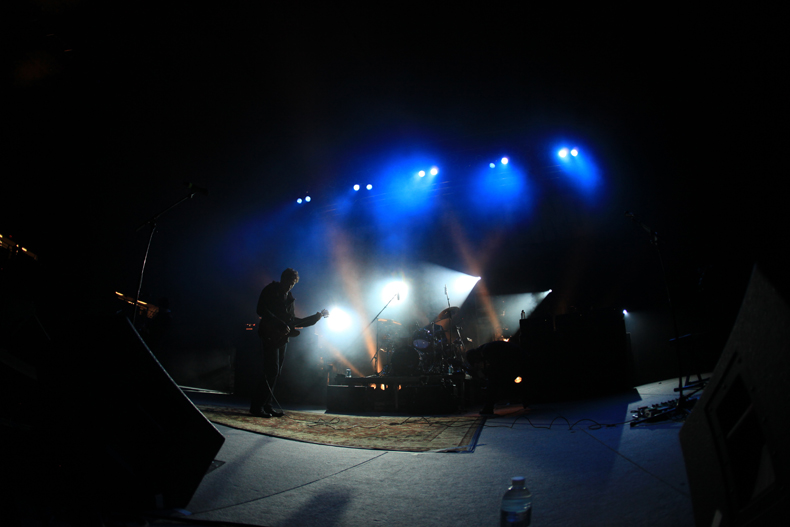 Truer words have never been spoken, and at the Feb. 4 Charter Day concert featuring Third Eye Blind, the whole crowd joined in chorus for those well-known lyrics.

In the second large-scale concert of the year — Big Sean’s homecoming performance was the first — Third Eye Blind played to a packed Kaplan Arena following opener Ben Kweller. The crowd for this concert was much more amiable, although the acoustics in Kaplan unfortunately made it a little hard to discern the beautiful voice echoing from Jenkin’s soulful lips.

“I’m really glad there were so many people there,” Jack Edgar ’15 said. “It made for a really fun and jamming environment no matter where you were seated.”

The concert was sponsored and organized by AMP, and tickets were open for purchse to the general public. In attendance were residents of Williamsburg, family members, boyfriends and girlfriends from other schools, and many families.

A select group of 100 lucky people were able to make it down to the floor in front of the stage, all swaying in synchronicity to the familiar, “Wish you would step back from that ledge my friend / you could cut ties with all the lies that you’ve been living in / and if you do not want to see me again / I would understand.”

The general consensus seemed to be that many people actually didn’t know many of the songs that the band played during their set, aside from the select few that debuted in the late ’90s with gusto and made it onto the Top 40. Although Third Eye Blind has obvious talent, the choice of band may not have been the best in that respect; because of their earlier peak of popularity, the band’s performance was geared more toward an older crowd.

“I heard mixed feelings about the concert,” Rory Siegel ’15 said. “Some said it was great, while others told me they didn’t have fun and couldn’t relate to any of the songs.”

Opener Ben Kweller was a surprising hit, as many of the more alternative rockers populating the College campus were in attendance and were already fans of his. However, much of the crowd did not know who he was and came simply to see Third Eye Blind. Those who were already seated at start stayed put for Kweller’s performance and talked amongst themselves, simply awaiting the arrival of the band.

During the switch between the bands, the audience started to get antsy as they all waited for the band to come on. Much gratitude goes out to the person who played the music in between the acts; it was a great selection and helped to calm the nerves of the crowd.

Once the lights flickered on and off, everyone began to fall silent, and students began to search for their friends before the lights went completely out.

A fan of Third Eye Blind myself, I can actually only own up to listening to a few of their newer songs, and I only know the lyrics to “Jumper” and “I’ll Never Let You Go.” Sadly, unable to hear many of the lyrics and with an odd disjointed flow between songs, the show wasn’t as exciting as I had anticipated.

The band is currently working towards finishing their fifth studio album but took a break to come and visit our campus; this could explain the preoccupied feeling of the show. The highlight of the night was drummer Bradley Hargreaves’s amazing drum solo set to a track of dubstep and hip-hop music — that was a real crowd-pleaser.

“I definitely thought the concert was a good experience because I was able to get floor passes and be right in front of the band the entire night,” Siegel said. “But I do think more people would have shown up if a more current band was there.”