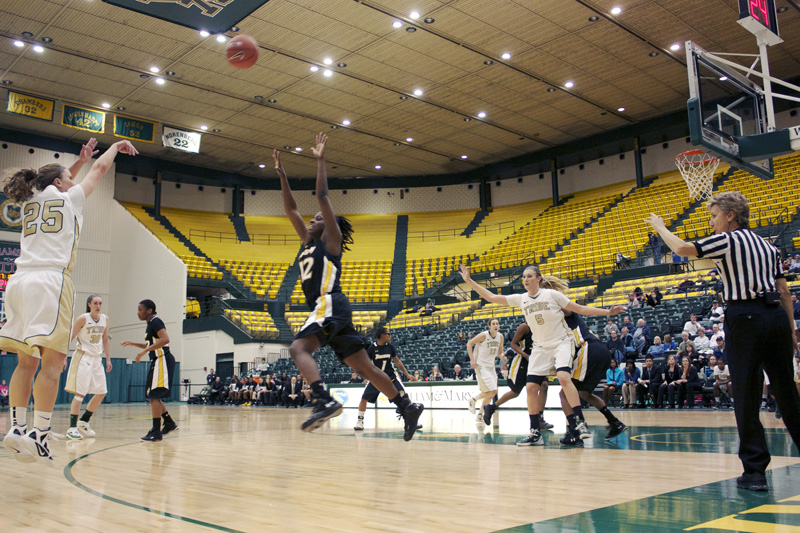 An uncharacteristically poor scoring performance led to a familiarly close loss Thursday as William and Mary dropped its fourth straight, falling at home to Towson, 56-50.

Shooting just 32.3 percent from the field, the Tribe (9-13, 2-9 CAA) was unable capitalize on open looks and extra possessions, winning the turnover battle 19-14 but getting outscored off of those turnovers 16-13. (More after the video).

“They made shots and we didn’t; that’s the difference,” senior guard Katherine DeHenzel — who finished with nine points, four assists and four steals — said. “We should’ve attacked the basket more; we were settling for outside shots.”

The Tigers (12-9, 4-8 CAA) led for most of the game, holding a six point lead with 5 minutes, 39 seconds to go in the first. But the College would battle back, and a jumper from junior forward Emily Correal — who finished with 10 points and two rebounds — cut Towson’s lead to just one before a basket from junior guard Janine Aldridge gave the Tribe a one-point lead at the 1:32 mark of the first. The Tigers responded when forward Deree Fooks picked Aldridge’s pocket and took it the other way for a go-ahead layup, closing out the half with Towson up 27-26.

The two squads traded blows in the opening part of the second, and a three-ball from DeHenzel knotted things up 31-31 with 17:19 left.

From there, the game went back and forth with neither taking more than a three-point lead. But with 4:29 left and Towson up just one, the Tigers’s offensive sparkplug, guard Krystal Parnell, converted a three-point play to put the Tribe in a four-point hole. Instead of responding with a basket the way it had all game, the College went ice cold, and Towson pulled away in the waning minutes.

For the next 3:13, the Tribe missed seven shots and turned it over twice as Parnell and company went on a decisive 8-0 run that put the game out of reach.

Parnell would finish with 11 points, four rebounds and two assists.

“We just haven’t made the plays down the stretch,” head coach Debbie Taylor said. “This is probably one of our worst offensive games … the ball didn’t move smoothly, there wasn’t a lot of great execution.”

Junior center Jaclyn McKenna said that poor timing has plagued the offense over the last couple of weeks.

“We’re playing hard, but we’re just not catching that spark at the end of games,” McKenna said. “We just didn’t really have that spark anywhere in the second half.”

The positive takeaway for Taylor’s squad is undoubtedly the solid efforts on the glass and the defensive side of the ball. For its own part, Towson shot only 42.9 percent and just barely edged the College in rebounds, 39-38.

“It seems to be we fix one thing, and we [have to] deal with another issue,” Taylor said.

Thursday’s was the latest in a slew of close conference games that haven’t gone the College’s way. With the conference tournament just under a month away, the Tribe has lost seven of its last 10 games by 10 points or fewer.

“We lose at the end of every game,” Taylor said. “It gets deflating after a while. We’ve just gotta keep our heads up, and we’ve gotta keep going. We’ve got the players to do it; we did it early in the year. We’ve hit this slump, and we’re not coming out of it, but every game presents a new opportunity.”

The College’s next opportunity will come when Drexel visits Williamsburg Sunday.