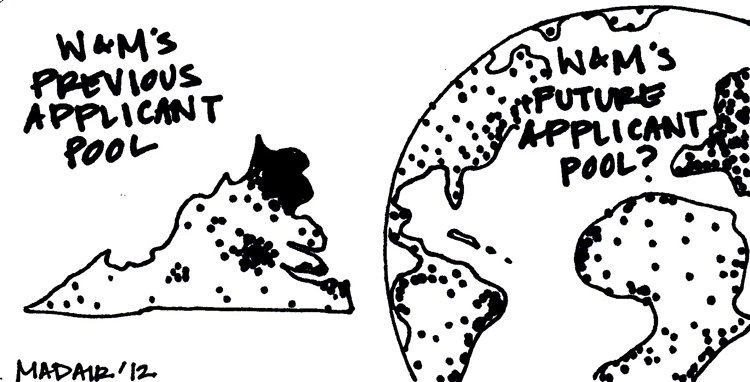 Tuesday, the United States Supreme Court decided to hear a case involving race-conscious admissions at the University of Texas. With this decision thrusting an affirmative action ruling from 2003 back into the spotlight, many speculate that the Supreme Court, which has become more conservative over the past nine years, may end preferential admissions based on race in higher education. As the office of admission at the College of William and Mary prepares to welcome the class of 2016, we must recognize that this decision could have powerful effects on future admissions processes.

At the College, we’re more comfortable talking about the in-state to out-of-state student ratios than we are about affirmative action, but the fact remains that all of these stipulations continue to have a major bearing on admissions. I believe that the terms of affirmative action need to be updated so that colleges focus on recruiting all students in order to have a broader pool of applicants from which to choose.

Revisions to affirmative action need to begin with changing the language to focus on economic disparities, as the heavy focus on race and gender only perpetuates existing tensions. Lack of opportunity is not an issue grounded in either race or gender; rather, it is founded in economic disadvantage. Colleges must shift the focus of their admissions policies to these true disadvantages in order to ensure that they have the strongest freshman class possible.

Students at wealthier high schools have greater access to college counseling resources than students at high schools with strained budgets. This monetary discrepancy, therefore, makes the very process of learning about different colleges difficult. As a student from the most southwestern part of Virginia, I am well aware of the fact that the geographical restrictions placed on the College by the state made the admissions process considerably less competitive for me than it was for some of my friends from Richmond. The lack of applications from my hometown, however, results from the fact that many of my classmates are simply not aware that the College even exists. If colleges take the initiative to reach out to a broader scope of students and to inform potential applicants of the opportunities that the institutions will provide them, they may find that affirmative action becomes less of a necessity.

Opponents of affirmative action seem to argue erroneously that diversity and quality are mutually exclusive. As long as the College continues to build its academic reputation, it can have the best of both worlds. The College has a long-standing reputation for academic excellence; this does not have to mean that it needs to sacrifice its focus on diversity.