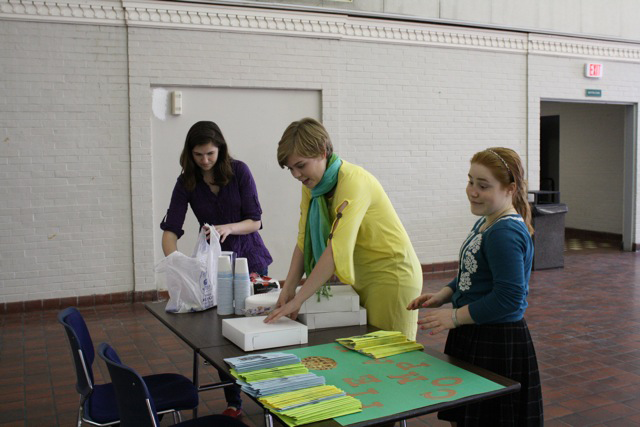 Barely visible, millions of narrow threads crisscross and intersect to create the things we wear. These inconspicuous threads weave together our daily appearance, connecting us through modes of expression and common ideas of fashion.

Students of this year’s Ethical Fashion seminar, which was part of the College of William and Mary’s Sharpe Community Scholars program, followed this thread further, beyond the clothing, through the hands of workers in the Mexican maquiladoras and export processing zones throughout the world, to the farmers planting and harvesting the resources that are used to make our clothing, such as cotton.

The Ethical Fashion students saw that what hang in our closets are stories woven together. What they also saw, however, were stories that made them distraught. They saw people in sweatshops that were working for substandard wages and being exploited under appalling conditions in factories that not only sustain a low standard of living for workers but also are harmful to the environment.

While some argue that although these jobs are appalling, they may be better than the other options that workers have, and that pressing for higher wages will simply result in further outsourcing, the Ethical Fashion students believe that it is possible to improve working conditions and that the actions of individuals can bring about positive change.

“I thought clothing being made in sweatshop conditions was common knowledge, but it’s not,” Bria Brown ’15, a member of the Ethical Fashion seminar, said. “I think the best thing you can do is to raise awareness and to open people’s eyes, and get them to realize that there is something people can do to help with this issue.”

The Ethical Fashion Show was part of a “restyled” campaign sponsored by Fair Trade USA, where sustainable and ethically made clothing was presented. The Fair Trade Festival hosted local vendors that emphasize ethical practices, such as the Alta Gracia lines sold at Barnes and Noble and New Forest Earth.

“A way to get involved with this issue is to look into these organizations, such as Fair Trade USA and Alta Gracia, that make it their mission to advocate for fair wages and conditions for workers — things that guarantee people a sound life,” Brown said.

“Fair Trade Certified Apparel not only benefits the farmers who grow the cotton, but also the factory workers who sew the garments,” Franzese said. “It offers consumers the unprecedented opportunity to positively impact the lives of farmers and workers throughout an entire supply chain.”

In addition, Franzese described how the Fair Trade model promotes sustainable development and emphasizes the voices of the communities in which workers and farmers are employed.

“Farmers in Fair Trade Certified producer groups are guaranteed a fair price for their crops, and are empowered to compete in the global marketplace through direct, long-term contracts with international buyers,” Franzese said. “This market access lifts farming families from poverty through trade — not aid — keeping food on the table, children in school and families on their land.  Farmers and workers are also paid an additional Fair Trade premium for use on long-term social and business development projects . . . Some farm groups have built schools, so their children don’t have to walk two hours to the nearest school house. Another group built a small lentil-processing mill, so they can earn more for their rotation crops and have healthier food for their families. In parts of India, the debt and desperation is so great that farmers have been committing suicide by ingesting their own pesticides. Fair Trade has given them hope.”

While organizations like Fair Trade USA promote better lives for workers, they are market-driven approaches and, indeed, their impact depends on the market for ethically made goods. The students in the Ethical Fashion Seminar hope to continue to spread awareness about such products through the Student Ethical Fashion Organization.

“We’re thinking in the future, we would like to do [an annual] Ethical Fashion Week,” Steiner said.

SEFO’s efforts are intended to push people to not only see the stories behind the clothing, but also how closely connected consumers are to these stories.

“The biggest thing to remember here is that it’s easy to make a difference — that your purchases really do matter,” Franzese said.