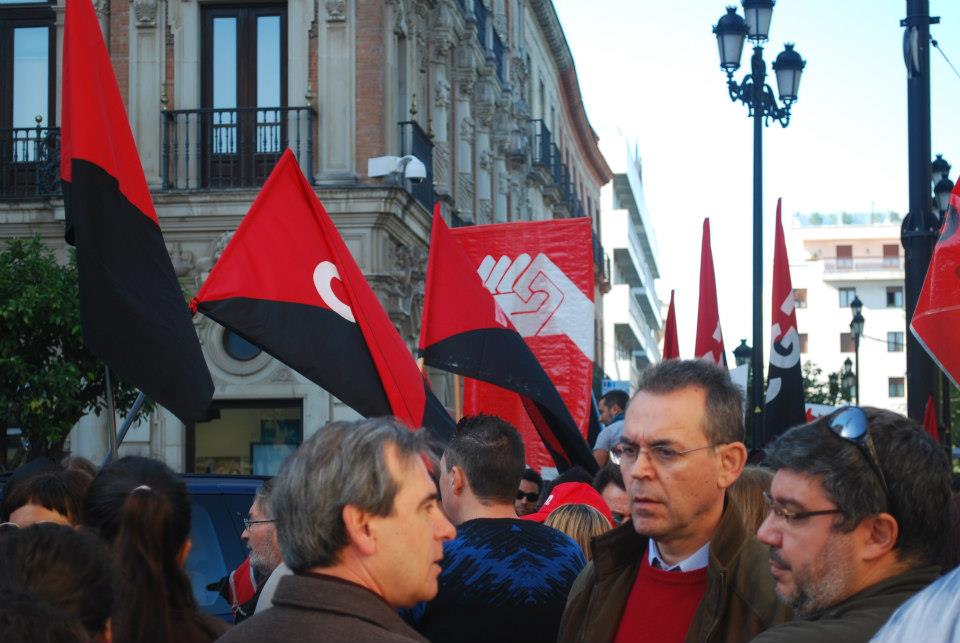 The steady rhythm of a protest march erased the standard slow beat of Sevilla, Spain on Nov. 14. Students, teachers, workers and trade union members marched past closed businesses through the main streets in step with thousands of citizens around the country and Europe in support of a general strike.

Spain, and other struggling European Union economies including Greece, Italy, Portugal and Ireland, face a series of intense budget cuts from the European Union trickling down to country governments. In response, citizens from these countries closed business doors and took to the streets in demonstration of their ongoing frustration for one day.

This is the second general strike in the past year in Spain alone. According to union organizers cited in Spain’s national newspaper, El Pais, 14.23 million workers went on strike for the day. Eighty percent of trade union members participated in the southern Spanish province of Andalucia with Sevilla as its capital.

In Sevilla, all forms of transportation provided minimal services for the day while protestors flocked to the streets. The two main universities in the city, University of Sevilla and Pablo de Olavide University were both closed. Spain’s current unemployment rate stands at 25 percent overall, but spikes to 50 percent among the youth population.

“The European Union is putting a lot of pressure on Spain and the Spanish government,” International Professor at Pablo de Olavide University Ana Claudio said. “I’m against the professor’s salary cuts, because for this year they are cutting our salaries by five percent.”

The College of William and Mary study abroad program in Sevilla sends students to Pablo de Olavide for a semester exchange. Students attend the international school alongside Spanish students, and some students chose to protest alongside them on the day of the general strike.

“The strike is protesting the budget cuts, which they protested by not going to work, but it really doesn’t make sense because their economy won’t get better if they are not working,” Ben Thomas ’14 said. “They want to make a lot of social changes but at the same time their society is already so different from ours being socialist vs. capitalist.”

In Rome, protests are commonplace, but on this day, American students studying at John Cabot University noticed a violent change in the crowds gathering outside.

“Protests happen here all the time, but this protest seemed out of the ordinary, mainly because of the helicopters. Everyone in my classes were freaking out,” American study abroad student at John Cabot University, Nicolle Draga said.

The unemployment rate in Italy hovers around 11 percent, but the majority of those unemployed are young people or recent graduates. During the course of the day, the demonstration grew from a peaceful protest to violent riots complete with battalions and tear gas.

“I appreciate it when people fight for their rights because they are fighting for me as well. Policemen are workers just like everyone else, yet we get separated and seen as the bad guys. People are only beaten if they attack the police force, otherwise we never use force,” Roman policeman Donato Zecca said.

Protests vary from transportation strikes, to protests directed at tax raises or against austerity cuts in Rome, but the sentiment of the people on this day was in unison against all of it. The people were trying to send one clear message to their government. The huelga, or strike, in Spain held the same meaning.

Sergio, a 14N organizer in Sevilla, believes that the problem is bigger than just the Spanish government, but the country’s government is equally responsible. He stood among protesters passing out slips of paper emboldened with black words stating “sin presente, ni futuro” or “no present, no future.”

“Who do you want to fight more, the mother or the father?” Sergio said in reference to the EU and the Spanish government. “It is a protest for everyone. Students, teachers, workers, firefighters, everyone is here.”