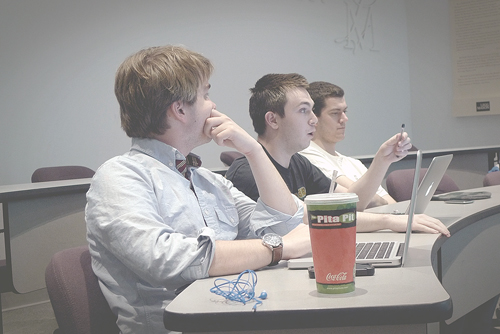 In the first meeting of the lame duck period, the Student Assembly senate proposed a variety of bills that would influence Homecoming tailgates, a possible visit from Glee’s Lauren Potter and proposed changes to the SA code regarding the Undergraduate Council. The senate also received updates about the City Planning Commission meeting and graduate student initiatives.

Waltrip organized a letter campaign and student speakers at the planning commission meeting and, in her synopsis, emphasized the importance of continued student presence.

“The feeling that I got from [city officials] was that they are very open to this idea but they definitely want to see student support,” Sen. Colin Danly ’15 said. “There will be people who are going to test this who are residents.”

The Williamsburg City Council’s next meeting is Thursday, April 11 at 2 p.m. in the Stryker Building.

“The way our funding works, we get checks the first of the month if we’re funded and in the summer we get one bulk payment to last us the entire summer, so by the time August comes around, we’re broke,” Yorimoto said. “We have huge health insurance payments due before we get paid. That’s just one issue we’re trying to figure out.”

To gain more support for sports teams, senators developed the One Tribe, Nineteen Tailgates Act, which will allocate up to $3,000 from the reserves fund to pay for fencing, trash cans and three guards if passed. This will allow nineteen student organizations to tailgate at the six home football games next year.

“At any school [at which] people actually care about their sports, they tailgate these games and William and Mary doesn’t have any safe way to do that or a cohesive way,” 2014 Class President John Bracaglia ’14 said.

Student organizations would apply for the 19 spots on a semester basis. Although the SA will require a thirty-person minimum, two organizations can apply together. Students over 21 will be able to drink their own alcohol.

“The general idea behind this is to increase the legitimacy of the undergraduate class president position, which right now is not as involved as it probably should be for a class president, and by doing so, really have them involved in the senate,” Sen. Drew Wilke ’15 said. “That way, they’ll know how funding works and generally what is going on and they can relay that back to their class.”

Finally, the Lauren Potter Act proposes to allocate $2,600 from the SA Activities and Events fund and $2,600 from the SA reserves to cover the costs of Lauren Potter’s visit to campus. This money will match the $3,100 already raised by Secretary of Health and Safety Jake Lewitz ’13 and Undersecretary for Disabilities Maggie Skorup ’15, who will receive $2,500 from the Center for Student Diversity, $300 from the Dean of Students’ Office and $300 from an Office of Community Engagement’s Community Engagement Grant.

Secretary of Finance Brett Prestia ’14 updated the senate on current SA funds — $21,534 is left in the Activities and Events fund and $29,017.59 remains in the reserves fund. Because less money was needed than was allocated for the Dalai Lama event, $3,800.96 was returned to the reserves. Prestia will merge two off-campus accounts, one of which he discovered earlier this semester from a previous administration, before the end of his term.