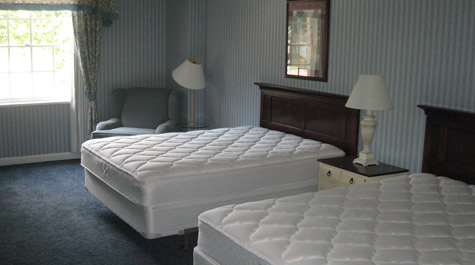 Rather than remain in the confines of the Board Conference Room, the Board of Visitors’ Committee on Administration, Buildings and Grounds took a tour of One Tribe Place Thursday morning.

Associate Vice President of Facilities Management David Shepard led the tour, describing the process behind making One Tribe Place as accommodating as possible for students. He also pointed out the places in the building that still need work. Since the decision to make One Tribe Place on-campus housing, $3.7 million has been granted to make it as student-friendly as possible.

The tour included a trip to the building’s unfinished basement, a peek into a student’s room and a look at some of the open rooms that were previously used for conferences and parties. One of the committee’s goals is figuring out what to do with the excess space in One Tribe Place.

“People on campus want to use this space,” Vice President for Administration Anna Martin said. “We can’t start that process until we find [out] what we need to do.”

Shepard also took the committee inside a student’s room so they could have a better visual on what the living quarters were like. The room included two full beds with mattresses, as well as the original hotel furniture, such as beds, bureaus and chairs, which are still in place.

“We weren’t touching anything we didn’t have to [during renovation],” Shepard said.

Although One Tribe Place, the biggest building on campus, transformed into a living quarters in a few months, Shepard said there is still a lot of work to be done. Some of the issues maintenance crews are tackling are fire safety and ventilation. They are also in the process of clearing out asbestos, which was found in the ceiling paint.

“Asbestos is safe if you don’t disturb it, but we disturbed it,” Martin said.

The committee also mentioned that laundry  machines are scheduled to be installed in the basement of One Tribe Place’s basement by January. In general, though, administrators said students have enjoyed living in the building so far.