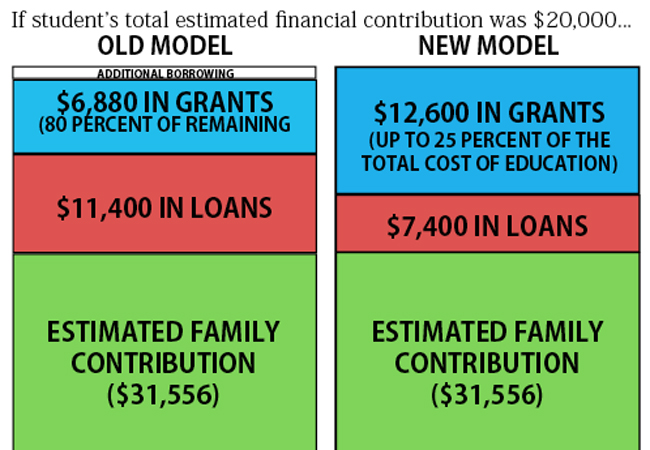 Out-of-state students are being offered a new financial aid package. Qualifying students can now receive up to 25 percent of the full cost of education through grant aid. The new package applies to students beginning their education at the College of William and Mary for the 2014-15 academic year.

This change comes as part of an effort to make financial aid more predictable and understandable for families. Other than grant aid, out-of-state students can receive additional support from the Office of Financial Aid through loans and work study  programs. Qualifying incoming in-state students can still receive up to 100 percent of their tuition through grant aid.

In the previous aid model, families received their estimated family contribution from the federal government after completing the Free Application for Federal Student Aid form. The EFC was subtracted from the cost of tuition to calculate the total financial need. Then, the first $11,400 was expected to be paid with loans. The College could provide up to 80 percent of the remaining need through grants.

For example, an out-of-state student with $20,000 in total financial need would have used loans to pay $11,400 and could have received up to 80 percent of the remaining financial need, or $6,880, in grants from the College.

Under the new model, the base loan amount decreases from $11,400 to $7,400 and the College will meet up to 25 percent of the total cost of education through grant aid. For the same student with $20,000 in total financial need, $7,400 could be paid through loans and they would receive $12,600 in grant aid from the College. At higher levels of financial need, a student might need to borrow more than $7,400.

The Office of Financial Aid says that the two models are not comparable.

Dean of Admissions and Associate Provost for Enrollment Henry Broaddus says two thirds of the accepted out-of-state early decision students were given better packages under the new system.

“Some students will be better off, and others will receive less in grant aid. In all cases we believe there will be greater predictability,” Broaddus and Irish said in a joint statement.

These changes will not apply to currently enrolled out-of-state students. Those students will be grandfathered into their old aid plans.

The cause of the change

Broaddus said that under the old model, the 80 percent figure was a source of confusion for prospective families. It led to difficulties in comparing packages from other institutions. The primary purpose of the new package is to better control a family’s expectations.

“Here’s the reality: We’ve never been able to meet 100 percent of need for out-of-state students the way we have for Virginians,” Broaddus said. “That’s an unfortunate reality that the College is well aware of.”

Administrators made the decision in fall 2013 to repackage the system. Sept. 12, the Financial Aid office updated the online net price calculator with the new changes. Broaddus believes this is the primary mode prospective students use to determine whether it is financially feasible for them to attend institutions. The deadline for applying through the early decision process was originally Nov. 1, though it was pushed back due to malfunctions on the Common Application website. The policy explaining the change was on the Financial Aid website until Dec. 2, four days before  early decision applicants were notified of their acceptance.

“In fact, I think that’s what predicated then some  additional traffic to that College Confidential thread. In a way, it  worked because people were noticing it there,” Broaddus said.

Broaddus said all of the deans from the Admissions Office can post from the College’s College Confidential account, but it is normally the job of one staff member. A College representative confirmed Oct. 30 that this was the correct number for questioning parents because of a new cap on grant aid.

After the College’s post, a current student commented that she was receiving $20,500 in grant aid this year, so it must be a new change. The College representative confirmed that they were in the process of reworking aid packages and that the changes would take effect in fall 2014.

Parents expressed their surprise in online comments and asked where they could find this information on the Financial Aid website. Dec. 2, the College representative responded saying the website was not yet available.

“The website is being constructed as we speak. Since it only applies to incoming students (and we don’t have any official incoming students for 2014 just yet) it’s not yet live,” the College representative said.

Despite what was posted on the site, Broaddus stated that the information was updated on the Financial Aid website Dec. 2 and the website went live on the same day.

Broaddus said that, while College Confidential is a good resource in many ways, it’s also a source of rumors. For that reason, the Admissions Office has an account to answer questions. However, the thread did not cause them to update the Financial Aid website.

“This is something that’s been talked about and rolled out, and we’re always adjusting the website based on any sort of sense of lack of clarity or feedback we’re getting. The College Confidential thread, I don’t think, was the explicit cause, but the timing was pretty near,” Broaddus said.

The Admissions Office makes it clear that early decision is an inappropriate option for those who are cost-sensitive. Despite the confusion on College Confidential, Broaddus thinks that between the language of the site about the financial commitment of early decision and the net price calculator, prospective students had enough information without an updated Financial Aid website.

With early decision, there is an escape clause for those who find their financial situation has made it impossible for them to attend the College, but it is not common. Broaddus noted that most applicants benefitted from the change.

“In fact, among the out-of-state early decision students that were admitted and will be here next fall, two thirds actually had better financial aid packages as a result of this new practice,” Broaddus said. “This was not something that deterred out-of-state students from enrolling.”

Broaddus stated that the Financial Aid and Admissions offices do not know how effective and beneficial the change will be. Every year, the College reassesses practices of both offices to make sure they are working for students and the College itself, but Broaddus thinks it will help the College.

“Big picture — we feel that this is a way to take a scarce resource and allocate it in a way that’s going to help us,” Broaddus said. “The truth is, the old method … spread financial aid dollars too thin. This enables us, we believe, to in effect concentrate them more and do a better job serving students that we can afford to meet their  need.”

The Admissions office wishes that they could meet more out-of-state students’ need, but Broaddus said meeting 100 percent of demonstrated need for Virginians is expensive. However, he said that the College has one of the lowest rates for students defaulting on loans.

“We don’t want them to leave here with crushing debt. We want to make sure that this is an affordable experience and open up all the kind of opportunities for them … without dragging that burden along,” Broaddus said.