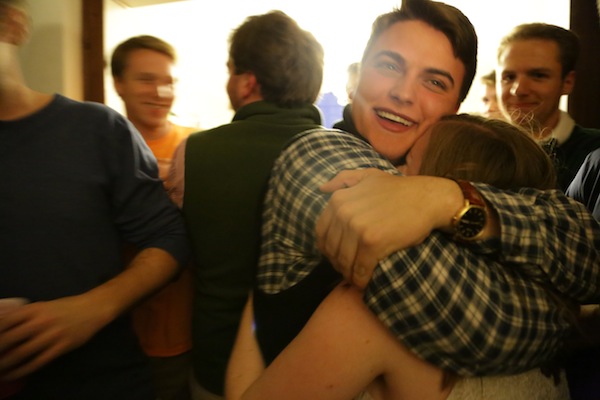 The votes are in and Colin Danly ’15 and Kendall Lorenzen ’15 have been elected the Student Assembly president and vice president for the 2014-15 academic year, winning 2,040 votes.

“Words cannot really describe how we feel right now,” Danly said. “We are so thankful and grateful for our supporters and our friends and the William and Mary community. We cannot wait to go out and just make this place better.”

Reflecting on the campaign, Danly and Lorenzen said it was a difficult process.

“There were times in this election process when we thought we were going to lose, there were times when it was hard and we had to face questions about our integrity and what we were going to do. And throughout this whole process we chose to be good people, we chose to do the right thing. I can tell you we will do the right thing for William and Mary,” Danly said in his speech upon winning the election.

Danly and Lorenzen said they are ready to go forward with the goals they outlined during their campaign.

Runner-ups Parkes and Hernandez received a total of 1,361 votes, 679 votes behind the winning pair. Although the duo was not elected, they do not have any regrets about their decision to run.

“I can’t say that I wish we’d changed too much,” Parkes said. “I think we did a good job the whole time, we really kept up our social media presence, we went around campus and met a ton of people. So, [it was] a great experience overall. When I first asked [current SA president] Chase [Koontz] if he thought I should run, he asked me if I would regret it a year later if I didn’t, and I still think a year from now I would much rather have run than not, so I can’t say I regret anything.”

Despite their own loss, Smith and Johnson look forward to working with Danly and Lorenzen in the future and believe that the new SA president and vice president will serve the student body well.

“[I have] full confidence in their leadership and have no doubt that Colin and Kendall will run the Student Assembly effectively and efficiently,” Smith said.

For the Class of 2015, 763 students voted, electing Chase Jordan, James Walker, Tyler Brent and Tyler Kennedy for SA senate seats. Jordan had 16 percent of the vote, the most of all the 2015 senate candidates. In uncontested elections, Alexandria “Joe” Foster will serve as Class of 2015 president, Daniel Kennedy will be vice president, and the treasurer and secretary positions went to Tyler Dunphy and Kameron Melton, respectively.

The Class of 2016 elected Mark Bland to serve as president and Brian Garland to serve as vice president. The officers-elect won by margins of 20 votes and 30 votes, respectively. Julian Kabat will serve as treasurer and Quetzabel Benavides will serve as secretary. Both ran uncontested. For the Class of 2016, Seth Opoku-Yeboah, Daniel Ackerman, Yohance Whitaker and Michelle Tansey were elected to the senate. The Class of 2016 had the highest voter turn out with 864 voters and they were the only class to have a contested undergraduate council presidential election.

For the Class of 2017, out of the five candidates for the position of senator, Eboni Brown, Emily Thomas, Elliott Theuerkauf and JC LaRiviere were elected. For undergraduate council, Pheobe Galt was elected president and John Yoest was elected vice president in uncontested elections. The class treasurer will be Giorgio Caterini and Secretary will be Emily Heath, both of whom also ran uncontested.