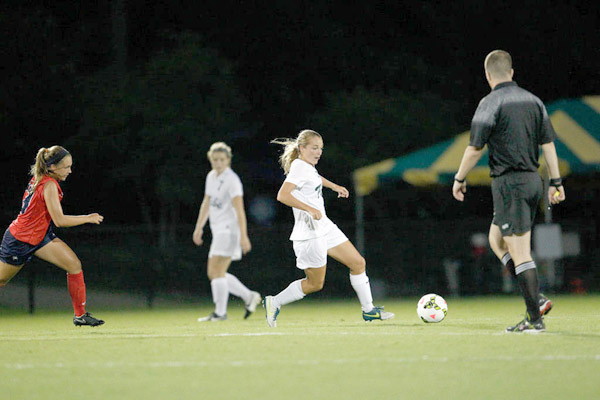 William and Mary scored a rousing 3-0 win over Pennsylvania Sunday afternoon in Philadelphia, the team’s third straight win over the last seven days. The victory comes on the heels of a 2-1 decision over North Carolina State and a 4-1 decision over Richmond.

“We were pretty worthy winners,” head coach John Daly said. “Overall, the defensive play and midfield was certainly in command the majority of the game.”

Making seven saves of her own, junior goalkeeper Caroline Casey gave up nothing for her second clean sheet of the season. After leaning on its stellar backline for most of last season, this year’s less-experienced group has shown few signs of weakness during its recent winning streak. The Tribe has given up just two goals over its past three matches, though it surrendered seven in the two prior matches.

“The first couple of games, we gave up opportunities that we probably wouldn’t have given up last year, but they’ve been able to learn each other’s strong suits and become more of a unit,” Daly said.

Moore’s goal came in the 10th minute off a deft pass across the goal box from junior forward Samantha Cordum. Moore bashed the shot through the left corner of the net for her second goal of the season. Just four minutes later, Moore fired another shot that Terilli bumped away, but landed in front of Shaughnessy for an easy goal, her third of the season.

“You’re always happy if you’re creating chances,” Daly said. “It gives you some cause for optimism and then in those games where we were scoring a lot we were creating opportunities. We just need to be more clinical in our finishing.”

The College took a 2-0 advantage into halftime, though the lead could have been higher. Compared to the Quakers’ one shot on-frame, the Tribe totaled seven through the first 45 minutes.

Penn attempted a comeback in the early stages of the second half, but Casey proved too difficult an obstacle. The 2013 first team all-conference honoree snuffed out repeated chances, accumulating six saves in the period.

Johnston cemented the victory in the 82nd minute off a header from junior midfielder Nicole Baxter’s free kick. The header marked her first tally of the season.

One conspicuous factor in the Tribe’s success so far has been the outsized production of its freshmen. Five freshmen started the match for the Tribe and contributed a total of four shots on goal, including Moore’s early goal. Last week, Moore won the Colonial Athletic Association Rookie of the Week honor.

“I was delighted to get this recruiting class,” Daly said. “We knew what they were capable of. It’s always a question if they’re going to be able to adjust to the college game. That was apparent in the first few games, but they’ve been superb since then.”

Shaughnessy was awarded the conference Player of the Week Monday following her three goals over the past two games.

The Tribe plays at Davidson Thursday night, hoping to add to its recent winning streak. The match is scheduled to start at 7 p.m.