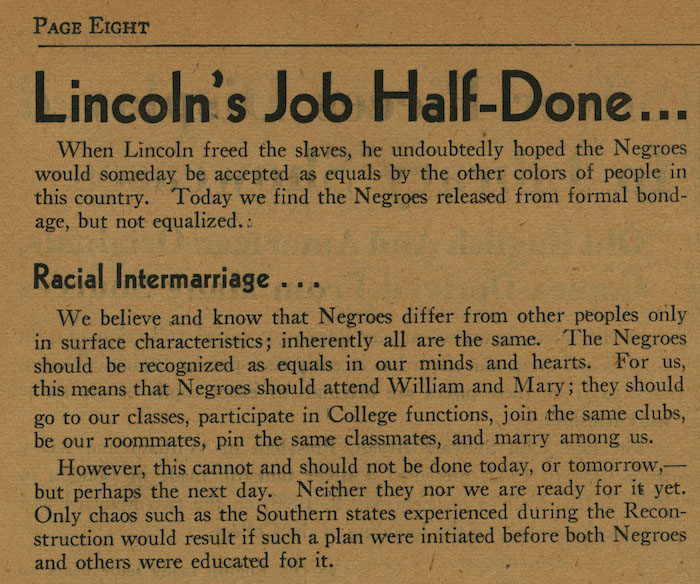 Two Supreme Court cases finally began the conversation about the admission — but not the integration — of African American students into colleges in the 1950s.

The first case was McLaurin v. Oklahoma State Regents, in which George McLaurin was denied admission to the University of Oklahoma to achieve his Doctorate of Education. He was successful in winning the case; however, he still had to have and use completely separate facilities at the university.

The second case, Sweatt v. Painter, successfully challenged the premise of the separate but equal rhetoric. Marion Sweatt had been denied admission to the University of Texas’ School of Law on the grounds that there were no integrated educational facilities. Because of a lack of separate facilities for his intended degree, they would not admit a black student. The Supreme Court ruling held that Sweatt must be admitted — there would be no way to give him an education that was equal to that of his white classmates if he were in a separate facility.

“The McLaurin and Sweatt cases referred to the attendance of students in graduate school,” Distinguished Alumnus Wilford Kale ’71 said in an email. “The University of Virginia admitted its first African American student, Gregory Swanson, to its law school after Swanson sued U.Va. for acceptance.”

It wasn’t until 1951 that the College of William and Mary admitted its first few African American students. Hulon Willis Sr. M. Ed. ’56 was admitted to the graduate school of education in 1951, and Edward Travis B.C.L. ’54 was admitted to the Marshall-Wythe School of Law around the same time. Travis was also the first African American student to receive a degree from the College.

Following Brown v. The Board of Education in 1954, Virginia’s general stance on integration in public schools was still resistant. As a public university, the College had similar sentiments — and it did not admit African American students into its undergraduate student body immediately following the ruling.

“The only place that wasn’t segregated in Williamsburg was Colonial Williamsburg,” religious studies professor David Holmes said. “When the Rockefellers came and renovated, this was one of their requirements.”

“There were absolutely no protests regarding the admission of African Americans to William and Mary. I was here and know that for a fact,” Kale said. “The culture was a white-related culture, for both students and administration. [Blayton] was warmly greeted by some students, but totally ignored by the majority. Oscar really found it difficult to become part of the existing William and Mary community. I know because I knew him.”

“By 1968, a more active minority-recruiting program had been established, and by 1970 the Black Student Association had been founded ‘to promote black awareness on campus by encouraging black life,’ as the Colonial Echo said,” Kale said.

Holmes advised African American student Warren Winston ‘72 — who also happened to be the first African American football scholarship player — in 1968. Throughout these years, he was able to observe students and their reactions to these changes.

“In 1965, Williamsburg schools were still segregated, and you could see signs of this everywhere,” Holmes said. “By the 1960s segregation was on its way out, and the Williamsburg community and College staff and students adjusted to meet these new standards. I don’t know any statistical information about it, but I had a sense that the majority of the students I taught were in favor of integration.”

Holmes told stories of how the faculty at the College at the time refused to frequent shops and restaurants that were discriminatory toward black people.

“Word went around which barbers shops were integrated and which weren’t,” Holmes said. “If there were any places that denied service to blacks, the faculty as a whole would learn about it and would no longer give them our business because we didn’t support segregation.”

Throughout the 1970s, partially due to Title IX and the Virginia Plan, the College made more concerted efforts to overcome racial discrimination. The College also committed to enroll over 150 percent more minority students, and it began to hire African American faculty and staff.

It is important, Holmes says, to be knowledgeable about the College’s past.

“The four years you spend in college should be — and usually are — very important. You try on different hats and are exposed to different things,” Holmes said. “It is important to know how good your school really is and what sort of stances it has taken in the past.”