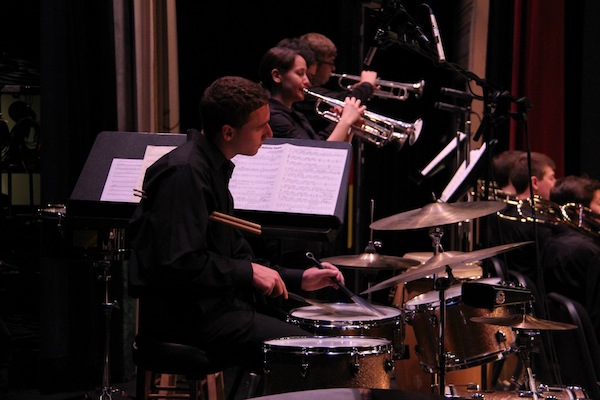 While some students may have been hitting the books, “hip” twamps were down at the Kimball Theatre on Sunday evening to listen to some swingin’ tunes.

The College of William and Mary’s Jazz Ensemble and Jazz Combo’s fall concert this past weekend succeeded not only in getting the audience’s feet tapping and hands clapping, but also showcasing the College’s unique musical talents.

The Jazz Ensemble started out the show with “Nostalgia in Times Square,” a chaotic number that immediately inducted the audience into the “big band” sound of classic jazz. For the next half hour, the Kimball auditorium was transported back in time to jazz’s golden age.

While all the tunes featured the characteristic thumping heartbeat of the stand-up bass and the mellow, metallic sound of the brass section, each piece in the set demonstrated a different style and subset of the overarching genre. “Stolen Moments” sounded like the soundtrack to a film noir detective novel, while “Saint Thomas” evoked a sunny Caribbean tone. The songs were infectious; they easily got the audience swaying along within minutes.

The ensemble’s final piece, “Things Ain’t What they Used to Be” by Mercer Ellington, was a magnificent tour de force of technical skill and creativity. The bright brass sound filled the theater, and the performance’s high energy made the audience want to jump up and dance. Pianist Liam Farrell ’18 performed a stunning solo, sprinkling in glissandos which keyed up the energy and earned whoops and whistles from the crowd.

After a short intermission, the William and Mary Jazz Combo took the stage. This smaller group delivered a more personalized, intimate performance. While the Jazz Combo didn’t exude the same classic big band sound common to the genre, it did focus more on exhibiting the individual musicians and their instruments. The Combo’s pieces featured brilliant solos on trumpet, saxophone and piano. Director Harris Simon even treated the crowd to a bluesy harmonica solo on a piece he wrote himself, “Blueprint.”

The smaller style of the Combo also allowed for more improvisation and experimentation with the pieces. They switched up instruments on several instances, using bongos to give their performance of “Caravan” an exotic touch and sometimes switching to electric bass or guitar to create a more rock-inspired sound. Matt Abel ’16 performed an entire solo piece called “I Love You” on the stand-up bass, accompanied only by Simon on the piano and Waverly Langston ’15 on the drum set.

There were a few repeat songs from the first set; however, the contrast between the Ensemble and the Combo’s arrangement added an intriguing dimension to the performance, displaying the diversity of style that is unique to jazz. It was interesting to see how the same song could be interpreted in two different ways.

All in all, both groups did a fantastic job and certainly added a little spice to an otherwise sleepy Sunday evening. What makes jazz such an enduring style of music is its ability to simultaneously encourage collaboration and individual accomplishment, and both the Jazz Ensemble and Jazz Combo performances exemplified this. Jazz can sometimes be dismissed as a thing of the past, but it continues to grow and change today; it was the inspiration for countless other styles of music, including rock, hip-hop, Latin and many other modern genres.

It is also simply fun to listen to. All of the band members nodded and tapped along as they played. With such an obvious display of enjoyment from the performers, it is hard to resist enjoying yourself just watching and listening. In the hands of such capable and enthusiastic musicians as we have here at the College, it is easy to see how jazz can be one of the liveliest and most inspiring musical genres.