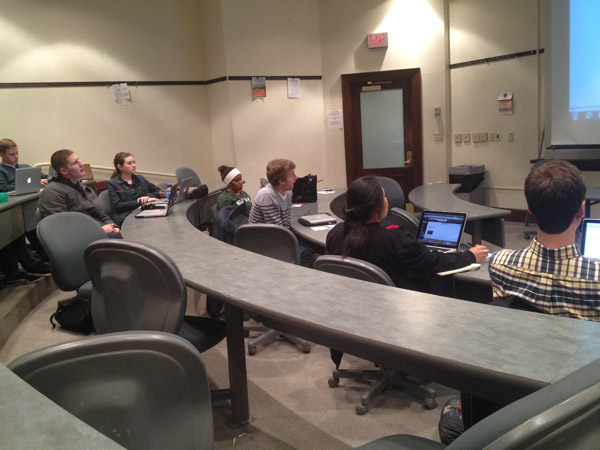 The College of William and Mary’s Undergraduate Council held its last meeting of the semester Dec. 2.

In the meeting, the council discussed two major projects: the continued sale of homecoming t-shirts and a Road to Richmond information session. Members also offered views on this semester’s successful initiatives and what they hoped to improve in the coming semester.

Despite numerous attempts to sell homecoming t-shirts this semester, the council still has extra shirts.

The council had hoped to sell these shirts during the Intervarsity Christian Fellowship’s popular Pancake House event, which will be held Friday, but were told that the sale would not align with the event’s mission.

“[The president of Intervarsity] said that they use their event as an outreach tool, and they’re trying to focus on providing something to the campus for free,” Sophomore Class Secretary Emily Heath said.

Instead, the council will sell shirts through an online storefront which will be available soon. Shirts will cost $10.

The council’s other major project is a Road to Richmond information session, sponsored by the sophomore class. The event will be held today from 5 to 7 p.m. in Blow 332.

The Road to Richmond event organizes an expedition of students who travel to the Virginia state capitol and discuss issues impacting students with state legislators.

According to the information session’s Facebook event page, “Road to Richmond is an event sponsored by the College administration and the Student Assembly to promote civic engagement on behalf of the school. An opportunity to voice student concerns and make an impact on our entire community, Road to Richmond is open to everyone.”

Virginia Senator Tommy Norment and Associate Vice President for Government Relations Fran Bradford will be speaking at the information session.

Representatives from each class also discussed their classes’ upcoming projects.

Acuna also shared a revised plan for a joint freshman and sophomore winter formal. Originally, the two classes had planned to host the formal at the Alumni House Jan. 31.

“Now we are hoping to [hold the formal] on Feb. 28 in the Wren Building, utilizing the Great Hall and the outside area, [and] hopefully saving us about $500,” Acuna said.

Junior Class President Mark Bland ’16 discussed his class’ upcoming ring ceremony. The ceremony’s speakers will be chosen by the end of this semester; juniors will issue invitations to the ceremony following winter break.

The senior class is planning a beer tasting event at the DoG Street Pub. Students would have to pay admission to the event, as on-campus funds could not be used to arrange the tasting.

In addition to discussing upcoming events, the council reflected on the fall semester and looked ahead to the spring.

“We got a lot of footing and kind of an understanding of how [the] Undergrad[uate Council] works,” Bland said. “I think Undergrad as a whole is getting a grasp on working together.”

Freshman Class Vice President Nick Perrone ’18 pointed out inadequacies in inter-class communication, but said that the freshman class had implemented many good ideas. He said that he hoped the council could improve on getting organized early in the semester.

To conclude the discussion, Chairman of the Senate Daniel Ackerman ’16 shared his thoughts on the council.

“There’s been a better conversation this year in [the] Undergrad[uate Council],” he said. “Everyone’s taken a step back from their roles and thought about the whole process altogether. Everybody’s had a very thorough and honest discussion about what they see as the role of the Student Assembly and Undergrad.”