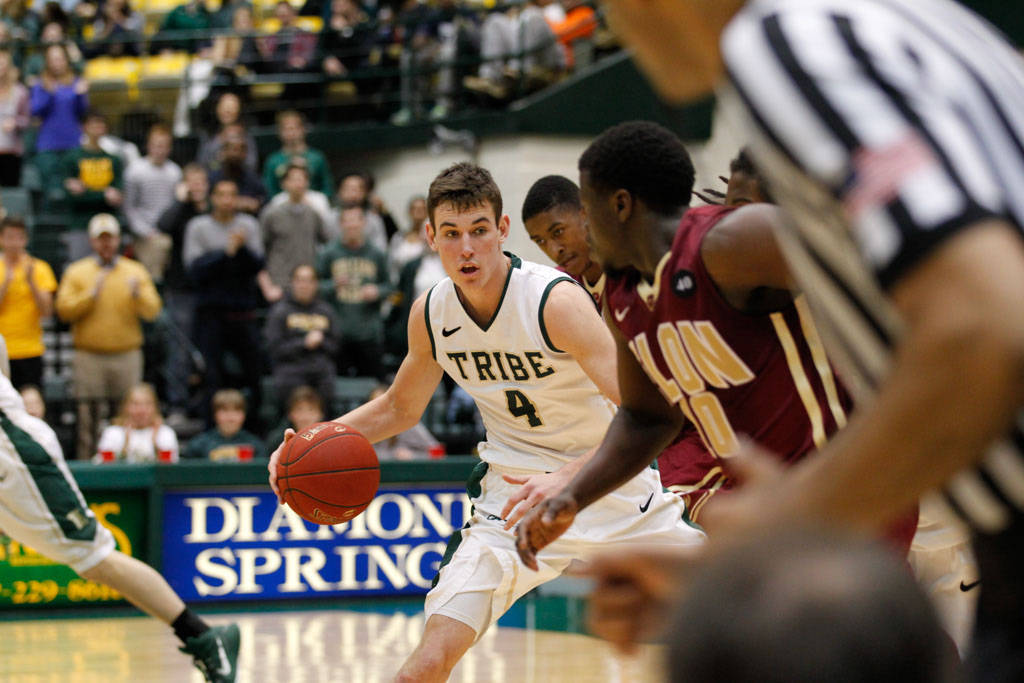 No. 1 seed William and Mary moved a step closer to the ever-elusive NCAA Tournament berth Saturday, cruising to a 72-59 win over No. 8 seed Elon. The Tribe led for nearly 38 minutes of game time, sprinting to a double-digit first half lead and never allowing the Phoenix to rally.

With the win, the College (19-11, 13-6 CAA) advanced to the semifinals of the Colonial Athletic Association Tournament at Royal Farms Arena in Baltimore, Md. The top-seeded Tribe was expected to easily overcome the Phoenix (15-18, 6-13 CAA), and advanced on the leadership of senior guard Marcus Thornton, the CAA Player of the Year.

“Good win for our guys, no question about it,” head coach Tony Shaver said. “I think the thing that I’m most pleased about is that…we talked a lot this week about being aggressive and playing without fear, and I thought our kids looked pretty relaxed and pretty confident on the basketball floor tonight.”

Good win for our guys, no question about it,” head coach Tony Shaver said. “…I thought our kids looked pretty relaxed and pretty confident on the basketball floor tonight.”

The College started slowly, mustering only five points in the first three minutes as Elon snatched an early 6-5 lead. However, the Tribe found an unlikely contributor in freshman guard Connor Burchfield, who hit two triples in 20 seconds to take the College to an 11-5 lead that it never relinquished. The Phoenix then rebounded from the early deficit, using a scoring run to cut the Tribe lead to 29-26 with two minutes left until halftime.

The College calmly deflated Elon’s confidence before intermission. Tarpey and Thornton hit layups on consecutive possessions to run the lead to 33-26. Thornton stuck a dagger in the Phoenix’s comeback bid by hitting a three-pointer a second before intermission. The three, a contested prayer of a shot, gave the College a 36-26 halftime lead and capped a 7-0 run for the Tribe. Thornton was pleased with the College’s balanced first half effort.

“We have a lot of guys that make a lot of contributions,” Thornton said. “It puts a lot of pressure on opposing teams, because defenses can’t just focus on myself or any one person; they have to stop our team as a whole.”

The College continued to surge in the second half, using an early 15-2 scoring run to stretch its lead to 55-35 and effectively spell doom for the Phoenix with 12 minutes to play. Though Elon repeatedly cut into the massive deficit and whittled the Tribe lead to 61-50 with three minutes, 28 seconds to play, Dixon hit a critical three-pointer to extend the College’s lead to 64-50 and effectively seal the win. Six Tribe free throws and a Tarpey layup finished off the College’s 72-59 victory and ensured a berth in the conference semifinal.

“It’s tournament time, and everybody is excited to play,” Thornton said. “Coming in as the number one seed, we have a lot to prove, and we’re ready to go out and win a championship.”

“It’s tournament time, and everybody is excited to play,” Thornton said. “Coming in as the number one seed, we have a lot to prove, and we’re ready to go out and win a championship. We’re just taking it one day at a time, one game at a time, just being focused and mentally prepared.”

Next up for the College is a showdown with No. 5 seed Hofstra. The College defeated the Pride twice in the regular season. Tipoff is set for 2:30 p.m. Sunday afternoon in Baltimore, Md. If the College wins, it will play in the CAA Final at 7 p.m. Monday night.