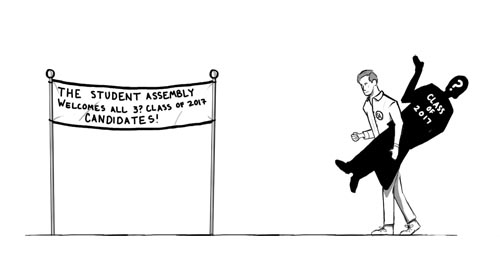 The lack of candidates for the class of 2017 is a major concern for the competitiveness of SA elections in general. Without enough candidates to fill all four positions, its elections are essentially already decided. The lack of pressure from a larger pool of candidates could have unfortunate consequences; competition is necessary to ensure that decisions are based on qualification and merit. In general, uncompetitive elections are those in which candidates do not earn their positions, and it is entirely possible for an unqualified and undeserving candidate to win. When running unopposed, candidates also lack the incentive to run high-quality campaigns and this can translate to low-quality work within the organization itself. The lack of competition within the class of 2017 could hurt the efficiency and quality of SA as a whole.

The dissolution of the Undergraduate Council, an entire branch of Student Assembly, was expected to increase election competition. It was thought that the elimination of those twelve seats would push interest from running for Undergraduate Council toward running for other parts of SA. The lack of increased competition within the classes, with the exception of the class of 2018, suggests otherwise. It raises concern that there may be underlying problems preventing SA elections from being competitive, such as student awareness.

The disparity between the classes of 2017 and 2018 — the latter able to attract more than three times the candidates for its number of available of seats while the former is unable to garner the minimum necessary — suggests that student awareness of SA may be crucial. Student Assembly’s most recent attempt to raise awareness, its Beauty of Branding Act, seems misguided in the face of this disparity. The branding act allocated $6,000, or 10 percent, of Student Assembly reserves, to purchase branding materials to promote SA on campus. The branding was targeted at expanding awareness of the services SA provides, as well as increase attendance at SA-sponsored events — such as elections. The lack of increased participation from the older classes attests to the ineffectiveness of the act. However, the relatively large participation of the class of 2018 could suggest that branding just isn’t being advertised equally among the classes.

We fully supported the dissolution of the Undergraduate Council as a meaningful and reflective step forward on the part of SA. However, it is obvious that there remains a lot of headway to be made to raise interest in participation.

Tucker Higgins did not participate in this editorial because he was traveling.