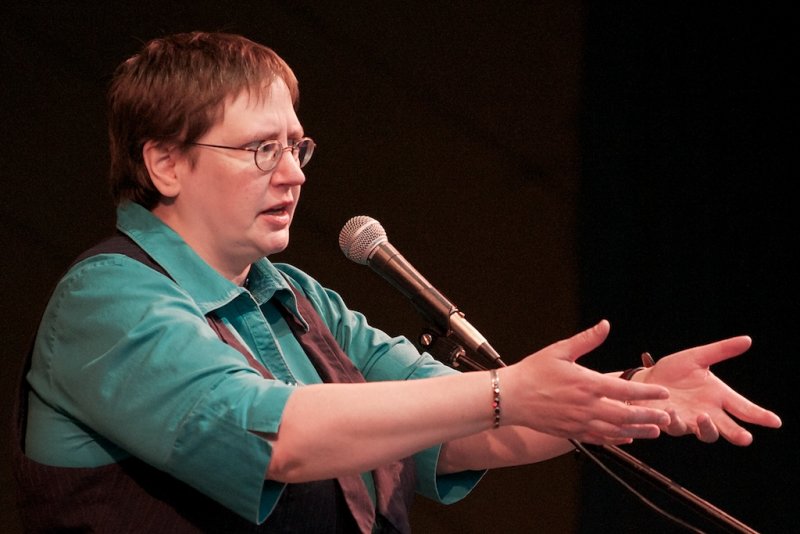 For the second year in a row, the student-run group Someone You Know brought Nancy Donoval, a sexual assault activist and speaker, to the College of William and Mary to discuss her experience as a survivor of sexual assault.

Donoval has worked as a professional storyteller for more than 25 years. Her talk at the College, covering her own experiences with recovery from sexual assault, is just one of the many stories Donoval tells to colleges and organizations across the U.S.

Someone You Know decided to bring Donoval back this year based on the positive feedback her talk received from the College last time.

“It’s an unbelievable privilege for us,” president of Someone You Know Sam Dunham ’15 said. “It’s tough to find the words sometimes, and [Donoval] is someone who’s very talented at it.”

Before her speech, Donoval had a chance to interact with the audience. She came up to a group in the front row and thanked them for not being afraid to get close to the stage.

Sam Brown ’15, a member of Someone You Know, introduced Donoval, describing her as a speaker who has “tirelessly” toured the country to spread awareness about sexual assault.

“I don’t know if I would say tirelessly,” Donoval said.

Donoval said she would be at the College until Friday to stay for an activist workshop with HOPE and attend the group’s Take Back the Night event on Thursday.

Donoval began her own story, which she calls “The Road to Shameless,” with how, when she was a teenager, a bump began to grow on the top of her head. She compared the bump to a unicorn horn, an animal that is usually associated with virginity in myths and legends.

“I had wanted my virginity back for so long,” Donoval said, “that I thought maybe my body wanted it back so much it was turning me into a unicorn.”

Donoval then talked about her personal experience with sexual assault at the hands of a friend. The majority of her talk centered around her recovery and the different strategies she went through to try to get past it.

She said for a while she tried to pretend her perpetrator did not exist.

As Donoval described eventually reaching out to family and friends, she said that not all the resources available today were available to her, including the internet and campus organizations like Someone You Know.

Donoval said therapy and going into storytelling helped her make great strides in her recovery. She talked about how “the rabbit hole” she felt stuck in started getting easier to get out of when she met other survivors.

At the end of her two-hour talk, Donoval opened up the floor for questions. She even gave the crowd her cell phone number, saying if anyone felt more comfortable anonymously texting her a question they could feel free to do so.

Donoval answered several questions about how universities and peers can help survivors. She stressed listening and that above all, each survivor is different.

“We’re not gonna do it exactly right,” Donoval said about helping survivors. “And there is no exactly right.”

Donoval also commented on the steps campuses across the country take to prevent sexual assault.

Once done with questions, Brown thanked Donoval on behalf of Someone You Know for returning to campus.

“[Donoval] has a nice way of putting it together holistically,” Brown said. “In college … you don’t get to capture it top to bottom. You just see the experience as it’s happening.”

Jacob Deel ’16, another member of Someone You Know, said it can be helpful to hear about a survivor’s story in retrospect.

“A lot of her story is about how people in her life were not supportive,” Deel said. “She can help teach us how, as a campus, we can create an environment where survivors can feel comfortable.”