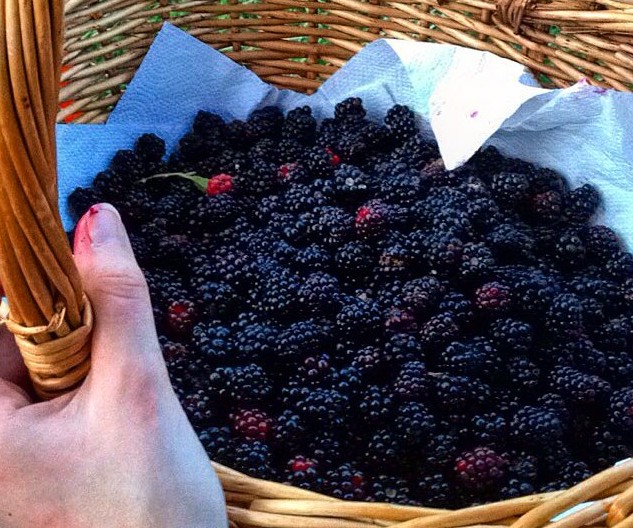 Tom, in well-worn, hunting-pattern camouflage pants, met us at the gate as soon as the Jeep’s ignition shuddered into stillness in his farm’s driveway. We had come armed with baskets and cast-off football concession buckets and high hopes for sweet summer fruit. We had come for blackberries.

A farm vehicle — a golf-cart like contraption with teeth, lungs and half a truck bed — went out of its way to catch kindling-thick thistle stalks between gates and an evening cattle feeding stop: “More fun than bush hogging.”

The sun had started its late afternoon walk down from the lofty attic of the crystalline blue heavens, so we had escaped the stickiest heat of its mid-afternoon golden tendrils. The sound of cattle beginning to sidle to the places they had chosen as their own for night — a presence, more than anything, that was entirely audible — marked time in perfect somnolent step with nature’s equally lethargic change of guard. We could hold the last of the daylight’s hours in our hands; blackberry patches sprawled out along the fence line or clustered in a space large enough to fill an average-sized bedroom implored us not to waste those last rays. And we had no intention of doing so.

We could hold the last of the daylight’s hours in our hands; blackberry patches sprawled out along the fence line or clustered in a space large enough to fill an average-sized bedroom implored us not to waste those last rays.

Within twenty minutes, an army of five had gathered to descend upon the bushes coated in needle-like prickliness. Even the undersides of the leaves, so creamy and tender in silver-green delicacy on most plants, grew a crop of thorns as vicious as puppies’ teeth. Plump, black and visibly sweet tart, the most impeccable berries looked down on me — the shortest one of our brigade — from their perches where they clustered together with the goading satisfaction of my short arms. With tense fingertips strategically positioned on a stalk, barely daring to touch a thick limb for fear of an unseen spike, we would move aside a wisp of a bush to pluck at the outermost fringe of its interior. Occasionally a cry went up from one of our number: a sharp yelp of unanticipated stinging pain as if the bush, of its own accord, had swatted its attacker back in admonition.

Brambles clutching at bare skin and the soft cotton of our old shirts could not keep us from the clusters of purple-hued onyx hanging within our reach. With his characteristic wry wit, Tom declared that, “You couldn’t pick blackberries without getting a little blood on them.”

I once heard that same wit from an interview with a veteran stock car driver, who stated that he’d be disappointed if the other drivers didn’t leave from qualifying at Darlington without stripes running the length of their cars — stripes, in this case, being a souvenir of paint from an uncontrolled encounter with the wall.

Sweat sparkled in clumps of dew around our hairlines as we moved through the late-July humidity, and the soon-tiring Madeleine and I had long tresses behind our ears, twisted in multiple, unidentifiable formations, laden and fluffy with the film of Virginia heat. Halfway through the picking, the line between fingertip and blackberry blurred: Skin had grown accustomed to the lance of the thorn, and hands now the color of spring violets commuted from bushes to respective containers.

We continued doggedly — but in merry conversation, the type that flows naturally from lips whose bodies are engaged in light labor and is simultaneously continuous and separate — from one island of thorns and sweet tufts of juice to the next.

We continued doggedly — but in merry conversation, the type that flows naturally from lips whose bodies are engaged in light labor and is simultaneously continuous and separate — from one island of thorns and sweet tufts of juice to the next. Each had her own rule for when to eat a berry instead of depositing it in a container. Jokes about the inability to distinguish between blackberry stains and blood on a faded veteran bag of squirrel hunts filled the time. Conversation tended to subjects that hadn’t graced my ears since leaving the Valley for the metropolitan-inclined population of a college campus:

How many dogs should one bring when hunting the black bears that lumbered seemingly haphazardly through the mountains?

When did the licensing system for bear hunting change?

Discussing the importance of learning to fillet a fish after cleaning it.

Stories about stabbings, diffused gun fights and moonshine from the alluring and unsavory hamlet at the western edge of the county.

The music of baying hounds from neighboring property served us well in the absence of our broken transistor radio as their throaty bellows carried and faded from our ears.

With full baskets and content faces, we turned back toward the golf cart with teeth and lungs. With a tacit understanding that we had all grown up in the most wonderful place in the world — one filled with the sanity of rural common sense so far removed from our lives outside of this place — and the realization that we would have to leave this place to seek our futures, we arranged the bounty we had collected and rearranged the previous contents of the vehicle. None blinked at the emergence of what was small enough to be a .22 as it was cradled onto a shoulder for transport. There were a-little-bit-older-than yearlings to be counted and gates to be opened, shut, and latched as the sun darkened in dusk just before setting.

And there was blackberry jam, wine, cobbler and pie to think about making.

And the blackberry bushes in their now-restful state met the tide of darkness that would ebb into a golden dawn and drip color into the still blood red berries like a fountain pen slowly diffusing blots of inky blackness onto paper.