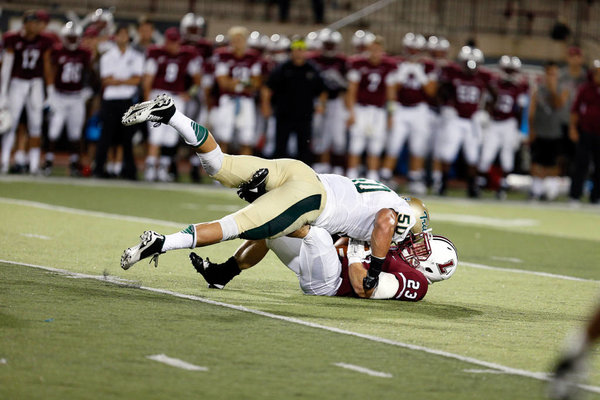 As far as setting the tone goes, William and Mary had perfect pitch on Saturday, defeating Lafayette soundly with a score of 34-7.

After a slow start in the first half, the Tribe (1-0) shut out the Leopards (0-1) in the second half while putting up 20 points of their own. Head coach Jimmye Laycock said he was pleased with his team’s performance.

“I don’t know if it was any one thing, we just kept on playing,” Laycock said to Tribe Athletics. “We have confidence in ourselves and felt like if we played like we were capable of, we’d be alright. It was a good indicator for a first game. We were a little erratic; a little hot and cold with some areas, but for the most part I’m pleased.”

After Lafayette and William and Mary exchanged punts during the first two possessions, the Leopards drove deep into Tribe territory. Lafayette quarterback Blake Seafross threw a fade into the endzone, and sophomore cornerback Aaron Swinton was there to make the first big play of the game, reading the ball perfectly and coming down with the interception.

We have confidence in ourselves and felt like if we played like we were capable of, we’d be alright,” Laycock said to Tribe Athletics. “It was a good indicator for a first game. We were a little erratic; a little hot and cold with some areas, but for the most part I’m pleased.”

The Tribe wasted no time in taking advantage of the opportunity, relying on their ground game to pick up consistent yardage and first downs. Once inside the red-zone, senior running back Mikal Abdul-Saboor carried the ball on four consecutive plays, capping the drive with a high quality, against-the-grain cut at the goal line to put up the first points of the game.

“I think I naturally have good vision, but it’s also something that just comes from watching film,” Abdul-Saboor said to Tribe Athletics. “You can see how the linebackers flow, how the defensive line slants. It’s a combination of the two.”

It was clear that Abdul-Saboor was the focal point on offense for the Tribe, a trend that will likely continue throughout the year. The veteran tailback’s 103 rushing yards marked his sixth straight 100-yard effort going back to last season. After the game, coach Laycock expressed his satisfaction with the College’s rushing attack.

“I don’t think it’s what we’re doing, I think it’s who we’re doing it with,” Laycock said Tribe Athletics. “When you got running backs like Mikal and [junior running back Kendell Anderson] and you got our offensive linemen who are back in there, we should be able to establish the run and not be predicable.”

In addition to the consistent ground game, the Tribe managed to produce several big plays through the air. With the College leading 17-7 in the third quarter, junior quarterback Steve Cluley hit junior wide receiver Kevin Hart for a 58-yard touchdown. Hart beat his man and had the speed to outrun the safeties patrolling the middle of the field and went untouched into the end zone, giving the Tribe a three-possession lead. Cluley also had a 52-yard touchdown connection with senior wideout Christian Reeves in the first half.

“We had some matchups we felt like we could take advantage of, especially when we had some man coverage,” Laycock said to Tribe Athletics. “Our coaches did a really good job of isolating those and we had more that we didn’t connect on. Steve [Cluley] did a good job of putting us in the right place to take some shots.”

The special teams unit showed that they were on fine form as well, helping ensure victory for the Tribe. At the start of the fourth quarter Lafayette was looking to bring the game within reach, and Leopards kicker Jacob Bissel was set up for a 25-yard field goal. Several Tribe players managed to burst through the line and the kick was blocked by senior defensive tackle Tyler Claytor. Sophomore cornerback Denzel Dykes scooped up the ball and streaked down the sideline for a 55-yard return. Abdul-Saboor kept the momentum going two plays later, finding room to run before stiff-arming a defender on his way to the end zone for a 32-yard score.

Although the offensive fireworks were on full display, the defense did its best to make itself heard throughout the game. Freshman cornerback Raeshawn Smith picked up his first career interception late in the fourth quarter, undercutting his man in the end zone to preserve the Tribe’s second half shutout. Although Lafayette did manage 332 yards of total offense, the Tribe came up with big plays when it needed to time and time again.

“I thought the defense did a good job, the old bend but don’t break,” Laycock said to Tribe Athletics. “We gave up some yards, we got backed up a little bit, but we came up with some major turnovers.”

Following a bye week this coming weekend, William and Mary heads to Charlottesville, Va. to take on the Virginia Cavaliers Sept. 19th. Kickoff is scheduled for 3:30 p.m. and will be broadcast on ESPN3.

Correction: We mistakenly referred to Lafayette as the Panthers, but their nickname is the Leopards. It has since been fixed online and a correction will be issued in next week’s print edition.