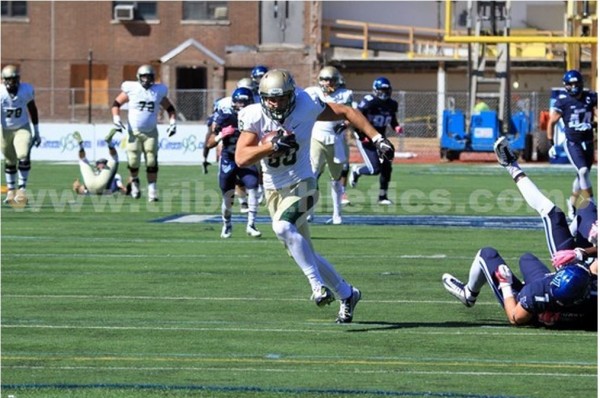 No. 16/14 Villanova faced two major difficulties entering Saturday’s contest against William and Mary. The Wildcats had to find a solution to contain junior running back Kendell Anderson on the defensive side of the ball while stitching together touchdown drives with a redshirt freshman quarterback under center.

Instead, Villanova solved neither problem, as the Wildcats  found themselves on the wrong side of a 94-yard pick-6, and the recipient of  a bruising 71-yard breakaway run to the endzone by Anderson as the Tribe rolled their Colonial Athletic Association opponent to the tune of 38-16 in Lancaster, Pa. The loss dropped the Wilcats to No. 24, tied with the Tribe in the Oct. 12 Coaches’ Poll.

“I thought we played a good game,” head coach Jimmye Laycock ‘70 said to Tribe Athletics. “I’m glad we didn’t fall in and make excuses about road trips… Our players went to work this week.”

The College received the opening kickoff, and cashed in a couple long completions from junior quarterback Steve Cluley to sophomore wide receiver DeVonte Dedmon for three points after the drive stalled out at the Wildcats’ 6-yard line. Sophomore kicker Nick Dorka, Jr. converted from 23 yards.

However, the third down stop  proved an unusual sight for an offensive unit that converted 8 of 16 third downs in Saturday’s game.

Villanova edged ahead of the Tribe on a double-reverse trick play pass in which Wildcats quarterback Zach Bednarczyk fired 33 yards down the field to the College’s 3-yard line. A few rushes later, and the Wildcats held a 7-3 lead. On the ensuing drive, Cluley fumbled as Villanova made a strip sack for a turnover on the William and Mary 11-yard line. Yet the Wildcat’s offense, still creaky under Bednarczyk with his first career start, only managed a field goal to establish a 10-3 advantage.

“All that crazy stuff, they caught us napping a bit,” Laycock said. “Then we started getting cranked offensively, started throwing the football pretty well.”

“All that crazy stuff, they caught us napping a bit,” Laycock said. “Then we started getting cranked offensively, started throwing the football pretty well.”

Prior to the game, Villanova ranked as the top-ranked pass defense in the CAA.  Cluley thought less highly of the Wildcats, methodically directing the offense on the ensuing drive with a 4 of 6 performance for 69 yards, including a tight throw splitting double coverage to junior wideout Kevin Hart for 35 yards. Cluley ended the day with an impressive 16 of 28 for 267 yards and a touchdown, marred only by the first quarter fumble.

“Steve did a nice job, he got a couple hits, but he runs our offense and he does a nice job,” Laycock said. “Our players believe in him.”

Anderson topped off the drive on a goaline counter run, tying the score at 10-10 just a few minutes into the second quarter.

The Tribe defense forced a three and out on Villanova’s next drive. Anderson, having rushed seven times for just 17 yards, lowered his shoulder through a hole up the middle and stiff-armed his way past the secondary on the first play from scrimmage, rushing 71 yards for the Tribe 17-10 lead with 10:49 left in the first half.

“Those big runs… yeah they tend to boost you up a little bit,” Laycock said.

Bednarcyzk started getting comfortable in the pocket on the next drive, leading the Wildcats to the Tribe’s 26-yard line. On 4th and 4, Bednarcyzk dropped back and fired into the deep middle of the field for his first interception of the day . Senior free safety DeAndre Houston-Carson jumped the route and raced down the sideline for 94 yards and the touchdown, the longest interception return in school history.

At 24-10, Villanova began to feel the heat as the Tribe continued to execute a near-perfect game. The next drive for the Wildcats ended as another three and out, the first of many as Villanova ended the day at a dismal 1 of 12 conversion rate.

The situation deteriorated further for the home team, as the highly-touted secondary forgot how to tackle, allowing senior receiver Christian Reeves to rumble in for a 53-yard touchdown reception. Villanova escaped into the locker room down 31-10 in a game with all the trademarks of a route.

The Tribe lost some offensive momentum entering the second half, as a drive to the Villanova 13 yielded a missed field goal, a rarity for the consistent Dorka. The third quarter closed with the score still 31-10.

With the start of the fourth quarter, Laycock prescribed more than the recommended dosage of Anderson up the middle, as the Villanova front collapsed under the repeated battering; a total of eight carries for 30 yards. Anderson finally broke the plane of the endzone with just under 14 minutes left of play. Down 38-10 with a broken offense, Villanova entered its death throes with yet another three and out.

All comeback hopes were crushed under the weight of the College rushing attack, chewing up eight minutes of the clock in the fourth. Villanova did manage another score with seven minutes left and failed a two-point conversion for the PAT, but a Tribe drive for five minutes erased the Wildcat’s hope as William and Mary prevailed 38-16 in the first upset of a nationally-ranked Football Championship Subdivison team since defeating No. 19/16 James Madison in 2013.

The Tribe racked up 466 yards of total offense to the Wildcats’ 310. Bednarcyzk’s second career start was a subpar one, as the freshman finished 13 of 31 for 166 yards and a pair of picks, the second one going to sophomore corner Denzel Dykes.

But even with the return of starting outside linebacker senior Zach Fetters,  the College’s rush defense inexplicably remains a problem, as the Tribe surrendered 146 yards on the ground, though pounding the Wildcats for 199 yards.

With the win the College improves to 2-1 in conference play and gained a national ranking of 24 in both the STATS pool and Coaches’ poll. Its scoring offense ranks third in the CAA while its scoring defense leads the conference.

Up next for the now-No. 24 Tribe is the beginning of three consecutive home games with a key CAA matchup against No. 19/20 New Hampshire at Zable Stadium in Williamsburg, Va. Kickoff is set for noon.