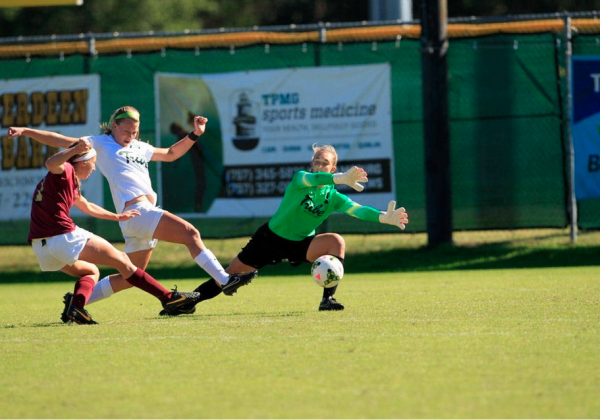 William and Mary (11-3-1, 5-1 CAA) was busy this weekend, racking up 2-0 wins in Colonial Athletic Association play against both Drexel (7-8, 1-5 CAA) and Delaware (7-7-2, 2-3-2 CAA). The two shutouts placed the Tribe in third place in the conference and secured the team’s NCAA record 35th consecutive winning season.

The College opened the match on the offensive as senior midfielder Nicole Baxter fired the first shot in the fifth minute, which was saved by Drexel goalkeeper Kelsie Fye. Seven minutes later the Tribe turned up the heat on the Dragons defense with four shot attempts in as many minutes taken by senior forwards Leci Irvin and Katie Johnston and sophomore midfielder Rachel Moore.

The Tribe played a ferocious defense throughout the match, with only three shots total allowed in the first period, only one on target, a save by senior goalkeeper Caroline Casey at 18:13.

The Tribe played a ferocious defense throughout the match, with only three shots total allowed in the first period, only one on target, a save by senior goalkeeper Caroline Casey at 18:13. The Dragons were only able to attempt two additional shots after halftime.

The first period closed out with three Fye blocks on shots from Irvin in the 28th minute, Baxter in the 36th and junior midfielder Haley Kavanaugh in the 41st. Entering the break, the match was scoreless.

After corner kicks by both teams to start the second half, the College took an alternative route to score at 54:43. Junior back Clara Logsdon, off of a Baxter pass into the box, fired a shot that, while initially saved by Drexel’s Fye,  ricocheted off of one unlucky defender’s back and bounced into the goal for the own goal, putting the Tribe at a 1-0 lead.

Over the following 25 minutes, six more shot attempts by the Tribe kept Drexel on the defensive. The only two shot attempts by Drexel in the second period were by Dragons forward Kylie Strong and both sailed high.

Despite the continuous effort by the Tribe to pound in shots until the end of the match, sophomore forward Sami Grasso broke through Drexel’s defense and effectively sealed the match at 79:45 with her fourth goal of the season, placed cleanly into the top left corner for the 2-0 advantage and the win.

The Tribe then improved its win streak to five with a shutout win over Delaware. The Blue Hens provided a real test, particularly in the first period. Delaware maintained relative possession for long stretches of the first period and kept the ball in close proximity to the Tribe goal with six corner kicks in the first 20 minutes, accompanied by two off-target shots. The Tribe only mustered two shot attempts in the first period. Only one was on target as Johnston’s shot was saved by Delaware goalkeeper Kailyn Rekos in the 25th minute.

Despite a slow start offensively, Casey stood strong on the defensive side, making two saves on shots by Delaware forward Nikki Adams at 25:40 and 40:28. Casey closed out the first period keeping the match.

The College returned to form offensively in the second period and did not look back. The first nine minutes were spent playing corner kicks by sophomore back Haley Kent with shots taken by Irvin, Baxter and Johnston. After a six-minute stretch where Delaware went on the offensive, the Tribe finally got on the board with a Johnston goal.

Johnston scored her sixth goal of the season at 67:49 from six yards away off of an assist from freshman midfielder Mackenzie Kober. Four minutes later, off of a pass from Baxter that set Kober up one-on-one with the goalie, in which Kober juked out Rekos and punched in the Tribe’s second goal from four yards out at 71:46.

A final save by Casey at 81:33 maintained the College’s fourth consecutive shutout and the Tribe’s victory, taking it to 5-1 in conference play.

The Tribe takes on its next conference opponent with a trip north to Towson, Md Friday. The match is scheduled to begin at 2 p.m.