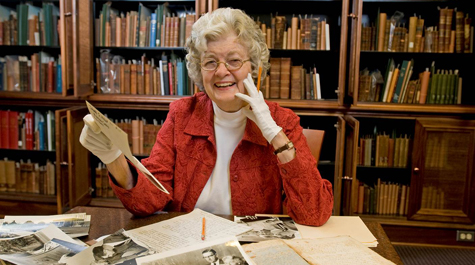 The larger portion, called the Robert Gilchrist Robb, Jr. Endowment after the donor’s brother, will support staffing and salaries for Swem employees, and the smaller endowment, named the Frances Randolph Howard Endowment after her mother, will fund the acquisition, processing and preservation of documents in the library’s Special Collections Research Center.

According to Swem Library’s Director of Development Kimberly Separ ’91, Robb had a specific vision for the donation, which she detailed in her will.

Robb, who passed away in 2013, had a long history with the College and the Williamsburg community. Part of a family with a history in the Tidewater region dating back to the 18th century, Robb’s father was a chemistry professor at the College and mended books in the library for Earl Gregg Swem. After working in the national office of the Phi Beta Kappa Society for several years, Robb returned to Williamsburg and became an active supporter of the College and Swem Library.

“She would walk over here to the library and you’d find her up on the second floor reading the newspapers in between volunteering for Special Collections,” Riggs said.

“Frances was a popular person and just a wonderful personality — kind and intelligent, just one of these people that was easy to talk to and always knew what was going on,” Manuscripts and Rare Books Librarian Susan Riggs said.

Robb was the first president of the Williamsburg Historic Records Association, which helps Swem Library collect Williamsburg historical documents. As a volunteer in Special Collections, Robb helped organize the records of Bruton Parish Church, digitize letters from Thomas Jefferson, catalog Virginia correspondences between the Civil War and the mid-twentieth century, and identify photographs of her own family. Robb also had a presence in the everyday life of the community.

“She would walk over here to the library and you’d find her up on the second floor reading the newspapers in between volunteering for Special Collections,” Riggs said. “Frances didn’t drive, but Frances could beat any of us to any new restaurants that opened in Williamsburg.”

During her lifetime, Robb donated several items to Special Collections, including a portrait by American painter Thomas Sully, a letter of recommendation from Thomas Jefferson to one of her ancestors, and family documents.

The gift from Robb provides a payout annually of approximately $8,000 to Special Collections and allows the staff to determine whether it will be allocated toward buying new items or preserving existing ones. The gift has already allowed the purchase of several documents, including correspondences from the Vietnam War, letters to and from families in Japanese internment camps during World War II, a facsimile of the Renaissance-period Voynich Manuscript, and works by the transgender poet Samuel Ace.

Private sources fund 30 percent of Swem’s budget. These donations allow the Library to fund collections, staff, and the building beyond the amount of money received from university support.

“For an institution the size of William & Mary, the the Special Collections is amazing for its wonderful rare and unique materials,” Director of Special Collections Gerald Gaidmore said. “There is [sic] not too many places where you can pull out letters written by four Presidents (Washington, Jefferson, Monroe, and Taylor) and the law notebooks of one of our greatest jurists, John Marshall, or show a first edition of the Book of Mormon and an annotated version of Isaac Newton’s Principia. We have such great materials because of people like Ms. Robb who have given us the capabilities to purchase important materials and not just rely on the donation of materials.”