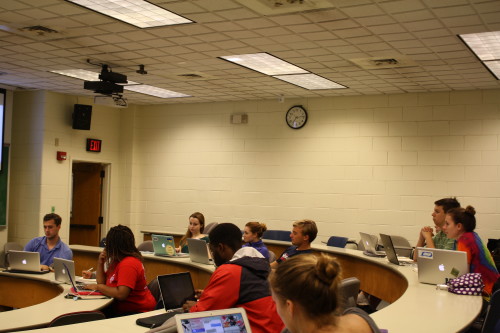 Prior to roll call at the meeting’s beginning, the senate moved into closed session.

“We originally only funded 500 of it because I could see some legwork from the organization that wants to have it,” Sen. Eboni Brown ’17 chair of the senate finance committee said. “We like to see them try to get funding from other sources instead of getting 100 percent of their funding from us. That’s something we talked about within finance guidelines this year.”

“This is an event that you’re going to hear me say something that I don’t normally say,” Sen. Danny O’Dea ’18 said. “For how expensive it is per head, I am 100 percent behind this event.”

Chairman of the Senate Dan Ackerman ’16 recommended funding another $500 for Tribe Tank because the organization does not have its own funds and will not be charging for the event.

The second activities and events request the senate heard was for A Conversation Continued, an event to be held by the on-campus organization Free the Children, which was created last semester. FTC President Chi Chola ’18 said the event would feature mental health activist and comedian Kevin Breel, whose TED talk about his personal struggle with depression has more than two million views. Chola originally requested $4,900 but amended the request to $3,000.

Senators expressed their support for funding the event.

The senate approved fully funding the request by acclimation.

Chola is also working on a series of PSA videos about mental health in collaboration with class of 2017 President Katherine Ambrose.

Ambrose introduced the unofficial Tribe Turkey Drive Event Act, which plans to partner the SA with other campus organizations and Sodexo, USA to create Thanksgiving turkey gift baskets for families in need in the Williamsburg area. A partnership with Sodexo would allow students to donate meal swipes, whose funds Sodexo would provide to the SA. Ambrose has not yet confirmed Sodexo’s involvement with the event, but the company has approved other meal swipe donation programs in the past. The SA would create the baskets and deliver them to families whose names were provided to them by Campus Kitchens, but are not serviced weekly by Campus Kitchens.

Ambrose said she is reaching out to a variety of campus organizations for partnerships for the turkey drive.

“Tribe Fellowship would also like to do something with canned food,” Ambrose said. “They also have a lot of manpower, because they’re a really big organization on campus. But it doesn’t just have to be a Christian kind of focus, we could do all different kinds of campus ministries and try to make it as big as possible.”

The bill was assigned to the finance, student life, outreach, policy and public affairs committees.

Class of 2016 President Mark Bland ’16 announced at the end of the meeting that the votes for Homecoming Court have been counted and the winners have been decided.