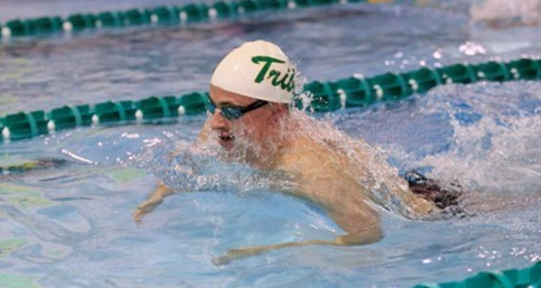 William and Mary faced off against multiple Colonial Athletic Association opponents in the two-day Pod Meet held Oct. 31 and Nov. 1 at Delaware. The women’s team faced James Madison, Delaware and North Carolina — Wilmington and closed out the weekend with losses to the first two and a win against the latter, moving to 2-2 in CAA competition and 3-2 overall. On the men’s side, the College dominated Delaware and UNC – Wilmington, improving to 3-0 in CAA competition this season and 4-0 overall.

The women swam their way to victories in 18 of 33 matchups Saturday. Their wins featured the strong individual performances of freshman Morgan Smith in the 1650-yard free in a time of 17:30.86 and senior Jessie Ustjanauskas in the 100-yard fly in 56.69 seconds.

The College continued its streak of remaining undefeated in the 200-yard medley relay, as the team of Ustjanauskas, junior Jaimie Miller, sophomore Annie Valls and freshman Katie Sell won with a time of 1:44.74.

On Sunday the College’s top swimmers remained consistent in their respective events. Junior Sophie Rittenhouse remains undefeated this season in the 200-yard back after a first-place finish at 2:02.32. Ustjanauskas notched her second individual victory in the 200-yard fly with a time of 2:06.68.

However the depth the Tribe displayed Saturday could not match the consistent output of James Madison and was not enough to edge out a team victory over Delaware. While the Tribe did gain a win of 237-110 over UNC – Wilmington, both James Madison (202-145) and Delaware (181.5-165.5) handed out losses.

On the men’s side, William and Mary’s opponents’ efforts were drowned out both days. William and Mary asserted itself Saturday by winning 21 of 22 races. These victories include the 200-yard free relay, with two separate William and Mary teams finishing first and second. The team of junior Joeh Eiden, senior Billy Russell, sophomore Kyle Neri and senior Will Manion finished in first place with a time of 1:24.22. The men also won the 200-yard medley relay with the team of Manion, senior Justin Barden, senior Andrew Nyce and Eiden with a time of 1:32.63. Finishing the relay sweep, William and Mary also took the 400-yard medley relay with the combined efforts of Barden, senior Jeremiah O’Donnell, Manion and Russell in 3:20.63, a new meet record.

The Tribe swam well against its conference opponents and won 237-104 against Delaware and 249-98 against UNC – Wilmington.

William & Mary travels to Durham, N.C. Nov. 7 to compete in a tri-meet against Old Dominion and No. 19 Duke. The meet begins at 1 p.m.