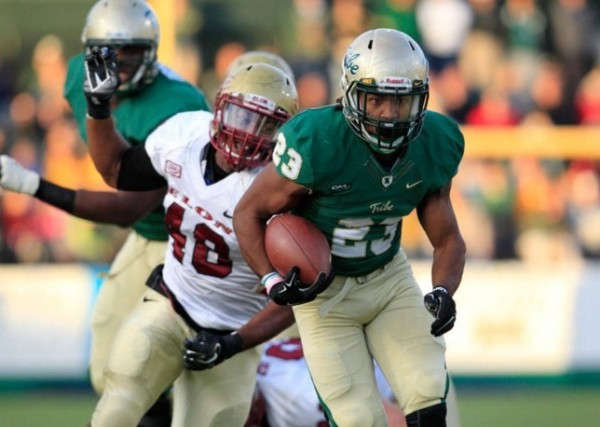 As No. 12 William and Mary travels down to Elon this weekend, one can only hope that the punt return unit remembers how to function after the dead-heat sprint of a scoring game against James Madison, as the Tribe will be facing the statistically-worst offensive unit in the Colonial Athletic Association, the Phoenix, in the College’s first-ever visit to Rhodes Stadium.

It should be a nice reprieve for the occasionally maligned Tribe run defense, a unit that began the season with high hopes, yet has demonstrated middling ability to force teams into a one-dimensional passing offense. The College (6-2, 4-1 CAA) currently stands at No. 9 in the CAA in stopping the run, surrendering an average of 142.9 yards per game. After watching the JMU game, fans may be inclined to wonder why that number isn’t higher. Despite the huge plays made by a Tribe defensive end — junior defensive end Peyton Gryder recovered two fumbles — the College still got burnt regularly on the outside as it failed to contain a running quarterback or any tailback James Madison threw into the game. The center of the defense wasn’t particularly solid either as the Dukes put up 233 yards on the ground.

This week should not look anything like that performance. Elon (3-5, 2-3 CAA) operates with a committee of running backs, as not a single player has even eclipsed 200 yards for the 2015 season. Either all five running backs are equally talented, or the Phoenix have a gaping hole at tailback. My guess is the latter. Five backs have 30 or more carries, four have a single touchdown and all of them have contributed to the No. 12 (of 12) running game in the CAA, producing a mere 78.8 yards on the ground per game.

Elon also suffers from a defensive deficiency in stopping the ground-and-pound game, allowing an average of 225 yards per game for a total of 1,804 on the 2015 season to go along with 18 rushing touchdowns. To put that in perspective, the Tribe’s No. 6 rush defense unit has allowed 1,143 yards and just 9 touchdowns while playing through myriad challenges — three nationally-ranked teams, the No. 1 offense in the CAA (JMU), and a close game at Football Bowl Subdivision Virginia. Elon’s schedule includes North Carolina A and T, a 41-3 loss to FBS team Wake Forest and a triple-OT win against less-than-fearsome powerhouse Garner-Webb.

The Tribe’s No. 6 rush defense unit has allowed 1,143 yards and just 9 touchdowns while playing through myriad challenges — three nationally-ranked teams, the No. 1 offense in the CAA (JMU), and a close game at Football Bowl Subdivision Virginia.

However, the Phoenix have already played Richmond and James Madison, which hurts the defensive standings, and while no one is saying the defense is good, it might not be unwatchable. The Phoenix have three senior starters on the secondary and three on the defensive line to make for an experienced unit.

Junior quarterback Steve Cluley should be very bored by the final whistle, as Laycock will call the run early and often, likely working the Tribe’s sophomore third-string running back Jonathan Dunn into the rotation by the third quarter. Expect junior running back Kendell Anderson and senior running back Mikal Abdul-Saboor to hit around 30 carries apiece.

However, Elon has some interesting credentials. The Phoenix lost 51-0 at home against James Madison, but recovered last week and defeated Stony Brook 21-7 after a bye week between the games. The Richmond loss looked respectable at 27-14. Although occasionally overwhelmed and outmatched, the Phoenix certainly look to be a scrappy team when the opposing offenses make big mistakes. Elon picked off Stony Brook’s quarterback four times in the Phoenix’s win. Elon’s air coverage is more successful, as it has the No. 4 passing defense in the CAA, although the weaknesses against the run still pull the entire unit down to No. 10 in the conference in total defense.

Simply put, Elon doesn’t do anything that the Tribe doesn’t do better. The College holds an advantage in turnover margin, scoring offense and scoring defense, total offensive yards, total defensive yards, and it should be a total mismatch. Elon does have the home-field advantage, and a Tribe meltdown a la Delaware is not inconceivable, but unlikely. The Tribe has performed pretty well on the road apart from the Delaware game, competing at U.Va. with no turnovers and dispatching a nationally-ranked Villanova squad. It’s also possible that the Tribe may be overconfident entering the game after the huge James Madison game.

The College finally has control over its own fate in entering the playoffs, and winning two of the next three would essentially guarantee the Tribe a Football Championship Subdivision playoff berth, the first since 2010.

But the College finally has control over its own fate in entering the playoffs, and winning two of the next three would essentially guarantee the Tribe a Football Championship Subdivision playoff berth, the first since 2010. Just Towson and Richmond remain after this week, and both are tough matchups. Laycock simply won’t allow the 2015 season to derail against the CAA team that scores the fewest points in the conference right after defeating the No. 1 offense in the conference. The game is just too important, and the playoffs are just too close for Elon to be overlooked. Expect the Tribe to run ragged all over the Elon on Saturday in a 35-10 thrashing with 300 yards on the ground for the College.

Kickoff is set for noon Saturday. The game will be broadcast live regionally on Comcast SportsNet.