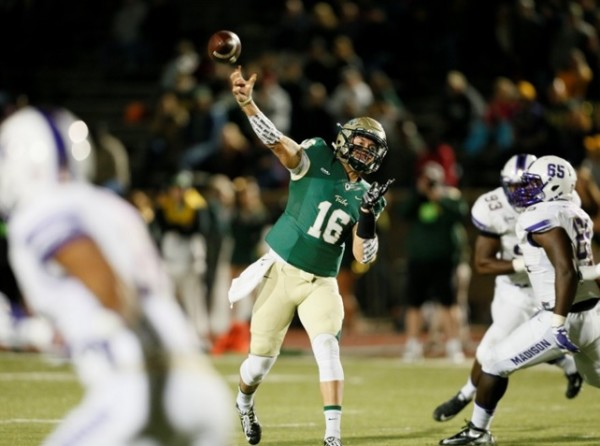 Just two years ago, Towson head coach Rob Ambrose guided his Tigers all the way through the playoffs to the Football Championship Subdivision final against North Dakota State. Though the outstanding season crashed and burned in a 35-7 blowout loss, Ambrose’s campaign was judged a success on all sides, as the 13-3 final record was the best ending record in Towson history. Towson rolled to the championship finals on the late-season surge, winning four of their last five to slip into the FCS playoffs. In 2015, Ambrose looks to repeat the act.

Though the 2015 campaign began on a rough note for Towson, Ambrose and the Tigers are riding high into Williamsburg, Va., for this weekend’s matchup against No. 7 William and Mary, boasting a four-game winning streak, votes for a top 25 rank, and a revitalized defense that has surged to No. 3 in the Colonial Athletic Association in total defense.

The Tribe however, while still adding to the win column for five straight weeks, has struggled significantly on the defensive side of the ball, giving up 389 yards to the CAA’s worst offense at Elon last week. The Phoenix shredded the College secondary for 315 yards.

While the defensive unit, led by stand-out senior free safety DeAndre Houston-Carson, has played well at times, the outstanding individual performances have not translated into outstanding team defense consistently. While the Tribe held New Hampshire under 300 yards of total offense, James Madison cranked out 460 yards against the College at Zable Stadium. Certainly individual plays — senior linebacker Zach Fetters’ tip-toe interception on the sideline or senior middle linebacker Luke Rhodes forcing a fumble by chasing down a receiver last week for example — turn the tide of games, but it is concerning that a defense with that kind of individual talent still only finishes in the upper-middle of CAA defenses in terms of total yardage. Currently William and Mary stands at No. 4 in total defense.

The Tigers offer a balanced attack, No. 6 in the conference on the ground averaging 158.1 per game and No. 4 through the air with 190.8 on average. While not inherently spectacular, the rushing attack in particular has shown signs of improvement over the past few weeks, as Towson has boasted a 100-yard rusher for two consecutive weeks. Towson won’t win a shoot-out with the Tribe, but the Tigers did manage to put 28 points up against the No. 1 scoring defense in the CAA in Towson’s 28-21 victory over Villanova Oct. 24.

The difference in the game will come down to one of the most-cited stats in major football games, the one that is essentially a cliché- the turnover battle.

However, the difference in the game will come down to one of the most-cited stats in major football games, the one that is essentially a cliché- the turnover battle. Towson slipped by then-No. 22 Villanova on the strength of two of pick-6’s against a freshman quarterback. This week they will have no such luxury, as the Tribe has experience under center with junior quarterback Steve Cluley. Cluley has only a pair of interceptions on the season. Towson holds no advantages in the other turnover category either, as Towson fumbled away a loss to Elon earlier in the season, dropping the ball five times and failing to recover three of those. The College has only three lost-fumbles to blemish its record, whereas Towson has given away seven. The Tribe overall boasts a conference-leading plus-12 turnover margin, while the Tigers sit in a three-way tie for No. 7 spot with a minus-two margin.

The College also holds an advantage at the the quarterback spot. In his second season at the helm of the College offense, Cluley has had a remarkably efficient season, throwing 11 touchdowns to just two picks with a 62 percent completion rate. Cluley will likely break 2,000 yards passing on the season this weekend as well. Towson’s Connor Frazier has seven touchdowns and seven picks, and though his 60 percent completion rate  is solid, his decision-making on throws is average at best.

Cluley’s development as a quarterback has been the quiet storyline all season, as the dominance of the dual running back threat — junior Kendell Anderson and senior Mikal Abdul-Saboor — has taken much of the spotlight. The tailback pair has moved the Tribe to the No. 3 rushing attack in the CAA. This rush-first approach has allowed the play action game to flourish, as Cluley now commands the No. 3 passing offense in the conference as well.

The Tigers’ 2013 playoff berth was at the expense of the Tribe’s, as Towson upset William and Mary in the final home game of the season at Zable Stadium. This year, the circumstances are eerily similar.

Towson is no pushover, and hasn’t been in recent years. The Tigers’ 2013 playoff berth was at the expense of the Tribe’s, as Towson upset William and Mary in the final home game of the season at Zable Stadium. This year, the circumstances are eerily similar. Head coach Jimmye Laycock ’70 has steered his team well thus far, but the College has to stay focused against Ambrose’s Tigers if they plan to avoid the meltdown from two seasons ago. Yet the Tribe knows how to protect the ball and keep possession, and in a defensive showdown like this weekend’s game, nothing is more important than holding onto to those precious few possessions and giving their own defense a rest. In today’s game, a battle between first and second place in the CAA, it’s going to be a grind, it’s going to be physical, but if the Tribe can avoid turnovers and work into the play action game, the College should prevail and seal the perfect record at home for 2015.

Prediction: College muscles over a tired Towson defense in the fourth quarter for the 10-point advantage, final score William and Mary 24, Towson 14.