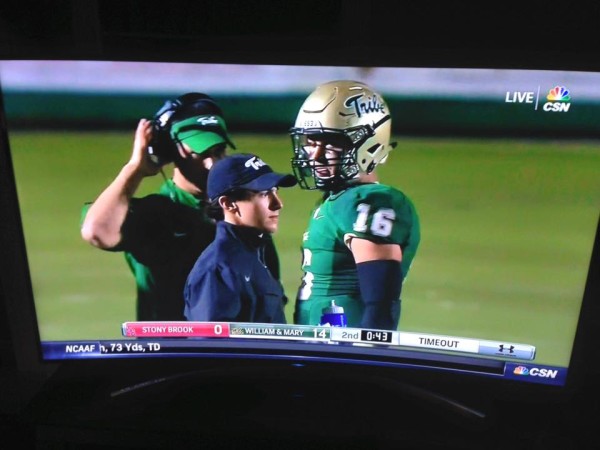 Conventional wisdom says that guards and offensive tackles are the most under-appreciated positions in football. The big guys blocking other 280-300 pound men so the running backs and quarterbacks can look good certainly don’t get enough credit. However, there’s a component of the football program that gets even less time in the spotlight, and make everyone, including the offensive line, look good. And that’s the equipment managers.

When he’s not having his heart broken by his beloved Buffalo Bills and Sabres, Kyle Chadwick ’17 can usually be found preparing for game day at the Tribe’s facilities, patrolling the sidelines alongside head coach Jimmye Laycock ’70 during game day, getting the team neat and organized for another week of practice, or typing away late at night providing his own insight and analysis on Tribe sports on his own William and Mary Sports Blog. Chadwick is the green and gold-standard of William and Mary fans, taking the trip to the Colonial Athletic Association championship basketball tournament in Baltimore, and checking out the 2014 season-opener in Blacksburg, Va. After celebrating the NC State victory last week, I had a chance to talk with Chadwick about his job as a Tribe football equipment manager. Chadwick described how he got involved as an equipment manager.

Chadwick worked as a marketing intern for Tribe Athletics during his sophomore year, but he had aspirations to work for the football. During the spring 2015 semester he saw an opening for the equipment manager position.

“At this point, I would have done just about anything to be a part of the team, even for free,” Chadwick said. “I jumped on the opportunity, applied, and thankfully got the job … It might not be the most glamorous job, but I know I am directly impacting the team and meeting some amazing people along the way.”

Chadwick explained what an average day looks like as an equipment manager. Since he works most of the week and goes to most of the games, his busy schedule occupies most of his afternoons during the season.

“You work 5-6 days of the week, and have Sunday off,” Chadwick said. “You travel with the team to the majority of the games, [you have to be] there for all home games. A typical day starts at about 2:30 p.m., where we are in charge of setting up the field and the equipment for practice. Practice is usually at 4 p.m., and during practice we help run the drills and help the coaches in any way needed. Typically, we’re done each day by 6:30, so it is about four hours each day. On game days, we have to get to the stadium about six hours before the game, to set up coach com — the coaches headsets — the field, the locker room, and anything else that is needed. On game days we usually work around 10 hours, but it goes by pretty quickly.”

Chadwick said the job is everything he expected despite some long, tedious days. He also said one of the biggest unexpected perks of the position was new friendships.

While certainly tough to balance this job with academics, I wouldn’t trade the experience for anything in the world.”

“Seeing everybody day in and day out, it is absolutely essential to get along and have a good team,” Chadwick. “That is exactly what we have, and I am so happy to have made life long friends along the way. While certainly tough to balance this job with academics, I wouldn’t trade the experience for anything in the world.”

While on the sidelines, Chadwick holds many roles, including game manager, water boy, as well as offensive and defensive bench aid.

“The game manager is there to help put out the kicking tee, and to help with any equipment related duties, like if a player had his helmet pop off,” Chadwick said. “The offensive and defensive bench managers do much of the same, and provide water and perform equipment duties to the offense and defense, respectively … While the tasks are menial, it is exciting to be in the thick of things on the sideline during big plays and doing victory.”

Though sideline traditions in game preparation sometimes boarder on the superstitious side in football, Chadwick hasn’t seen any Tribe equivalent of the Virginia Tech lunch pail or Bible verse eye black.

“While I can’t attest to any superstitions of players or coaches, our equipment staff certainly has a few,” Chadwick said. “Before every game, just before the team warms up, we all get together and down [Mountain Dew] Kick-Starts. There is a particular flavor that each person gets, and you can’t argue with the results, as we [were] currently on a six-game winning streak. On top of that, we all have certain players whose locker we set up before every game. Since I work with the quarterbacks, I make it a priority to set up their lockers pregame.”

Though Chadwick has seen every game this season in his role as equipment manager, his favorite game and favorite play of the season were both from the College’s biggest win of 2015. The go-ahead score of the James Madison win should sound familiar to Tribe fans.

“My favorite play was when Kendell Anderson rushed it in from about three yards out to cap a game-winning touchdown drive with under a minute to go,” Chadwick said. “JMU was a top 10 team at the time, and that win propelled us into the top 10 rankings and solidified our status as elite in the CAA and all of FCS.”

“Coach Laycock is an imposing, revered figure,” Chadwick said. “Words can’t describe how much he has done for the program. At a ground level, you see all of the hard work he puts into preparing week in and week out for a dogfight in the CAA. He is always lurking on both the offensive and defensive side of the ball during practice, and is there to make corrections. On top of being a loyal and great coach, he truly cares about his players and coaches, who are always determined to play for such a legend. I hope he continues to coach at William and Mary for a long time to come, and if this year is any indication, Tribe football doesn’t seem to be slowing down any time soon.”

“I hope he continues to coach at William and Mary for a long time to come, and if this year is any indication, Tribe football doesn’t seem to be slowing down any time soon.”

In addition to working as an equipment manager, Chadwick and his brother Davey Chadwick ’15 run the William and Mary Sports Blog.

“My brother and I have always been huge proponents of all things Tribe sports, but particularly football and basketball, Chadwick said. We knew that our alumni were very passionate about the game, much like we were, and we wanted to give back to them.”

“The feedback has been amazing,” Chadwick said. “So many amazing alumni reach out to us and tell us time and again that they enjoy our articles and to keep it up. There is nothing better than hearing people tell me they read our blog to get information about the upcoming games. It seems as though we are getting new followers every day, whether it be on Facebook or Twitter. It is an exciting time to be a Tribe sports fan, and we are reaping the benefits of that.”

Chadwick is current enrolled in the Mason School of Business and says he will likely do something corresponding with his degree, rather than sports reporting, but says he will always be a Tribe fan and will continue the blog after graduation.

“While I am not interested in sports writing as a future, my passion for William and Mary sports will not die. Even after I graduate, I plan on watching all of the football and basketball games (at the very least) and keep myself updated on all things Tribe Sports. My brother and I have decided to continue the blog after college, and are excited to see where it goes from here.”