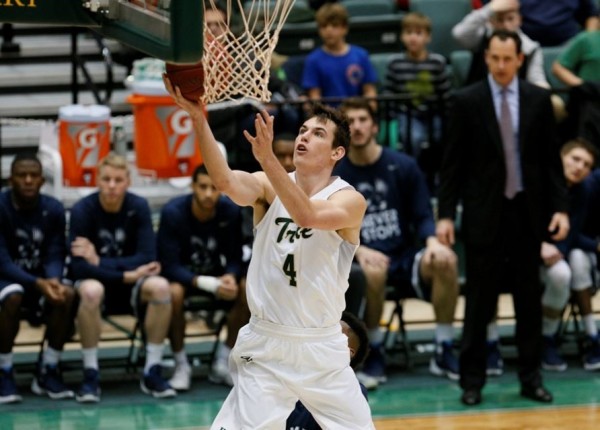 William and Mary (8-3) fought off a late charge from Central Michigan (6-6) to close out their non-conference slate with a home victory Dec. 29, defeating the Chippewas 88-84. The Tribe put in a strong team performance, with five players scoring in double figures to seal the team’s sixth win of the season in Kaplan Arena. Junior guard Omar Prewitt led the way with 23 points on 6 of 12 shooting.

The Tribe got off to a hot start, opening up a 15-9 lead on a three-pointer by sophomore guard Connor Burchfield. However, William and Mary slowly saw their lead slip away over the course of the first half. By halftime, they trailed 33-31. After the game, Prewitt pointed out that the Tribe went into halftime knowing that they were not playing well enough to win.

“They really push it in transition; Coach expressed that to us the entire time,” Prewitt told Tribe Athletics. “We didn’t get it done in the first half.”

As a result of halftime adjustments, William and Mary exploded after the intermission, with Prewitt dishing to senior forward Sean Sheldon, who finished a spinning layup to tie the game on the College’s very first possession of the second frame. Sophomore guard David Cohn picked the pocket of Central Michigan’s Rayshawn Simmons and pushed it ahead to senior guard Terry Tarpey. Tarpey slammed it home to give the Tribe the lead, turning the momentum of the game.

Down the stretch, the College was buoyed by their bench depth. In particular, coach Tony Shaver singled out Burchfield and sophomore guard Greg Malinowski after the game.

Those are two pretty good players that we’re not starting right now, and we’re having trouble getting them enough minutes, because to play them, you need to take Daniel Dixon or Omar Prewitt or someone like that out of the lineup

“Our guys did a really nice job of getting [Burchfield] the ball tonight,” Shaver said to Tribe Athletics.

Burchfield shot 4 of 6 from downtown, including a crucial five-point run that gave William and Mary the lead for good with seven minutes to play.

“It’s hard,” Shaver said to Tribe Athletics. “Those are two pretty good players that we’re not starting right now, and we’re having trouble getting them enough minutes, because to play them, you need to take Daniel Dixon or Omar Prewitt or someone like that out of the lineup.”

Shaver pointed out that Prewitt has played minutes at point guard in recent games to allow guards like Malinowski and Burchfield to play more.

The Tribe has struggled with being unable to fit all its talent on the court at a single time, but this has hardly been a weakness for the College.  On Tuesday night, the Tribe broke the game open with 26 points off of the bench, with the sophomore duo of Malinowski and Burchfield combining for 24 of those points.

On the other end, a strong defensive performance stifled the usually hot-shooting Chippewas. Central Michigan, which ranks No.5 nationally in 3-pointers made per game (11) did make 12 threes, but shot only 32.4 percent from behind the arc. The Tribe laid down six blocks and were able to convert 7 CMU turnovers into 13 points. Star player Chris Fowler, recently returned from an injury, put up 21 points but missed both of his shots in the last minute with Central Michigan chasing the lead.

The star of the show was undeniably Prewitt. The junior not only knocked down 23 points, but also dealt 4 assists and collected 8 rebounds, a robust stat-line. Perhaps the most noteworthy moment could have occurred more dramatically; Prewitt sank two second-half free throws to reach 1,000 career points for the Tribe, though free throws as scoring benchmarks may be a trend for the College. In a similarly modest fashion, Marcus Thornton ’15 broke the school scoring record on a pair of free throws last season. Prewitt is the 38th player to do so for William and Mary.

After the game, Prewitt was characteristically understated.

“I know not too many people do that [reach 1,000 points]” Prewitt told Tribe Athletics. “As long as our team wins, that’s the biggest thing for me.”

“What a stat line … great night [for Prewitt]” Shaver said to Tribe Athletics.

Prewitt’s performance was a model of consistency; the junior guard has hit double figures in all ten games of the season.The Tribe has two days of rest before gearing up to play Colonial Athletic Association member Towson (9-4) in Williamsburg. The game also marks the beginning of CAA play for the Tigers.

Shaver decribed Towson  in the CMU postgame interview with Tribe Athletics as a “big, strong, physical team who’s going to beat the heck out of us inside.”

The back-to-back games along with the opening of the conference schedule will test the Tribe’s toughness. Tipoff is set for Dec.29 at 1 p.m. in Kaplan Arena.