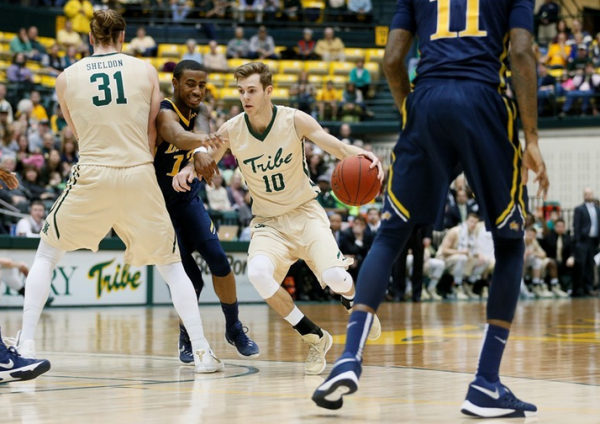 A lack of consistency has defined William and Mary’s regular season. A season-opening thumping of North Carolina State and quality wins over strong opponents like High Point, Central Michigan and North Carolina-Wilmington are negated by losses to lowly Howard and Drexel and terrible performances at Towson and Hofstra. That lack of consistency was on full display Saturday against James Madison, as the College failed to capitalize on several opportunities en route to a 71-65 loss to close out regular season play.

With the loss, the College (19-10, 11-7 CAA) fell to the No. 5 spot in the Colonial Athletic Association standings, and will face the fourth seeded Dukes (21-10, 11-7) again next Saturday in Baltimore in the conference tournament.

“Disappointed in our team today,” head coach Tony Shaver told Tribe Athletics. “We’ve reached a point where we expect to win these games, and we didn’t play well enough to win today … I told the players our effort’s good, our desire’s there, guys really want to be good, but our execution has really slipped lately, and we have to correct that before next week. We’ve got a team full of guys making the wrong decision a lot of times right now, and we have to correct that.”

The game opened with a promising start, the Tribe jumping out to a 15-6 lead after just four minutes of play. The College went ice cold, however, scoring just 15 more points in the rest of the half. JMU took advantage, utilizing 11 points off of five William and Mary turnovers in the period to take a 36-30 lead into halftime.

“Disappointed in our team today,” head coach Tony Shaver told Tribe Athletics. “We’ve reached a point where we expect to win these games, and we didn’t play well enough to win today

The Tribe struggled to find the finishing touches on the offensive end for much of the game, shooting just over 38 percent from the field. The poor shooting from beyond the arc was particularly troubling, as the three-point shot has proven to be this team’s bread and butter this season. The College connected on only four of their 24 attempts from three-point range, including a 0 for 10 mark in the second half.

The Tribe’s poor shooting numbers were exacerbated by the Dukes’ 17 turnovers. William and Mary’s defense created plenty of chances for easy baskets on the other end, but in the end the College’s many takeaways resulted in only 14 points. In contrast, JMU forced eight turnovers, which turned into 15 points.

“I think it was just more of us today,” Prewitt told Tribe Athletics. “[Senior forward] Sean [Sheldon] was really hot, and I thought we didn’t do a good enough job getting him the ball as guards, myself included. We got very selfish towards the end of that ballgame.”

The second half became a back-and-forth affair, the College staying within one or two possessions until the final buzzer. The Tribe could have had a chance to win if not for the play of JMU point guard Ron Curry, a senior playing in his final game in Harrisonburg. Curry poured in 16 of his game-high 21 points in the second half, scoring inside, outside and from the charity stripe.

Despite struggling to keep possession, when Curry and the Dukes did get shots, they capitalized on the opportunity. JMU fired exactly 50 percent from the field. The three-point shot was kinder to them than to the Tribe, as the Dukes buried nine threes in addition to outrebounding the College 38-30. In the end JMU triumphed 71-65, the Tribe limping into the tournament having lost two of their last three games.

“This has been a great team. This team has won 19 ballgames in the regular season,” Shaver told Tribe Athletics. “This team has done a lot of great things, and we won’t forget that, but we’ve always prided ourselves on playing well late in the season, and we’ve got to get back to that over the next seven days.”

William and Mary will face off against JMU Saturday at the Royal Farms Arena in Baltimore, MD in the CAA Tournament quarterfinals. Tip-off is scheduled for 2:30 p.m.