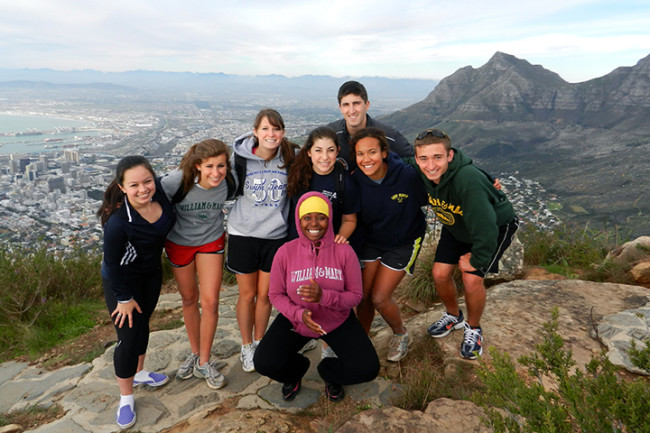 Beginning with its founding in 1693, the College of William and Mary has been an international university. This year, the College was selected as one of four institutions to win the 2016 Senator Paul Simon Award for Comprehensive Internationalization. This award, given by NAFSA Association of International Educators, recognizes colleges and universities that promote global education experiences.

2016 represents a milestone year for several key aspects of the College’s internationalization efforts, including being recognized for the third consecutive year as the number one public university for undergraduate study abroad experience in the U.S., with more than 750 undergraduate students studying abroad each year in over 50 countries. The College also has three times as many international students and scholars as it did 10 years ago, and the COLL curriculum launched this year includes a COLL 300 requirement for coursework that engages students in global and cross-cultural perspectives.

One reason the College has seen this progress is due to the administration’s commitment to internationalization, including the creation of the vice provost for international affairs position, who reports to Provost Michael Halleran and chairs the International Advisory Committee. The IAC includes representatives from the College’s five academic schools: the Faculty of Arts and Sciences, the Mason School of Business, the School of Education, the Marshall-Wythe School of Law and the Virginia Institute of Marine Science.

An undergraduate student representative on the IAC, Jingyi Zhang ’17 says this recognition is a result of the College’s ability to excel in fusing its centuries-old traditions with the contemporary needs of a globalized world.

“Winning the Simon Award is an important and celebratory milestone for the University,” Zhang said in an email.  “It demonstrates the hard work the school has put in international enrichment and the success it has achieved thus far.”

Winning the Simon Award is an important and celebratory milestone for the University,” Zhang said in an email.

Vice Provost for International Affairs Stephen Hanson cited three main strengths when it comes to internationalization at the College: its size, location, and history. He said that the College’s size is ideal for allowing for a sufficient number of globally minded initiatives, without being so big that it becomes difficult to coordinate efforts between academic schools. Furthermore, a smaller size provides a more welcoming environment for international students and scholars. Additionally, Hanson said that he sees the College’s short distance to Washington, D.C. as a strength. Finally, according to Hanson, the College’s history and tradition play a pivotal role.

“It matters overseas when you say you’re the second oldest university in the U.S., and the place that four presidents got their education,” Hanson said. “It has a resonance.”

Professor Pamela Eddy, one of the founding members of the IAC, similarly cited the College’s curriculum as an advantage.

“I think we build on a strong liberal arts tradition, which really has a value for understanding other cultures and countries,” Eddy said.

I think we build on a strong liberal arts tradition, which really has a value for understanding other cultures and countries,” Eddy said.

This recognition with the Simon Award can help the College in a number of ways, from attracting a greater number of students and scholars interested in international issues, to drawing in increased donor support.

“I think that heightened attention on us can…increase these opportunities we could have to partner, or to also attract students and faculty that are interested in international issues to our campus,” Eddy said. “It can put William and Mary on the radar for others.”

In addition to giving students at the College a more global education, the administration is also eager to increase recognition of the the College’s name at an international level. Both Hanson and Eddy cited lack of funding as an obstacle for continuing to pursue internationalization initiatives. The College’s internationalization plan aims to reach 60 percent study abroad participation at the undergraduate level by 2018, and financing this effort can pose a challenge.

According to Hanson, the hope is that the Simon Award will continue to move these internationalization efforts forward.

“We certainly think it’s a great bragging point; we are tweeting it and retweeting it as much as we can,” Hanson said. “It is impressive, and it’s the culmination of a lot of hard work, by faculty, by students, by staff and by administration.”