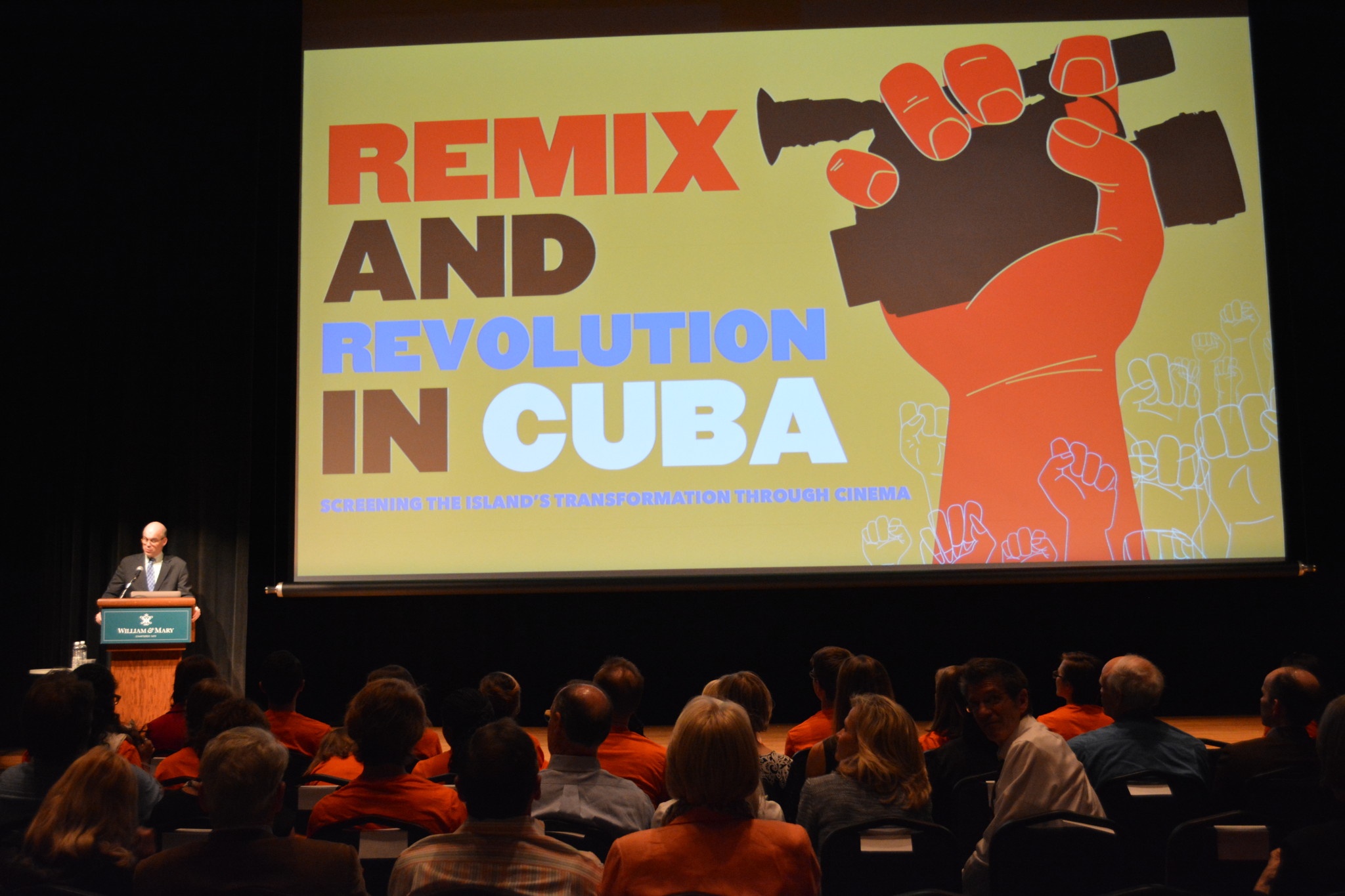 Cigars, old cars and colorful cocktails — during her lecture March 31, Ann Marie Stock, professor of Hispanic studies and film and media studies at the College of William and Mary, named these three stereotypes as the images that first come to mind when Americans think of Cuba. The talk, “Remix and Revolution in Cuba: Screening the Island’s Transformation through Cinema,” was part of the Tack Faculty lecture series.

The island country, only 90 miles off the coast of Florida, remains a mystery to the majority of Americans, but not to Professor Stock who, over the course of three decades, has visited Cuba more than 60 times. The lecture thus began with Stock calling out the stereotypical images of Cuba held by many Americans, which she attributed to the lingering isolation between the two countries.

“So when we think of Cuba,” Stock said, “we think of two-dimensional characters in predictable plots. We think of bombshells, often with maracas. Or we think of bearded revolutionaries.”

The stereotypes, Stock said, persist through the majority of U.S. citizens viewing Cuba as an island stuck in time.

According to Stock, one aspect of Cuban culture that gets overlooked is cinema. Revolutionary cinema in Cuba dates to 1959 with the establishment of a film institute under the new government of Fidel Castro. The Instituto Cubano del Arte e Industria Cinematográficos was implemented as a tool for mass communication and education.

Cinema was chosen from the beginning of the Cuban Revolution to be the mode through which revolutionary ideals and fervor would be spread.

“I remember that during those years, I went to the cinema not to see films but to become Cuban,” Stock said, quoting Cuban writer Senal Paz.

Through Cuban movies, the rights of citizenship were defined, as well as the basic revolutionary beliefs held by Castro’s dictatorial government.

Parallel to the institutional efforts to continue Cuban cinema is the story of struggling Cuban filmmakers during the years under the Castro regime. Stock explained that the evidence of their success lies in the quality and quantity of their experimental output from the early years of the revolution.

“Cuban films — and here I’m speaking of all kinds of films: newsreels, documentaries, animations, feature films; they captured the turbulent 1960’s on the island and around the world,” Stock said.

The subjects of the films produced during this year ranged from literacy achievements in Cuba to the race riots occurring in the United States.

Cuba’s film industry served as a model to other regions to develop a flourishing film tradition. The industry also kick-started the New Latin American cinema movement, as well as the third cinema movement, in which films aspired to be socially realistic in portraying life and emphasizing issues including poverty, national identity, tyranny, revolution and colonialism. The International Festival of New Latin American cinema, held annually in Havana, has been and continues to be a major center for film.

Cuban films — and here I’m speaking of all kinds of films: newsreels, documentaries, animations, feature films; they captured the turbulent 1960’s on the island and around the world.

Providing a brief history of the island, Stock touched on the tumultuous years she labeled the “special period.”

“And then came 1989,” Stock said. The breakup of the Soviet Union and end of the Cold War resulted in the loss of Cuba’s major trading partner and political ally, leaving the nation struggling in the midst of an economic crisis and prevalent insecurity.

“But to say that this was a pivotal year in Cuba would be an understatement,” Stock said.

Filmmaker Fernando Perez, who during this time was working on a project titled “Madagascar,” relayed to Professor Stock that every day he worked on the film he believed it to be his last day as a filmmaker.

Stock recently led her students in a research trip to Cuba during the College’s Spring Break.

Cindy Centeno ’16 enrolled in Stock’s “Theories of Visual Culture” during her sophomore year and is currently a student in her “New Media Workshop” course.

“This course and our trip to Cuba was life-changing for me in terms of career paths. It solidified what it is that I want to do with my life: to travel the world, seek out the stories of people, places, cultures, social issues, etc. and share them with the rest of the world through visual media,” Centeno said.

Stock became a member of the College faculty in 1993 after completing her Ph.D. at the University of Minnesota in cultural studies with an emphasis on Latin American cinema. After joining the faculty, Stock introduced film courses into the new Hispanic studies curriculum and helped found the film studies minor, which has since evolved into an interdisciplinary major.

According to Provost Michael Halleran, Stock is able to engage students in a wide array of topics under the umbrella of Film Studies and Hispanic studies.

“She does this through translating an array of texts, subtitling documentaries, filming interviews, curating exhibitions and more,” Halleran said.

Stock is also the author of four books on Cuban cinema, the most recent of which, “On Location in Cuba,” was released in Havana on Monday, April 4.

Stock was recently selected to receive funding totaling $14,000 to create a course that brought student researchers at the College to Cuba over spring break in 2016. The support for the project came from the Sharon Philpott and Marta Perez Faculty-Student Research Endowment and the Charles Center fund for spring courses.

The SPMP endowment annually funds awards to provide Hispanic studies majors with the opportunity to conduct research with support from faculty mentors. Stock is also the founder and director of Cuban Cinema Classics, an initiative that facilitates access to subtitles Cuban documentaries in the United States.

Carl and Martha Tack, both members of the class of 1998, founded the Tack Faculty lecture series to allow the College’s faculty to address the community on a topic of interest at least once per semester. Halleran spoke briefly before Stock’s lecture, introducing the Tacks and stating the purpose of the lecture series.

“Our intellectual energy as a university comes first and foremost in the creative work of our faculty as they conduct research and lead students into greater understanding and new knowledge,” Halleran said. “So we should not hide our light under a bushel, but rather let it shine brightly.”