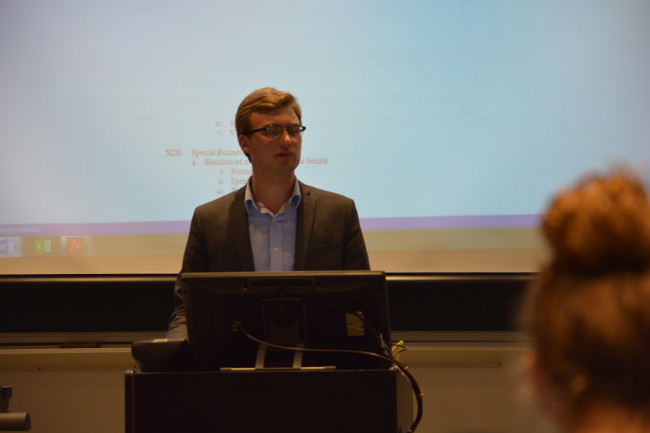 During the first meeting of the 324th session of the Student Assembly senate Tuesday night, senators elected Sen. Annelise Yackow ’18 as senate secretary and Sen. Danny O’Dea ’18 as Chairman of the Senate.

Yackow was elected by a majority of the senators through a roll call vote. Her election was effective immediately.

Senators nominated Sen. Danny O’Dea ’18 and graduate representative Mitchell Croom M.A. ’16 for Chairman of the Senate. Croom had prepared a platform to share with the senate and focused on the three issues that he said were most important to him. These three issues centered around reinvigorating the executive committee, staying neutral as an administrator and handling SA elections in a more effective manner.

According to Croom, it is important for the Chairman of the Senate to take a more neutral role in leading discussions on legislation. As part of this, Croom promised that if elected, he would not casually sponsor legislation.

“If you elect me chair, I will not sponsor or cosponsor any piece of legislation that is not part of my platform of institutional reform because I do not want to stifle the discussion we can have as a body.” Croom said. “If a new freshman senator is sitting here in October and they have a problem with a bill and they’re thinking ‘This is a small problem but I don’t want to let it go,’ and up at the front is the senate chair who is saying that he supports the bill, then that new freshman might not voice their objection. I don’t want to stifle that debate, even if it isn’t the best objection.”

In his speech, O’Dea discussed legislation he had sponsored and introduced in the 323rd session as well his goals for the 324th session he would implement if elected. He cited legislation such as the SA – 75 resolution, a bill he sponsored that charges members of the senate with attending 75 student organization meetings by the end of this semester, as an example of him pursuing his passions as a senator. He also cited his experience as the chair of the senate code revision and student life committees as qualifying skills for the position.

O’Dea said that important issues he would like to address included making meetings more effective, furthering interdepartmental transparency with SA’s executive branch and improving the sociability of the senate.

In his speech he said he would like to host casual dinners and meetings to discuss legislation and establish a senate representative in the cabinet.

O’Dea was elected through a majority vote by roll call. 18 senators voted for O’Dea and five voted for Croom. Following his election, O’Dea took the place of outgoing Chairman of the Senate Dan Ackerman ’16 and presided over the rest of the meeting.

While deciding who to vote for, senators discussed things such as each of the candidate’s records in the senate, their involvement at the College of William and Mary and the feasibility of their platforms. Additionally, there was much discussion on whether or not graduate representatives were inherently disadvantaged when running for such a position because of their different role on campus. While most senators agreed that both candidates were well qualified for the position, the majority thought that O’Dea’s previous work in the senate established him as the more qualified candidate.

According to Ackerman, parts of Croom’s proposed platform were not feasible because they currently did not align with SA code. He also said that he has observed Danny’s commitment to learning the code and skills needed for serving as a senator.

“Earlier in my term as senate chair, I would send out a message saying that we would be working on bill writing at the Student Assembly house and that anyone could stop by and practice writing legislation,” Ackerman said. “Every weekend, only a small handful of people showed up and I don’t think Danny ever missed one of those meetings.”

At next week’s meeting, O’Dea will be responsible for overseeing the unofficial election of a senate historian. Following with code, this election happens during the second meeting of each new session.