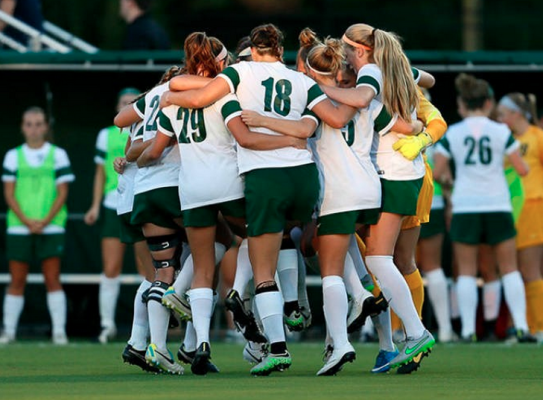 In 2015, the Tribe won the CAA regular season title and was selected to play in its 25th NCAA tournament as a program. In 2016, the College is the CAA’s preseason favorite. Six starters are returning, headlined by senior defender Clara Logsdon, a First Team All-CAA selection last season. Junior midfielder Rachel Moore (Second Team All-CAA), junior forward Sami Grasso (Third Team All-CAA), and sophomore midfielder/defender Mackenzie Kober (CAA All-Rookie team) will also be ready to take on even larger roles for the Tribe this season.

In 2015, the Tribe won the CAA regular season title and was selected to play in its 25th NCAA tournament as a program. In 2016, the College is the CAA’s preseason favorite.

The scoring attack of the College will have to regroup and rebuild after the graduation of Samantha Cordum ’16 and Katie Johnson ’16, who tied for the team lead last season with seven goals each. Redshirt freshman Sara Segan is expected to quickly gain playing time and contribute after she missed all of last season due to injury. In the midfield position, Moore leads a talented group of returners that should allow the Tribe to control possession and pace of play in the middle of the field. Junior Elysee Branton will likely play extended minutes alongside Moore in the defensive midfield position. Seniors Kady Kriner and Haley Kavanaugh will likely slide into attacking midfield roles for the Tribe this season.

Logsdon will again head the College defense, joined by redshirt junior Corrine Giroux. Despite battling many injuries during her collegiate career, Giroux is healthy and ready to contribute in her junior campaign. Junior Haley Kent, who started all 22 games last season, will play opposite of Kober as the two outside defenders. In goal, the competition to replace Casey was fierce, but it appears that redshirt junior Grace Smith has earned the early nod through the first three matches.

Even with a strong returning group, including two players named to the preseason All-CAA team with two others receiving honorable mention nods, the competition for the Tribe in the CAA is as stiff as ever. Four CAA teams made the NCAA tournament last season, the most in conference history. Furthermore, the Tribe faces a tough non-conference schedule, including dates with Old Dominion Sept. 1, Virginia Tech Sept. 4 and Virginia Commonwealth Sept. 8. The conference portion of the schedule is highlighted by a key matchup with James Madison in a rematch of last year’s CAA tournament title game, which the Tribe lost.

Despite the loss of standout Casey and a tough schedule, the Tribe looks poised to strongly contend for the conference title and return to the NCAA tournament.