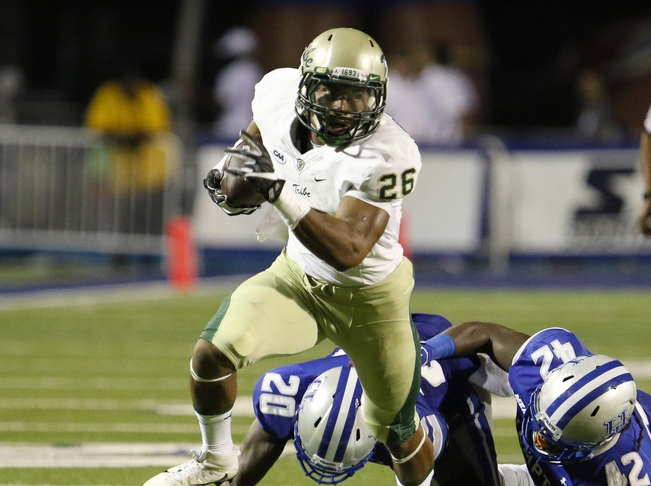 About halfway through the third quarter, sophomore wide receiver Jack Armstrong recognized he was in a one-on-one matchup on the right sideline. He streaked past his man and caught a well-timed ball from senior quarterback Steve Cluley to give William and Mary a 14-7 lead it would not surrender, eventually topping Hampton by a score of 24-14 Saturday evening.

After the offense went three-and-out in its first series, senior punter Hunter Windmuller saw his punt blocked. This led to great Hampton field position for the Pirates’ first drive. Starting just 10 yards out, Hampton capitalized on a fourth and goal from the one-yard line to take a 7-0 lead with less than three minutes shaved off the clock.

The Tribe responded well, with Cluley engineering an eight play, 73-yard touchdown drive on the following possession. Cluley went 4 for 5 passing on the drive, including three completions to standout junior wide receiver DeVonte Dedmon. The Tribe offense appeared to be settling into a rhythm as Dedmon capped off the drive by taking a screen pass 18 yards down the left sideline to knot the game at 7-7.

After the College forced a quick Hampton punt, the offense picked up right where it left off, with Cluley throwing a 43-yard strike to Dedmon, who made an unlikely catch while tightly covered by a Hampton defender. The drive fizzled out after this big gain, ultimately the start of what became an unsettling trend of being unable to turn possessions into points.

On the next drive, head coach Jimmye Laycock ’70 rolled the dice and went for it on 4th and 2 to go from three yards from the end zone. The Hampton defense stood tall and stuffed senior tailback Kendell Anderson for no gain. In the drive after, the usually consistent junior kicker Nick Dorka missed wide left from 48 yards.

At the half, the score remained 7-7, due not only to the Tribe failing to capitalize offensively but also to a key interception by redshirt freshman safety Corey Parker in the second quarter, which halted a Hampton drive that was nearly in the red zone.

Cluley and Armstrong connected for the score on the first Tribe possession of the back half, which was followed up by a quick 40-yard touchdown run by redshirt freshman running back Albert Funderburke to give the College a 21-7 lead with 5:34 left in the third. Funderburke appeared to be caught in a sea of Pirate jerseys, but he executed a well-timed spin move and bounced to the outside to break free.

Hampton strung together a strong drive early in the fourth quarter, but the momentum was completely reversed when freshman safety Isaiah Laster made a goal-line interception off a deflection, dashing Hampton’s hopes of a comeback.

The game ended with the Tribe winning by a margin of 24-14, but Laycock was not entirely pleased with the performance.

“We didn’t play a sharp game,” he told Tribe Athletics. “[But] we got after it pretty good in the second half on both sides of the ball.”

Cluley finished with 302 yards passing and two touchdowns with no interceptions, a distinct improvement from his performance last week. Dedmon was again the top target, posting eight catches for 176 yards — both career highs — to go along with a touchdown. The running game was generally ineffective outside of Funderburke’s, who finished with 70 yards and a touchdown. Laycock mentioned in the postgame press conference that Anderson had tweaked an ankle, which may have contributed to the struggles of the running game.

The Tribe looks to open the newly-renovated Zable Stadium with a win next Saturday when it faces Norfolk State at 6 p.m.