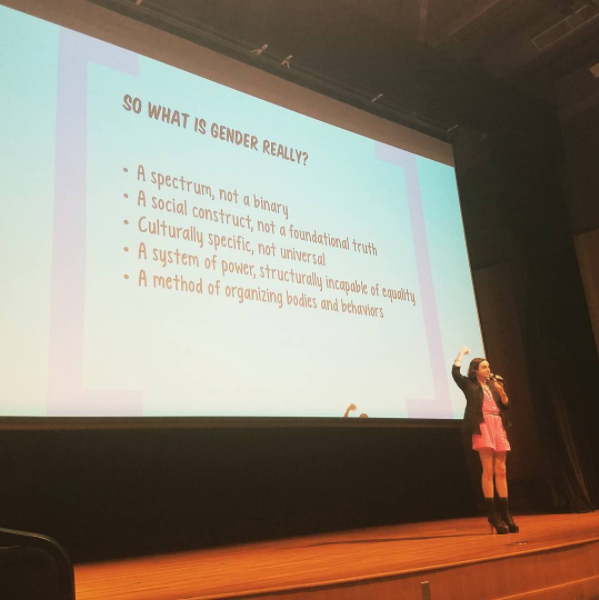 The Commonwealth Auditorium erupted into snaps and exclamations of agreement this past Wednesday as Jacob Tobia strode around on the stage in tall heels, a bright pink romper and a fringed black blazer.

Tobia, a genderqueer and trans activist, hosted a talk about transgender rights and education, speaking on topics both serious and light-hearted. They began the presentation with a discussion of current events.

Tobia was invited to speak at the College of William and Mary for LGBTQ History Month. Sponsored by the Center for Student Diversity and the Department of Diversity Initiatives, Tobia gave a two-hour presentation on gender identity and empowerment, the discrimination that exists against those who are not cisgender, and what actions that can be taken on a college campus and beyond to create a more inclusive environment.

Tobia, who identifies as agender and uses the gender neutral pronoun “they,” has been propelled to the national stage over the past few years. They first appeared on MTV’s “The T Word,” a documentary hosted by Laverne Cox, which focused on seven transgender youth. They went on to be profiled in a one hour MTV special and now are the host of NBC OUT’s “Queer 2.0,” a video column that covers all things LGBTQ+.

“They very much have gone from 0 to 100 in the past two years since I met them,” Erica West ‘17 said. West works at the Center for Student Diversity and met Tobia during the summer of 2014, when they interned together at the Human Rights Campaign, the largest LGBTQ civil rights organization in the United States.

“I’ve been wanting them to come for two years,” West said. “This has literally been a work in progress since summer of 2015.”

West said she got to know Tobia during a time when she was coming to terms with herself and her identity and considered them to be both a friend and mentor. She credits Tobia for much of her education about the queer movement and its culture and history, an education she wanted them to share with the College.

“We have such a growing and visible and vocal queer community on this campus,” West said. “We needed someone to come to campus who speaks to the people here, but also can challenge them, but also represents us. So I was like, ‘Jacob is perfect for this.’”

Tobia concluded the talk by offering up concrete changes to be implemented. They spoke about digital engagement by those with large audiences with an emphasis on a decentralization of gender, the need for change and acceptance in schools and the workplace and an effort to reform the cultural representation and visibility of those who identify as trans or gender nonconforming. As for college campuses, Tobia stressed the need for gender-neutral bathrooms and living options on college campuses.

“What inspires me about Jacob is their ability to live life as their truest self,” Emma Shainwald ’20, a member of the Lambda Alliance, said. “They aren’t scared about being who they want to be. And I admire that so much.”

Shainwald came across Tobia a few months ago online and was fascinated by their videos about gender and sexuality. When she heard that they were coming to campus, Shainwald canceled all her other plans for the night and gathered with other students and faculty to hear Tobia’s take on gender issues.

“So often gender ends up being about power, privilege, bullying, exclusion and stereotypes, but gender shouldn’t have to be about all of that,” Tobia said. “Gender should be about creativity, self-expression, fun, joy, happiness and community.”

In addition to talking about finding joy in different kinds of self-expression, Tobia ended the night with some practical advice on how to change culture.

“So ask yourself . . . what am I doing to make my community a more gender-inclusive place?” Tobia said. “How am I showing others around me that it’s okay for them to be who they are? The only way that we transform [culture] is by asking ourselves these questions, over and over again, cyclically, making a meditation out of it and thinking constantly about ways that we can create a more inclusive world for one another and a world that allows people space to feel good. That’s what it’s about.”