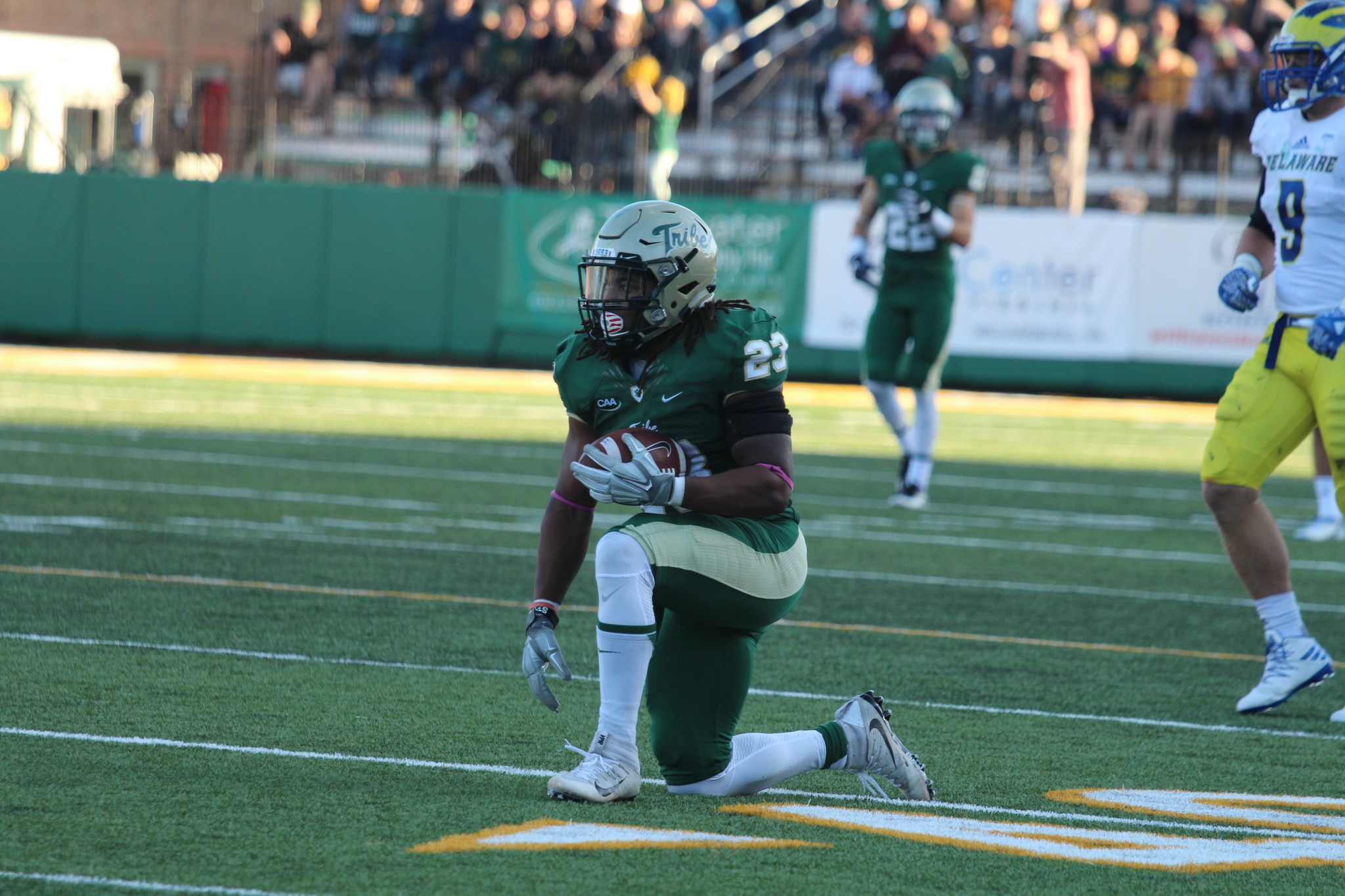 Having under a minute to play and holding good momentum, William and Mary held possession at Maine’s 30-yard line, set to score and either win or send the game to overtime Saturday at Zable Stadium. Instead, junior tight end Andrew Caskin had the ball forced out of his hands by the Black Bears, who recovered the ball to seal the Tribe’s 35-28 loss.

Coming off of its bye week, the College had high expectations looming over it with only four games remaining in the regular season. Saturday’s loss gives the Tribe a 3-5 overall record and a 1-4 conference record, placing it in ninth place in Colonial Athletic Association standings, a hole that will likely bar the College from playoff contention. Facing Maine (5-3, 4-1 CAA) for the first time since 2013, the Tribe had defensive gaps in the first half that gave the Black Bears their necessary edge to stop a Tribe victory.

Though the first quarter began with redshirt junior cornerback Aaron Swinton getting his third interception in two games, Maine shut down the subsequent drive and kept momentum. The Black Bears struck first with a 26-yard bomb from Maine quarterback Dan Collins to receiver Micah Wright to establish a 7-0 lead. Senior quarterback Steve Cluley was intercepted at the Maine 37-yard line on the Tribe’s second drive, which the Black Bears took advantage of with a combo of Collins’ passing and Maine running back Zaire Williams’ rushing. Williams punched in a touchdown late in the quarter to make it 13-0 after Maine missed the extra point.

Cluley made several key passes downfield to receivers junior DeVonte Dedmon and sophomore Isaiah Kinder to put the Tribe’s first points up 37 seconds into the second quarter. Dedmon caught an 18-yard pass for the score, cutting the College’s deficit to six. After trading three-and-outs, Maine extended its lead with a 4-yard rushing touchdown and made the two-point conversion to boot for a 21-7 lead. That 14-point lead became a 21-point lead after a 23-yard Tribe punt gave Maine field position at their own 44. The Black Bears exposed holes in the defense for three plays over 10 yards, including the 15-yard pass that would score Maine’s fourth touchdown. The College scored on its next drive to gain some pre-halftime momentum, with senior running back Kendell Anderson getting solid yardage that was capped with his 23-yard touchdown rush. At the half, the score remained 28-14.

“Basically we put ourselves in a pretty good hole there in the first half,” head coach Jimmye Laycock ’70 said. “Defensively we were doing things that aren’t normally done, or not doing things that we usually do, whatever way you want to look at it. It’s disappointing.”

The Tribe had new life coming out of the locker room, slowing the pace down for a six-minute, nine-second drive to begin the third quarter. The College would score, again via a handoff to Anderson for his second touchdown of the day. However, on the drive, Cluley was picked off, but offsetting holding penalties on both sides gave the College a huge break to negate the play and allow the eventual touchdown to occur minutes later. Within seven points at 28-21, the Tribe needed to hold strong and repeat that offensive force to tie the game. Instead, the College gained just seven yards on their next drive after the defense held Maine back, giving the Black Bears a chance again with a punt.

The punt on that drive would prove the difference maker, as Wright returned the punt 67 yards to score the fifth and final touchdown for the Black Bears, putting them up 35-21 after the extra point. The Tribe would hold Maine from scoring any more in the half, but the damage was done as the College began its comeback bid. The final touchdown of the day came via a Cluley rush for four yards into the end zone, though the real hero of the drive was Anderson, who broke out for 43 yards on the setup play one down prior.

The fourth quarter was scoreless, though the Tribe had two promising drives. Both ended in forced fumbles and turnovers. During the quarter, a few of the receivers, including Dedmon, were forced out with injuries, giving Cluley fewer familiar targets. The first turnover came with eight minutes remaining when Cluley hurried a pass to Anderson for a nine-yard gain to the Maine 24-yard line, which was stripped and recovered by the Black Bears at their 16-yard line. The second turnover came on the final College drive of the game as Caskin fumbled when hit by Maine defensive back Najee Goode on what would have been a chain-moving play to the edge of the red zone, effectively ending the game.

“Making a comeback I thought we were very confident in what we were doing offensively,” Laycock said. “You get two turnovers going into the red zone, that’s tough, that’s tough to overcome.”

Making a comeback I thought we were very confident in what we were doing offensively,” Laycock said. “You get two turnovers going into the red zone, that’s tough, that’s tough to overcome.”

Though the game looked dominated by Maine with the big first quarter and defensive stops, the stat sheet shows a close game. The Tribe outperformed Maine 469-466 in total yardage, with the breakdown being 285 Tribe passing yards to Maine’s 280 and 184 rushing yards to 186. Anderson led the rushers with 151 yards, his fourth straight performance of 100 or more yards rushing. Cluley went 26 for 45 with 285 yards and one touchdown.

“I really didn’t think [Maine] was going to stop us at the end,” Cluley said. “We were just moving down the field, calling what we wanted and making it work. It was unfortunate how that drive ended but it’s not the whole game in that play.”

Cluley’s top receiver was junior wideout Daniel Kuzjak with 77 yards on five catches. Dan Collins of Maine ended the day 19 for 33 with 280 yards and a pair of passing touchdowns, a low completion rate after starting out with 13 of the completions coming before the second quarter was halfway over. Defensively, redshirt freshman safety Corey Parker led with six tackles (five solo) and a break-up. Swinton had the interception as well as three solo tackles while redshirt freshman defensive end Joe Suarez made a few plays with the lone Tribe sack and a tackle-for-loss.