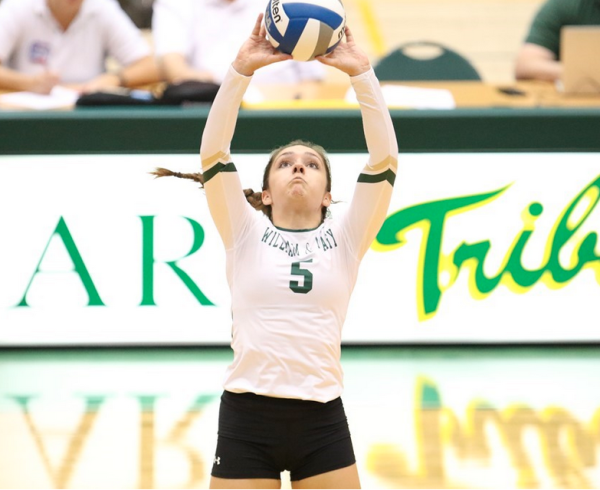 William and Mary extended its losing streak to six with a 3-1 loss at home Friday night to James Madison. This loss keeps the College at the bottom of the Colonial Athletic Association.

“After the first match, we came out with a lot of energy, but they had made a lot of mistakes in the first set, and they didn’t in the second,” said junior outside hitter Sydney Biniak. “We weren’t expecting them to do anything different than come back and fight on. They are a great team.”

The Dukes came out after their loss in the first set with a revamped vigor that the Tribe was not expecting. Long and competitive rallies kept players and spectators alike on edge.

“Coming out in the second set we lost a little bit of our energy,” freshman outside hitter Alex Stein said. “We did a really good job of ending those rallies. Everybody was determined to put the ball away and get the ball up. Nobody gave up at any point during the game.”

“Coming out in the second set we lost a little bit of our energy,” freshman outside hitter Alex Stein said.

“We did a really good job of running our offense and closing the block,” Stein said. “Everyone was doing so well blocking, hitting, and passing.”

Biniak and Larrick both secured four blocks for the Tribe. Senior back row defender Gabrielle Pe and freshman outside hitter Samantha Conway each served two aces.

“I am extremely proud of them. The fact that they give their all is all I can ask for and their attitudes are great,” said head coach Melissa Ferris. “Whether we win or we lose I’m proud of this team; I love each and every one of them.”

There are four CAA games left before the championships kick off. The Tribe will take on UNC-Wilmington Friday, Nov. 4 and Charleston Sunday, Nov. 6.