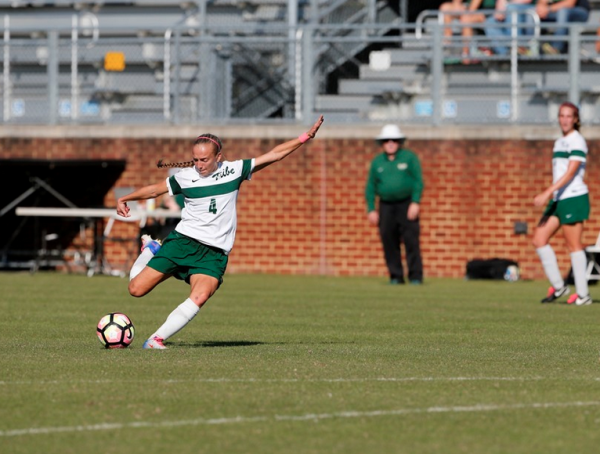 Facing a 2-1 deficit on the road over 80 minutes into the contest, the Tribe appeared like it was simply going to run out of steam. Junior defender Elysse Branton, not usually an attacking player, changed the College’s fate in a matter of seconds. Coming into possession just inside the midfield line, Branton sprinted past a pair of Seahawk defenders and then dodged to the right of the charging goalie to bury the ball into the back of the net. Just like that, the Tribe found an 82nd minute equalizer that breathed new life into the team.

The College (10-7-2, 4-4-1 Colonial Athletic Association) rode the wave of the equalizer through a scoreless overtime period and ultimately prevailed 5-4 in a penalty shootout to end the Seahawks’ (10-5-4, 4-3-2 CAA) season.

Early in the game, the Tribe showed no signs of eventually needing Branton’s late-game heroics, as they controlled tempo and possession early. Senior midfielder Haley Kavanaugh took a hard shot on goal in the ninth minute, but UNC-Wilmington keeper Carolyn Huddy came down with the save.

Just eight minutes later, redshirt freshman forward Sarah Segan struck her 10th goal of the season to extend her team scoring lead and give the Tribe a 1-0 lead. Segan’s goal this time was pure individual skill, as she corralled the ball on the left side of the field and sliced back to the inside around two defenders. Finally, she slid just to the right of the third and final defender as she placed the ball perfectly out of the reach of the goalkeeper and into the bottom left corner.

The Seahawks responded nearly immediately, controlling the game from just after Segan’s goal until they found the answer. Such an answer came in a big way at the 28:07 mark, as Brittany Matsinger put a shot just off the fingertips of redshirt junior keeper Grace Smith and into the back of the net. Matsinger’s goal came after a pair of pretty passes which led from Kennedy Ulrich to Moa Jarl to the goal-scorer.

With the score knotted at 1, the Tribe and Seahawks played fairly evenly, with each team having several close chances, but nothing coming to completion for either side.

The UNC-Wilmington breakthrough came in the 50th minute, as Matsinger fed a long through ball to Callie McClain, who converted in a one-on-one chance against Smith to give the hosts a 2-1 advantage.

The Tribe offense immediately responded to the deficit, spearheaded by junior forward Sami Grasso. Grasso took two strong shots on goal in a three-minute span, but both were saved.

From there, the College finally got its golden equalizer from the foot of Branton, who could not have picked a more opportune time to score her first goal of the season.

The Tribe opened the first overtime period with aggression, as the team fired four shots. The most threatening of these came from junior defender Haley Kent, who saw her shot saved in the 93rd minute. With just 15 seconds left in the first overtime session, the Seahawks threatened to steal all Tribe momentum and win the game when they were awarded a free kick just outside the box. The College’s wall stood tall, blocking the shot to preserve the 2-2 tie into the second overtime period.

I thought we deserved to win in regulation and in overtime,” said head coach John Daly to Tribe Athletics. “We played our hearts out, and fully deserve to go through.”

In the second overtime session, the Tribe controlled the game, firing two shots to none for UNC-Wilmington. With the game still deadlocked at 2 after 110 minutes of action, the Tribe and Seahawks advanced to a penalty shootout, where the College prevailed in dramatic fashion 5-4. The winning pair of plays for the Tribe came in the sixth round of the shootout, which was sudden death. First, Smith came up with a tremendous save on the Seahawk shot. Next, with all the pressure on her, freshman forward Charlotte Hyland showed composure beyond her years as she calmly buried her penalty kick to give the Tribe the win.

“I thought we deserved to win in regulation and in overtime,” said head coach John Daly to Tribe Athletics. “We played our hearts out, and fully deserve to go through.”

The road to the CAA tournament title gets even harder for the Tribe in its semifinal matchup, as they must host top-seeded Northeastern at 5:30 p.m. Friday, Nov. 4.