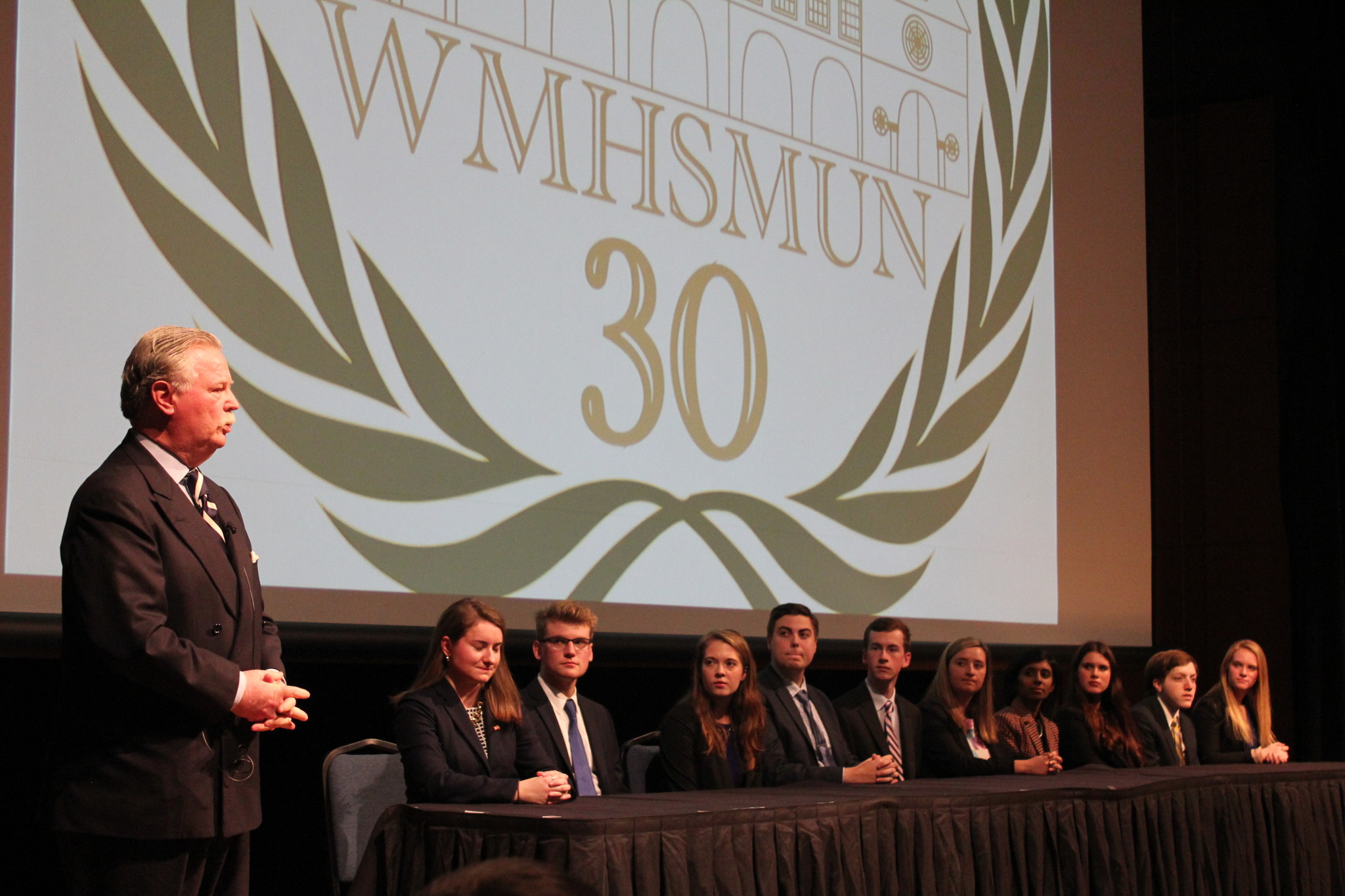 It was 10 minutes before the closing ceremonies of WMHSMUN 30, the 30th Model United Nations conference hosted at the College of William and Mary, and there was still one major problem for Alyssa Harrison ’17 and the rest of the Secretariat to solve: Could they find a granola bar in the Williamsburg Lodge? After a careful search, the Chief of Staff Maddie Burton ’17 managed to find one for Harrison, who over the weekend had few chances to eat.

Ordering lightsabers from Amazon, finding enough bagels to feed a staff of 144, organizing bus transportation for more than 1,378 high school students, editing 27 background guides on diplomatic issues, and preparing for any last minute emergencies that might arise over the weekend. These are just a few of the tasks that the Secretariat of WMHSMUN had to discuss in emails, Facebook group messages and meetings in the past nine months to prepare for their 30th anniversary conference.

Colleges across the nation host mock-model UN conferences that allow high school students to immerse themselves in international relations for a weekend. High school student delegates are brought and supervised by teachers from their school, who are referred to as sponsors. The delegates are led through committees where they debate historical or fictional issues, guided by their Committee Directors.

This year, 63 schools attended the 30th WMHSMUN, which took place Friday through Sunday. The conference was organized by a group from the College’s International Relations Club, who together compose the conference’s Secretariat.

The Secretariat is made up of 11 members. Harrison served as this year’s Secretary-General, the leader of the Secretariat.

“I’m responsible for managing all of the nitty-gritty pieces of WMHSMUN and making sure that everyone is carrying out their appropriate duties,” Harrison said about her position.

Harrison led the Secretariat in its weekly meetings to plan for the conference. She was also the main liaison to any of the College’s administrative offices that the Secretariat needed to collaborate with for the weekend.

Jack Nicol ‘18, the Director-General, helped to work out most of the major logistical details of the weekend, including organizing transportation for the delegates and reaching out along with Harrison to administration offices around campus. Burton served as chief of staff. She designed the staff application and assigned applicants to different committees and duties for the weekend.

Henry Crossman ’19 and Emily Kinney ’19 were the Undersecretary-Generals in charge of organizing the committees. They oversaw the 35 directors of the conference and edited the background guides that each director wrote over the summer for their committees. Crossman oversaw the General Assemblies, which focus on larger-scale issues, while Kinney handled the smaller, more specific Specialized Agencies, some of which are historical and some of which are fictional.

“These [Specialized Agencies] committees aren’t typical UN committees,” Kinney said. “So we have one that’s the trade federation from Star Wars.”

It was Kinney who purchased the lightsabers from Amazon, much to her mother’s confusion, she said.

Jason Nykorczuk ’18 was the registration director and handled correspondence with sponsors before and during the conference. The Director of Conference Development Claire Kartoz ’19 oversaw the social events for the weekend, including the Saturday night delegate dance.

Schools registered for the conference through its website, which the Director of Technology Gregory Wicks ’17 kept up and running. Wicks also designed an app for delegates and sponsors to use over the weekend, which included a map of campus and the event schedule.

The Secretariat’s work for the conference started in the previous semester and continued over the summer. When the fall semester began, the Secretariat met every Wednesday night in Tyler Hall, where Harrison could take meeting notes projected on a large screen.

Every meeting would begin with the Secretariat’s best delegate contest. Each member would say something fun they did that week or an accomplishment unrelated to WMHSMUN. One member would then be selected as the “best delegate” for that week. One delegate won for purchasing a new car. Another winner took a great nap.

All the Secretariat’s work finally came to fruition over the weekend. The months of planning culminated with the swarming of delegates through the Sadler Center and the rest of campus.

In the longest and second-to-last meeting before the weekend, Harrison had the staff go over everything it needed to do before the conference began. Just a few of the items on Harrison’s list were buying paper to use for awards, writing both her closing and opening speeches, talking with the keynote speaker Professor Michael Butler and running to Costco for any of the Secretariat’s last minute needs for the conference.

Every other Secretariat member had similar to-do lists, containing tasks ranging from larger duties to ironing out other small details that popped up over the weeks, such as what specific kind of bagels staff would be eating during their staff training that weekend and during the conference.

“I have bagels for this weekend,” Burton, the chief of staff who also handled food, said. “Once we see how that goes, I will order bagels for next weekend. That way if we don’t like Sadler we aren’t committed to using them.”

All the Secretariat’s work finally came to fruition over the weekend. The months of planning culminated with the swarming of delegates through the Sadler Center and the rest of campus. The delegates spent most of their time in committee, but they also had opportunities to go on campus tours and attend the conference’s two social events: the WMHSFest Fridaynight, which featured a photo booth and free snow cones for delegates, and the delegate dance Saturday night.

Many delegates at the conference this year had already attended previous WMHSMUNs. Laura Chu, a senior at Thomas Jefferson High School, said she has attended every year since she began high school.

“It’s better and better every time … just as part of its 30th anniversary, I think WMHSMUN does a good job of maintaining its traditions with their opening ceremonies, the videos they show, their closing ceremonies,” Chu said. “And as for me since I’ve gone here four years I keep seeing the rotation of Secretary-Generals.”

To start and end the weekend, the conference had its opening and closing ceremonies. Both provided the opportunity for Harrison and the rest of the Secretariat to be thanked for all their hard work.

The opening ceremonies, which took place in Commonwealth Auditorium in Sadler and were attended by President Reveley, included a speech by Harrison and a presentation on the value of international relations by the keynote speaker, professor Michael Butler. Arielle Hankerson ’17, the president of IR Club, introduced Harrison.

“It is my honor to speak a little bit more about the woman who has been a driving force behind this year’s conference,” Hankerson said. “There’s no one on this campus who loves WMHSMUN more than Alyssa Harrison.”

The closing ceremonies took place Sunday in the Virginia Room at the Williamsburg Lodge, a space big enough to seat every delegate, have a stage for the Secretariat to sit on top of, and for two projectors to play the closing video of the conference. After the closing video, which included a WMHSMUN version of the song “Closer,” directors distributed delegate awards.

“On three separate Secretariats, I have seen approximately 5,798 emails, 35,982 Facebook group messages, 27 other Secretariat members, three inspiring past Secretary-Generals, 3,742 delegates and, in my college career, 651 days on the WMHSMUN Secretariat,” Harrison said.

After the awards, Harrison thanked each member of the Secretariat for their work and support. Nichol then thanked Harrison in return, crediting her for inspiring him during his freshman year when they staffed that year’s WMHSMUN.

“I saw somebody that weekend who was driven, motivated, intelligent, and a strong woman, something we desperately need to see in the world more,” Nichol said.

Harrison, who had tears in her eyes, closed out the ceremony and the weekend for good by taking a quantitative look at all the work put into WMHSMUN in her time at the College.

“On three separate Secretariats, I have seen approximately 5,798 emails, 35,982 Facebook group messages, 27 other Secretariat members, three inspiring past Secretary-Generals, 3,742 delegates and, in my college career, 651 days on the WMHSMUN Secretariat,” Harrison said. “Today is that final day, so thank you all for making this my best and last WMHSMUN.”

Right after that, delegates began their journey home, and after months of planning and hours of meetings and messages for all of the Secretariat, the one short weekend was over.