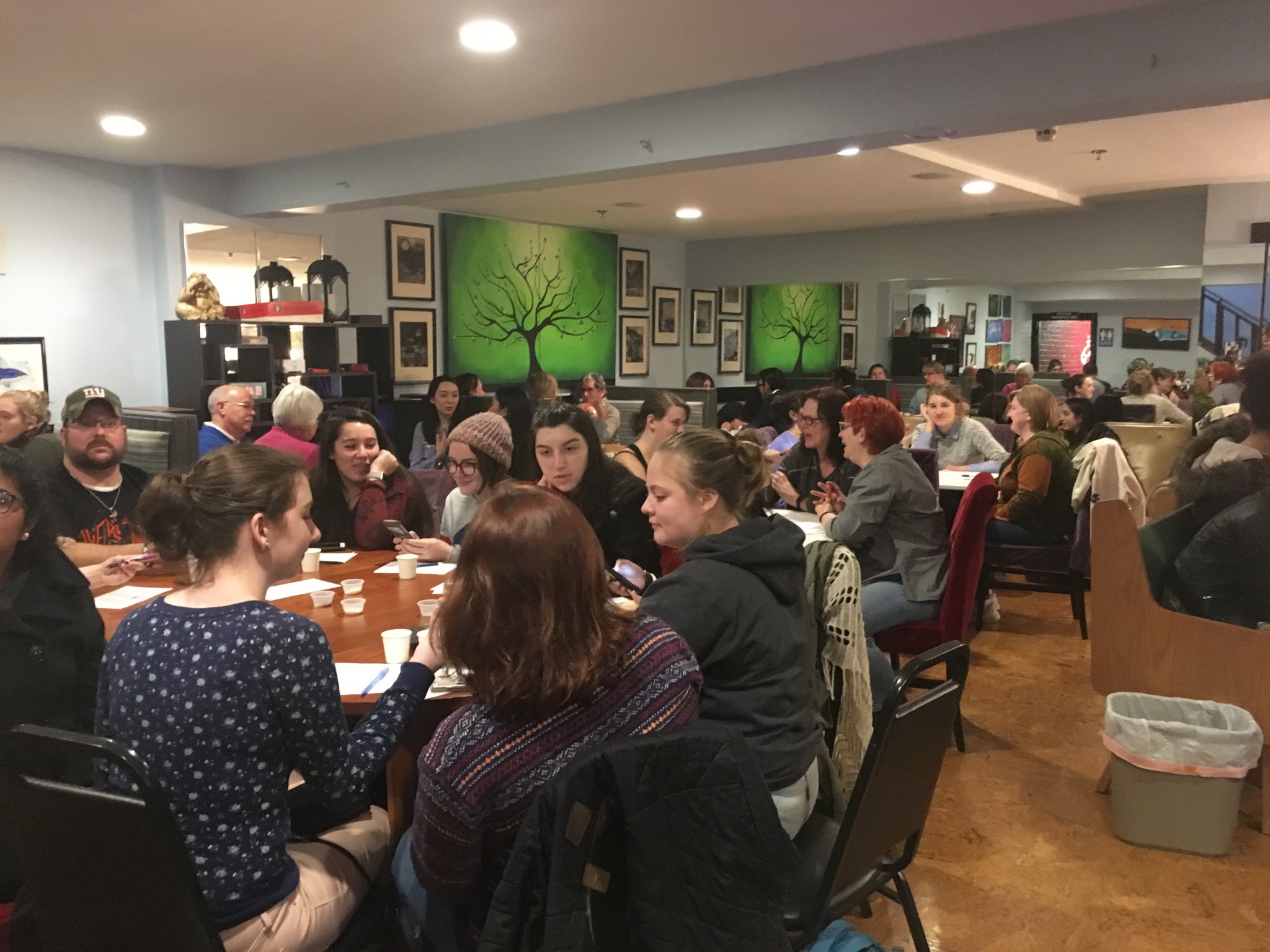 The inspiration came not only from The Spice and Tea Exchange’s employees, but also from a desire expressed by the community to learn more about tea and how it is made.

“We’ve always kind of had a few people here and there talking about how cool it would be if [we] did a tea school or some kind of tasting … and we had kind of gone through the past year thinking about possibly doing one,” said Shawver.

Space is limited in The Spice and Tea Exchange, so Eric Christenson, the owner of LOKAL, helped set the idea in motion by offering up the basement of LOKAL.

The event began with a short history of tea given by Haley Zimmer, the inventory specialist at the Spice and Tea Exchange.

“A couple thousand years ago, legend has it that some emperor in China named Shennong was sitting underneath a tree, and he had a cup of hot water and this little tea leaf plant floated in there and he was like, ‘I wonder what can happen if I processed this somehow,’ and made it into a proper cup of something to drink,” said Zimmer. “And thus, tea was born.”

Attendees of the Tea School were given four different sugars to pair with the five teas provided throughout the event. Charts were also provided, which attendees used to track the type, brewing time, temperature, amount, tastes and smells of the teas provided.

The first sample of tea was an earthy Ruby Oolong, which Zimmer recommended attendees pair with the coconut sugar provided.

“The coconut sugar tames the woodiness,” said Kim Hasty, a local resident and tea-drinker. “To me it’s just calming. I love to sit and have a cup in my hand and the warmth and everything.”

“They are all mostly organic and as ‘everybody-friendly’ as we could make them,” said Zimmer.

Among the favorites were the Blood Orange, White Tropical and Ruby Oolong.

“We are thinking about offering it either every month or every other month from here on out, just because of how much excitement we’ve been able to drum up which is beyond awesome,” Shawver said.

The Tea School not only provided attendees with new knowledge of their favorite teas, but also brought together members of the community over their interest in tea. Students of the College of William and Mary took the opportunity to mingle with Williamsburg residents. Locals Bruce and Nancy Hubbard sat with William and Mary students Erika Manemann ’19 and Gwen Blasco ’19. The Hubbards are tea drinkers and were excited for the opportunity to learn more about different types of teas.

“I just thought it would be interesting. I was in the store because Eric is our neighbor and my husband and I enjoy tea and neither of us are coffee drinkers,” said Nancy Hubbard. “They have lots of different teas and we thought it’d be fun to learn more.”

Many attendees were drawn to the event by a shared interest and love of tea. Student Yulia Buynova ‘19 was no exception.

“I really like tea,” said Buynova. “I really want to know more about tea and the history of tea and how teas differ.”

According to Christenson, this will not be the last class offered at LOKAL.

“This is the first in a series of different types of classes and things we’re going to be doing here. Looking at healthy things and tea is one

of the things that we have a lot of here, and we partnered with the Spice and Tea Exchange to serve their teas here as well,” Christenson said. “We’ll be doing other classes around fermentation and pickles and making bread.”

Before the last sample was served, snacks were provided by both LOKAL and the Side Door Bakery, which will be opening soon in Williamsburg.

“We are thinking about offering it either every month or every other month from here on out, just because of how much excitement we’ve been able to drum up which is beyond awesome,” Shawver said. “We definitely owe it to all of the William and Mary students and all of our dedicated customers and just tea lovers in general, so we’re always happy to have people come out that share our passion as well because obviously, all of us, we really love tea so it’s been a lot of fun being able to share that with others.”