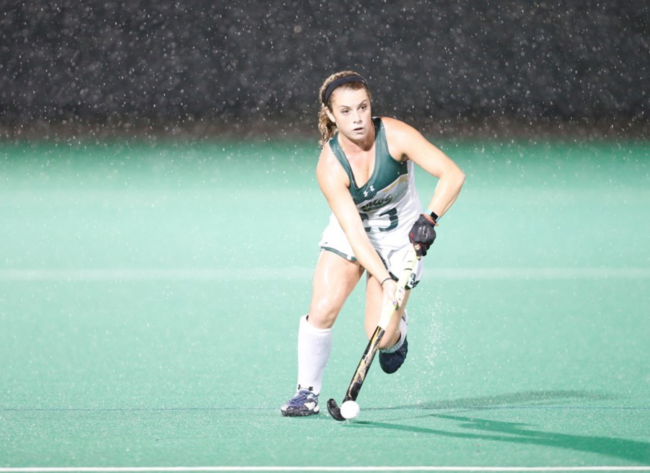 Last weekend, the Tribe traveled to Ann Arbor looking to extend its three-match winning streak. Friday, the College squared off against national powerhouse and the seventh-ranked Michigan Wolverines. The Tribe pulled the upset 1-0. Saturday, the Tribe took on California-Davis. Once again, the College emerged victorious, this time by a two-goal margin, 4-2.

Less than 10 minutes into the match, sophomore forward Woodard Hooper blasted a shot into the back of the net to give the College a 1-0 advantage. Senior forward Cammie Lloyd assisted on the goal, passing the ball to Hooper and allowing her to put the Tribe ahead. The match featured very little offense, with the College only managing six shots and two on goal, while the Wolverines only had five shots with one on goal.

The Wolverines’ only shot on goal came only a minute after the Tribe’s goal, but sophomore goaltender Morgan Connor was able to make the save and keep the College ahead. The Wolverines could not muster another shot on goal the rest of the game and the Tribe hung on for a 1-0 upset victory.

Saturday, the College (5-1) looked to maintain the momentum from its huge victory against the Wolverines when it took on the Mustangs (0-5). This match featured much more offense than the Tribe’s match against Michigan, as the College racked up 27 shots, 18 of which were on goal.

The Tribe jumped out to a big lead in the first half, scoring the first three goals of the match. Senior midfielder Emma MacLeod opened the scoring for the College off an assist from Lloyd to give the Tribe a 1-0 lead less than 10 minutes into the game. Later in the half, the College found the back of the net twice more in a three minute span. Hooper scored to make it 2-0 and then senior midfielder Estelle Hughes scored her first goal of the season to give the College a commanding lead. However, the Mustangs fought back to score the next two goals, one in the first half and one in the second to narrow the margin to 3-2. Nevertheless, Lloyd scored for the Tribe with 10 minutes left in the match to seal the 4-2 victory for the College.

The College stayed hot last weekend and stretched its winning streak to five matches after a season-opening loss to Duke. The Tribe looks to keep up its solid play and improve on its 5-1 record when it plays a pair of Atlantic Coast Conference teams next weekend. Friday, the Tribe will take on the Cavaliers in an in-state battle in Charlottesville before returning home for a matchup with Boston College Sunday. Both games will give the Tribe a chance to improve its non-conference record before entering conference play later in the fall.