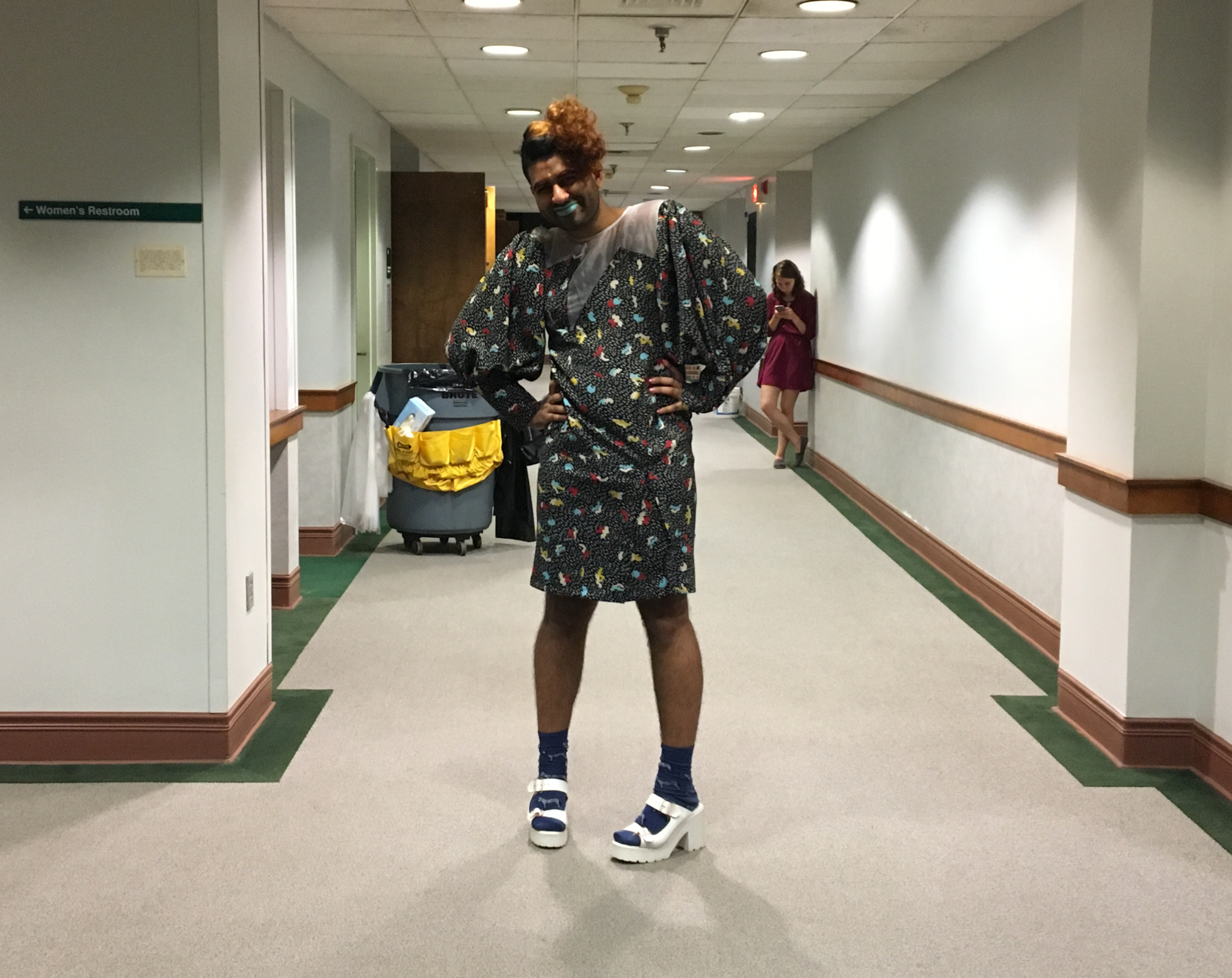 Instead of spending Friday, Sept. 22 with friends, food and fun, countless students packed into Tidewater A to hear Alok Vaid-Menon, a transgender rights activist, give a powerful performance entitled “Femme in Public.”

Vaid-Menon is a gender non-conforming spokesperson for those who don’t fit the gender binary. They use a mix of humor, poetry and dance in their performances to give audiences a fresh take on transmisogynist issues. Last week, they delivered a night filled with education, activism and entertainment.

“I chose Alok specifically because I’ve followed them on various social media platforms for a while. I’m familiar with their work and familiar with their world views, and I really enjoy bringing diverse opinions into my own personal space, which is why I follow them,” Uhrig said. “I think it’s important for people to hear these sorts of things, which is why I invited them to campus because I know they have opinions that matter.”

Vaid-Menon began their show with a poem to set the tone of the event. They repeated phrases such as “where do all the sad girls go” and used the sound effect of blowing wind in the background to create an ominous atmosphere.

I think now more than ever we need students to feel a part of our movement— [students] that are fighting for the safety, dignity, security and joy of all people everywhere.

Uhrig said Vaid-Menon’s style was unique and bringing them to campus was something the administration wouldn’t have considered without student interest.

“This campus prides itself on celebrating diversity, and this is one of the ways in which it can easily do that,” Uhrig said. “And this isn’t something that the administration would think of doing because it’s very out there. [Vaid-Menon is] very open with all of their thoughts, and that’s a very radical thing to do nowadays, and I really appreciated that.”

After the opening poem, Vaid-Menon’s dialogue began in a humorous tone, joking about the recent presidential election and poking fun at a friend who recommended to him the book “Eat, Pray, Love.” However, their tone quickly began to shift and tackle issues such as suicide and trans-genocide.

Vaid-Menon interspersed poems throughout their dialogue in order to present students with a new form of activism centered around art and creativity.

“I think that now more than ever, we need the work of artists and to cultivate creativity and artistry in one another because it’s so easy to become jaded and simple and forget why what we do matters, and I think that every action of descent matters and that it doesn’t matter if you feel like you’re just [causing] only a ripple or its not large scale,” Vaid-Menon said. “I think that all of that actually really matters, and we need art to remember what kind of world was possible.”

Vaid-Menon said many languages, including English, lack the proper terminology to refer to gender non-conforming people. They choose to use they/them pronouns because they believe their personality contains multitudes of characteristics and gender attributes that cannot be fixed to one sex.

One attendee, Holden Mershon ‘20, was at a loss for words after experiencing Menon’s performance.

Uhrig said that they and possibly many other students at the College of William and Mary may be facing issues similar to those Menon spoke about, and their performance was a way for them to hear from someone who had struggled the same way they had.

“By bringing them here, it was kind of like expressing my own feelings on the topic, and I think there’s something special about that,” Uhrig said. “There’s really something special about hearing someone else who struggles in similar ways that you do, and I think some people in this room probably have those same struggles but may not present that way, and so it was really important for them to hear it.”

This campus prides itself on celebrating diversity, and this is one of the ways in which it can easily do that.

Vaid-Menon said that the movement for transgender rights is not one that can be fought by only those personally affected. They called for justice for the transgender community in the form of accountability.

“I think now more than ever we need students to feel a part of our movement— [students] that are fighting for the safety, dignity, security and joy of all people everywhere. I think when I think about what that mandate looks like, it looks like a recognition fundamentally that our power comes from working together and that our power comes from being vulnerable and honest about how scary the times are,” Vaid-Menon said.