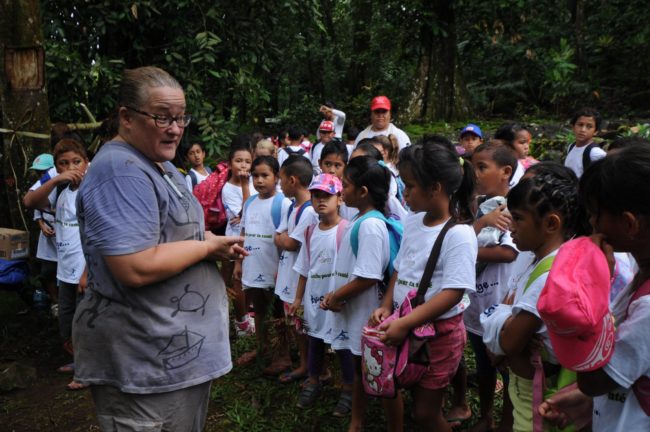 Although activists, researchers and politicians all attempt to address the way inequality plays out in society, in her Oct. 27 talk, anthropology professor Jennifer Kahn explained that she takes a different approach. Kahn said she wanted to explore the question of how social inequality influences societies today in by researching French Polynesian society 1,000 years ago.

Kahn studies complex social chiefdoms in the Society Islands. These societies of chiefs, priests, commoners and land owners were established social hierarchies before French colonization in 1767. Diseases introduced by the Europeans resulted in a decline of the indigenous Tahitian population. Along with their people, the Society Islands lost most of their traditional culture — until Kahn began her research 23 years ago.

This is one of the reasons why doing archaeological research is so important, because a lot of aspects of the traditional culture were lost during this time,” Kahn said.

“This is one of the reasons why doing archaeological research is so important, because a lot of aspects of the traditional culture were lost during this time,” Kahn said. “You can still find an island [where] nobody has done any archaeology, so there is a real need to establish the sequence and answer questions.”

Kahn’s lecture particularly impacted Arianna McFarlane ’19 because it highlighted how much knowledge was lost after 1767 as a result of the colonization.

“Polynesian cultural history is often neglected but so important,” McFarlane said in an email. “It’s important for our understanding of Pacific Islander lives and important to those Pacific Islanders who face cultural erasure from their colonizers.”

Melissa Hudson ’19 said that Kahn’s talk sparked her interest in these communities. Hudson was particularly surprised at how similar many aspects of French Polynesia’s cultural identity were to the Andean communities she studies.

“This is not a [cultural] area of the world I am familiar with at all, so it was very interesting to see parallels between with this and Andean cultures and other ancient cultures that I’ve learned more about,” Hudson said.

In her lecture, Kahn discussed house structures uncovered in the Opunohu Valley. Studying these houses — whether they were round-ended or rectangular structures — illustrated who lived in these quarters, chief or commoner. Also, studying ritual centers, which were clusters of temples located near vital streams, demonstrated the importance of ideology at the time. These ritual centers allowed indigenous elites to hold economic, political and spiritual meetings, thus consolidating power and increasing the social inequality present.

Kahn wanted to share these archaeological sites with Tahitian schoolchildren and other members of the community. Since these structures stood over 600 years ago, it was difficult to portray how pre-contact Tahitian people lived. Funded by the French Polynesian government, Kahn and her Tahitian crew decided to restore select houses.

Kahn also created educational panels placed along the restored trail of houses, which included drawings of what everyday life looked like 1,000 years ago. These tri-lingual panels relay Kahn’s findings in English, French and Tahitian.

Considering there was little research done before hers, Kahn had difficulty representing some parts of Tahitian life. She said she ran into a problem when portraying certain aspects in drawing, particularly with the skin color of the Tahitians. The Ministry of Culture of the Society Islands reviewed her work and other experts collaborated with her to get it right.

Kahn made it a priority to have Tahitian locals involved with her work. From the review process to forming a crew, Kahn wanted to stress the importance of connecting Tahitians with their lost culture.

“I always hire Tahitians to work with me,” Kahn said. “Like many parts of the Pacific, they grow up in a colonial context where [they] learn a lot more about Napoleon and Versailles than they do about any aspect of their Tahitian culture.”

Kahn’s Tahitian crew also gave her a humanized lens through which to view the pre-contact structures. Through their more traditional knowledge of the areas, the crew gave Kahn an authentic perspective through which to interact with the history.

They really have a personified narrative in their head of what they are finding, which is important to me as a scientist to keep their human perspective in my mind,” Kahn said.

“They really have a personified narrative in their head of what they are finding, which is important to me as a scientist to keep their human perspective in my mind,” Kahn said.

Kahn said she hoped that the students in attendance at her talk learned how necessary archaeology is in understanding cultures of the past, especially in Polynesia.