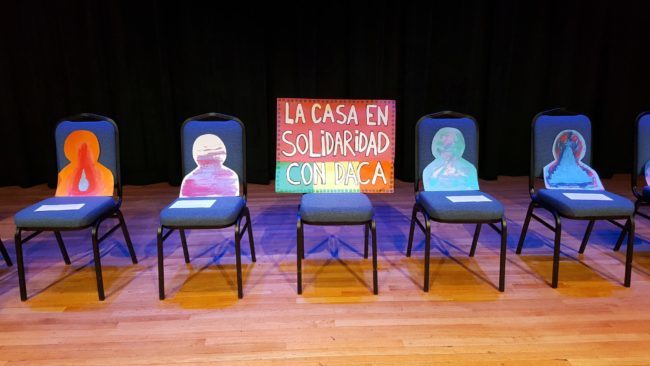 Nov. 1 at 11:11 a.m., a small number of students rose from their seats and walked toward the Commonwealth auditorium in the Sadler Center. In some classrooms, no students rose; in others, like the class of sociology professor Monika Gosin, class was cancelled entirely. Commonwealth filled with students entering and occasionally leaving to head to class, lunch or other events, in between showing their solidarity with student recipients of Deferred Action for Childhood Arrivals.

As students entered Commonwealth, protest signs lined the walls and stage reading: “No human is illegal/Ningun ser humano es illegal,” “My skin color is not a weapon,” “Puentes no muros (Bridges not walls)” and “Los que estan aqui pertenecen aqui (Those who are here belong here).” On the stage, 11 chairs stood, each with a decorative silhouette. The center chair, differed and held a sign labelled, “La casa en solaridad con DACA (The house in solidarity with DACA).”

Sept. 5, U.S. President Donald Trump stated his intentions to repeal the previous executive order established by former U.S. President Barack Obama. Since this national policy announcement, the College of William and Mary’s Board of Visitors has expressed its intentions to prevent federal interference with students’ education at the College. Student protesters and activists continue to raise awareness concerning undocumented students and their narratives as another form of protection through events such as this Student Walkout for Immigration Rights.

President of the Latin American Student Union Karina Lizano-Blanco ’19 began the event by greeting everyone and thanking them for their attendance. She introduced the event as a gathering to express support for and solidarity with the 23 undocumented students at the College. She then said that the event is also — in part — a response to the series of posters that were hung in Morton Hall Oct. 9 that she said sent a threatening message to minority students, but particularly singled out undocumented students and threatened deportation. Lizano-Blanco said that no student should fear their residential status, especially at the College.

Lizano-Blanco continued by expressing gratitude toward a new campus activist group called UndocuTribe, which seeks to support undocumented students at the College by providing access to resources as well as engaging in public activism. Lizano-Blanco invited Diego, a founding organizer of this group, to the stage to officially begin the event. Diego’s last name is withheld for his protection and privacy, since he is a student recipient of DACA.

“So, what happened at the walkout wasn’t just on the William and Mary campus. It was also being done at UVA and at JMU, GMU and the NOVA campus,” Diego said. “We were just one of the schools that was like ‘This is a great idea.’ And once again, we really wanted to bring that it wasn’t about mainly the disruption of class, and I went through a lot of hurdles to make sure that professors and administration knew that it was not disruptive to the learning environment — that it was not a way to show discontent to the school — because the school has actually done a lot for our students. It was to bring visibility to the nation. It was to have students in the classroom, before people walk out, saying, ‘Why are 10 or 15 students leaving the classroom right now, what is important about that?’ That’s where the statement comes in.”

Diego said that this walkout was important to him because he is personally affected by DACA policies and wants to humanize, as well as bring visibility to the issue.

“So the biggest thing was that it really humanized the issue,” Diego said. “So a lot of people feel disconnected from issues because they are not personally affected, and that happens to everyone. This is personal to me because it affects me in more ways than one. So that’s why I feel so passionate and strongly about this. Let’s say someone else, let’s say a white, middle-class student who has never really had to think about questions of race because it’s never been a problem for them. … One of the results I wanted was that people such as these, who have never really thought about issues, to become a little more conscious. … Because what we really wanted was really just to humanize these issues and to let people know that while we do talk very abstractly about immigrants and undocumented peoples and the push factors like violence and corruption and poverty that push people away from their homes, it’s very easy to become unemotional about these issues, especially in an academic setting. We talk about the issue, not the person, but there are people affected; and I think we really got that across, especially with the testimonies and the creative works, the poems. You never know who it will touch. I have people around campus who will stop me and say, ‘Diego that was beautiful.’”

Professors, community members and students were in attendance and were speakers on behalf of undocumented students’ rights.

Two students read pieces concerning their own accounts as undocumented students, while other speakers read first-person accounts from anonymous students or elected to share poetry and other forms of spoken word in support.

One student, now a senior at the College, discussed how his high school experience was differently shaped by his immigration status. As DACA was not officially passed until very late in his high school years, he said that college was not an option for him preceding the executive order, despite being at the top of his class.

Other students spoke of their inability to obtain drivers licenses or summer jobs, often in spite of paying full taxes to the IRS for whatever informal work they completed. One speaker read an account that stated the only government agency that recognizes undocumented people’s existence is the IRS.

A representative from St. Bede Catholic Church shared the story of a friend, for whom she used the pseudonym Josephine.

In Josephine’s account, education was of import. A passage of the account said, “All of us are looking for education so that we can provide for our families and our community.”

After all the speakers, which included several professors, including John Riofrio — head of the Latin American studies program — concluded, Diego returned to the stage to read his own account. He read this in the form of a poem that detailed his father’s and family’s experiences as undocumented immigrants.

“Carlitos, he was called,” Diego said. “His life was hard. He would wake at 4:00 a.m., help his father pick the fields. It is now 6:00. He would walk an hour to the nearest bus, get to school at 8:00, leave school at 2:00, get home, eat sleep, repeat. Fast forward: Carlitos was a man now. Carlos was bright and ambitious. You see, Carlitos thought he was destined for greatness. He believed he could break a corrupt system. But little did Carlitos know God had other plans for him. Little did Carlitos know the system would break him. You see, Carlitos was a man now, so he fought his battles. He licked his wounds, he bled, he cried, he kicked, he screamed and he lost. … God whispered in Carlitos’s ear: ‘America.’ So Carlitos sought the American dream. … Like the Irish and the Chinese, we came like pigs to slaughter. America didn’t kill him; it took something more precious — his hopes and dreams.”

Sociology professor Jennifer Bickham Mendez, who was also in attendance at the walkout, said that the issue of immigration is very important, and that the College should remain a safe place for student recipients of DACA.

“This is an extremely important issue to keep in our minds,” Bickham Mendez said. “We will become, and already are, a space that will exclude [these members of our community]. They won’t be able to claim domicile. It’s incredibly exclusionary.”

One student who was in attendance, Maya Farrhenderson ’20, said that she chose to attend the walkout because as a queer student of color, it was important for her to show solidarity. Additionally, Farrhenderson said that one of her best friends is a DACA recipient.

“I think one thing that is really amazing is seeing how many students came, because I think it’s a little bit different than going to something that’s after class, like at the Sunken Garden,” Farrhenderson said. “I think this is something that was really important to have during the day and have people actually doing an act, of leaving the classroom and raising awareness. I think it was really powerful to see how many other students were also interested and involved enough to do that.”

Diego ended the event by saying that he wants students to be activists and to create a world that all students could be proud of.

“Be the leaders, the activists, the pavers of the road less traveled, so in the end we can all be proud,” Diego said.

Throughout his conclusion he said that the activism presented in the event was meant to be inclusive of all genders, sexualities and races, and that all people should be respected regardless of their paperwork status.

The purpose of the even was to bring attention to an issue in a way that any person, regardless of immigration status, could easily receive.