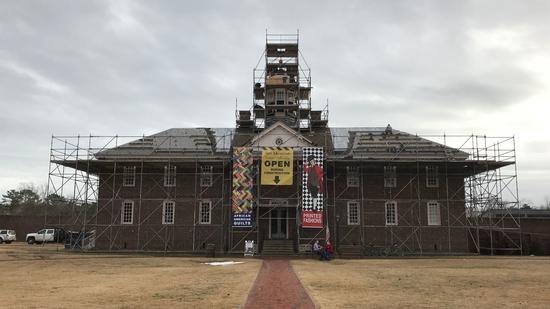 The Art Museums of Colonial Williamsburg’s $41.7 million expansion and renovation continue to progress toward a completion date of early 2020, according to Ronald Hurst ’81, who serves as the vice president of collections, conservation and museums, and the Carlisle H. Humelsine chief curator.

The renovations will bring a new wing to the block-long museums, along with a new entrance.

“You used to walk through the Public Hospital of 1773, go down through a tunnel and go upstairs to the main gallery,” Hurst said. “It’s confusing for the uninitiated, a counterintuitive experience as it stands today, which is one of the big reasons for the change.”

Additionally, Hurst said that the renovations will increase guest amenities and gallery space.

“There will also be a 22 percent increase in gallery space, and there will be, in addition to that, guest amenities like a bigger, better restaurant, basic things like bathrooms and luggage storage and a new museum store,” Hurst said. “The restaurant, store and some bathrooms will be located outside of the ticketed zone. So if you just want to come and have lunch or go shopping, you can do that. Those businesses support the education program here, so it’s in our best interest to put them where more people can get to them.”

The funds have come from private donors from all over the United States, including New York, Texas, California and Virginia.

The expansion and renovations were originally envisioned in 2001, when the property was acquired. Since then, time has been spent planning architecture, design and fundraising.

“We’ve needed to do this for a long time but pledged to ourselves that we would not undertake the work until we had actually acquired all the funds,” Hurst said.

According to Hurst, winter weather and snow have slowed down progress, but there have been no major delays.

“The first big job is to locate underground utilities — you have to get those out of the way before you dig,” Hurst said. “And so that’s taken a bit longer than expected. Sometimes you encounter things in the ground that you didn’t know were there, like the foundations of old buildings.”

Hurst also said that the construction, which began in the fall of 2017, does not currently affect visitors in any way. He said for visitors, renovations won’t be apparent inside the building until July or August of this year. Then, construction will begin on the back side of the building, which will require creating new openings in the back wall. Hurst said that these openings will not be made until the new wing has been completed to ensure that security and environmental protection is guaranteed.

For Hurst, one of the main takeaways from the construction is its goal to improve the learning experiences of visitors.

“The whole point of this is to make the learning experience more fun and pleasant and effective for our guests,” Hurst said. “We’re also in a building that is now 33 years old, and there are things in the mechanical systems that are due for replacement. This is our time to deal with those issues as well.”

As part of this attempt to improve visitors’ learning experiences, Hurst said the renovations will involve adding new technology to the museum. One goal is to add technology that amplifies the museum experience without overshadowing the artifacts. For example, Hurst said more sound sticks will hopefully be added to the instrument section of the Museums, allowing visitors to listen to samples of the various historical instruments.

“We’re also looking forward to incorporating more technology in the experience, to give people new tools for figuring out how to enjoy what they see and what they hear,” Hurst said. “We’ve just got back from museum visits in New York and Ohio, looking at our sister institutions to see what they’re doing with technology that really works.”

The Art Museums of Colonial Williamsburg consists of the DeWitt Wallace Decorative Arts Museum, which holds British and American fine art up to 1840, and the Abby Aldrich Rockefeller Folk Art Museum, which contains American folk art up to the present day, all under one roof.

The renovations will allow more artifacts and art to be on display.

“We have an awful lot that we would like to get out to view,” Hurst said.