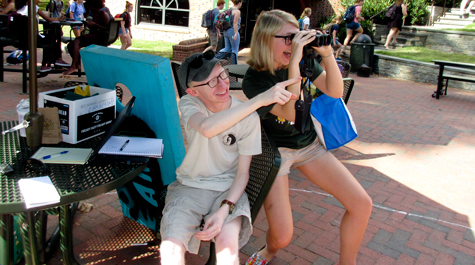 The long-standing, 1918 Migratory Bird Treaty Act (MBTA) was reinterpreted through a 41-page memorandum released Dec. 22, 2017, with the subject line: “The Migratory Bird Treaty Act Does Not Prohibit Incidental Take.” The new interpretation of the law stems from Principal Deputy Solicitor of the Department of the Interior Daniel Jorjani, who redefined the MBTA in his memo stating that the DOI will now only prosecute intentional and not incidental killings of birds.

Bryan Watts, biology professor and director of the Center for Conservation Biology, said he is dedicated to the idea that the quality of human life is very much dependent on the state of the environment and that the protection of that environment should be at the forefront of humanity’s priorities. Watts said that the recent alterations to the MBTA threaten conservation groups’ goals when it comes to bird populations.

“There is no question that this weakens our ability to protect bird populations,” Watts said. “What the memo has done is redefine ‘killing’ as only intentional killing, and excludes ‘incidental take’ from the definition of killing. By redefining the term, the solicitor has effectively eliminated [protections for] a large portion of the killing of concern.”

Human threats to birds have changed over the decades since the MBTA was first implemented. Watts said that the act was passed during a time when North America was experiencing broad scale bird declines related mostly to the hunting of birds for millinery. He said that at the time of the first implementation of the act there were large scale killings of egrets and terns in order to make popular hats and garments, as well as other contributing human activities.

“At the same time, there was widespread collection of birds; it used to be a hobby, it was like collecting stamps or coins,” Watts said. “And so people had these large collections of eggs, nests, birds, so forth. Also, at the same time there was widespread market hunting, where people made a living going out and shooting birds, that were then sold in markets. There was ongoing concern about the decline in populations here in North America, and there was an attempt through Congress, there were a couple of bills attempted to be put through Congress, that were unsuccessful, and so the strategy of having an international treaty was dreamed up.”

The initial reason for implementing the law was to stop the widespread, intentional killings of birds. This has changed since 1918. Watts said that in more recent decades, the act has served as the primary legal tool to protect bird populations in the United States. Watts said that because parts of the law are vague, regulatory agencies, in this case the Fish and Wildlife Service, need to interpret these passages to be able to apply the law on a daily basis. These interpretations are issued in the form of memos, such as Jorjani’s.

Watts said that cases of incidental take are common.

“There are many of these cases. They oftentimes involve corporations that are resource corporations, but there are many other applications of this, it could be an actual government agency that has an incidental take,” Watts said. “This happens oftentimes with military bases, where there is some issue that happens, and the responsible regulatory agency may suggest to them how to mitigate the problem and reduce the mortality.”

Under the new interpretation of the MBTA, perpetrators of incidental take are no longer punished.

“[The] BP [oil spill] for example, would no longer be considered under the Migratory Bird Treaty Act because it was not an intentional killing, it was incidental take,” Watts said. “That is the unfortunate thing about using memos to interrupt and apply the law, when somebody else comes into a position of power they can change the terms and that effectively changes how the law is applied. If this is upheld long-term, I am sure there will be challenges to this, but if it is upheld, there is no question in that it weakens the ability of the Migratory Bird Treaty Act, number one, and number two, the Fish and Wildlife Service, as a regulatory agency to protect birds long-term.”

Watts said that he thinks complaints from the energy sector are behind the change to the MBTA, noting that he has not spoken to anyone in the conservation field who is in favor of the change.

“The greatest impacts will be in restraining the Fish and Wildlife Service’s ability to mitigate large kills,” Watts said. “What is behind the change is complaint by the energy sector, wind or mining, oil drilling, those types of industry to be penalized for killing birds, and so those populations that are most vulnerable to the energy sector are likely to bear some of the initial impacts. But it is widespread, this change has far-reaching implications for bird populations in North America.”

In addition to unrest among the conservationist community, The Bird Club of William and Mary is also responding to the MBTA changes.

BCWM President Megan Massa ’18 said that the club helped to get the Muscarelle Museum of Art’s lobby windows and some windows of the Earl Gregg Swem Library treated to prevent birds from mistakenly flying into the windows. Massa said that the club targets the windows around campus that are known for killing a large number of birds, and that it is hoping to treat more windows in the near future, such as those in the new Integrated Science Center walkway.

The new definition of the MBTA no longer promotes legal actions to be taken in the event of accidental or situational killings of birds. Massa said that this ramification may be felt on campus and make it more difficult for BCWM to push for window treatments, as now there are no legal consequences for the indirect, unintentional killings of birds.

“Before, the MBTA could be invoked for accidental bird deaths, not just intentional ones,” Massa said in an email. “For campus, the biggest impact is that the MBTA is no longer a legal motivation to prevent bird deaths. Many buildings on campus kill birds, [as] glass windows reflect trees and sky, a bird tries to fly through it and it dies from the impact. These deaths are preventable, but getting treatments on the windows is usually expensive. One reason to justify that expense was that those birds’ deaths were illegal, even though they were killed accidentally. I hope that building managers will still be receptive, but there isn’t a legal reason under this interpretation.”

According to the Fish and Wildlife Service, an average of 303,500,000 birds die from “building window” collisions annually. Massa said that there are easy ways to prevent these accidental deaths.

“It’s estimated that domestic buildings are a huge source of window-strike deaths, so anyone can take action in their own home,” Massa said. “Covering your windows, even just having the blinds down, can keep birds from hitting them and dying. Putting reflective decals on the outside of windows or hanging tape on the inside can break up the reflections. And if you see a dead bird on campus, you can email the Bird Club about it. It’s important to know when and where birds die so we can work to prevent it, even without the MBTA.”

Watts said that the changes to the MBTA put more pressure on the shoulders of conservancy groups and that these groups must look to the public for assistance in supporting bird populations.

“In terms of how we do work, I think it really puts the burden [on conservancy organizations],” Watts said. “Let’s say we are talking about a generic corporation, [and that] over the past few decades they have acted or behaved in a certain way in order to protect birds and not be liable to [MBTA]. Now, [because of the changes to MBTA], [this company] has been brought out from under that particular concern. So, the next option that we have is to effectively put them in front of the judge of public opinion.”

Watts said that most corporations are upstanding and will continue to take precautionary measures to protect birds, even without the impending threat of legal ramifications; however, he said that public opinion can be a strong tool when companies do not comply.