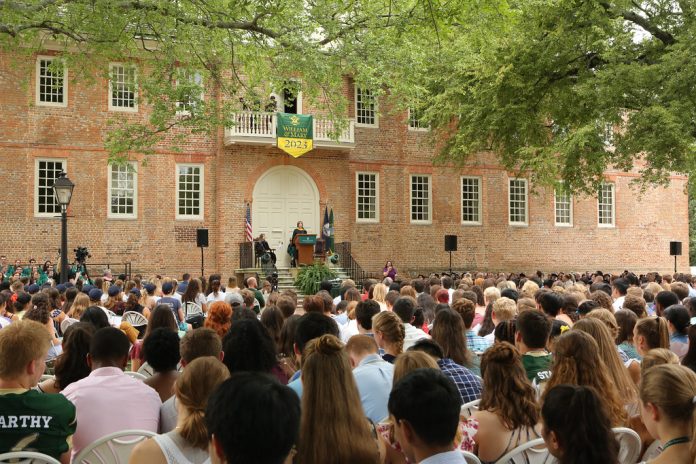 It was not yet 6 a.m. when the earliest splinter of sunlight pasted itself against the wall adjacent from the dorm’s lone window. I hadn’t slept, but these moments would be the final throes of nightmare induced by temperatures above the fever pitch. The sleepwalking city outside had long since frozen over. It was ironic that the sun shone in Milwaukee on my final day attending Marquette University.

I would need a few extra fingers and toes to count how many days it had been since the last time I’d seen that heavenly sphere of burning hydrogen illuminate a cozy blue sky. I let my mind meander toward my new chosen home, the College of William and Mary.

The sun must shine there quite often, I thought.

Everybody should know the rare moments between textbook readings here at the College make for rather idyllic times for introspective reflection. A vast majority of my freshman days were quite cataclysmic. The perceptual benefit of the transfer experience has been second to none with the ability to juxtapose college culture outside Williamsburg to our swampy home.

I can’t recall a day with winds below 12 miles per hour at best. One step outside transformed my curly mop-top into a wig for Art Garfunkel. The girls didn’t think that was cool. If the girls didn’t think you were cool, then you probably weren’t. As a result you’d spend nights alone in an ill-lit dorm complex eating PB&Js and listening to Joy Division until at long last you’d be graced with the pleasure of doing it all again the next day.

Monotony was killer. Those who were deemed cool earned the privilege of following the girls around to frat parties like lion cubs being led to the watering hole. They listened to much more jovial tunes including: Mo Bamba, Sicko Mode and Mo Bamba. Of course, this routine only lasted the two months warm enough to go outside, at which point the populace would take their Tinder swiping talents indoors. For the duration of the year, cool kids and losers spent long days and nights under one frozen roof.

When the day of work was done and we all nestled in together, the only pastimes on the minds of most were to drink and play video games; this must be how coal miners in Siberia feel. Something which really came to surprise me about the culture at Marquette was how afraid people were to express themselves.

In the men’s wing, wagers were made over who could sleep with the highest number of women by year’s end. Success of your favorite football team determined the quality of your character.

Getting alcohol poisoning and living to tell about it earned a badge of honor. Hosting an open mic night was seen as a radical idea. I see stages set up every week here at the College where a student can display their passion for all, without fear of shame to hinder the act.

Our community is special because it is built on mutual respect between everybody. You can be a goofball, a nutjob or just plain uncool; the Tribe loves you all the same. You don’t have to have over 1,000 Instagram followers or wear Vineyard Vines to feel at home here, and that’s what I appreciate most. For the first time in a long time, I feel free to delve into new activities. I’m a former jock who practices ukulele and collects classic literature.

I do so without apprehension because I live in an environment that isn’t comprised of critics, but rather takes a genuine interest in celebrating each new member’s unique outlook as to why we choose to run ourselves through the gauntlet that is academia at the College. It hasn’t taken long to fall madly in love with a place where the so called “social spectrum” is obliterated. The purest versions of our strange selves are set free. Speaking from experience, you’d be hard-pressed to find a college experience more cool for the uncool. This is our sanctuary. I can only hope that it stays weird.