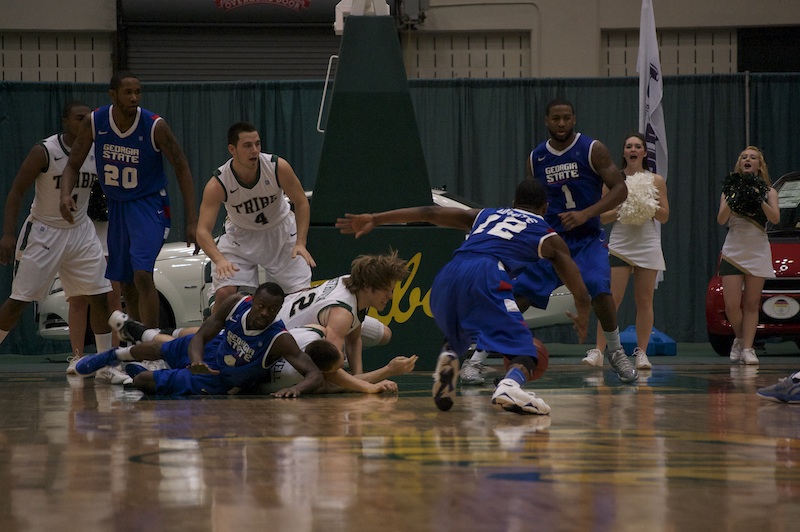 Poor shooting and costly turnovers derailed an otherwise determined effort from William and Mary as the Tribe fell to Georgia State 64-60 in its regular-season finale Saturday.

Despite outscoring the Panthers by seven in the second half, the College (6-25, 4-14 CAA) was unable to dig itself out of a first-half hole that stemmed from a 6 minute, 37 second scoring drought in the second half.

“The difference in this ballgame was our turnovers,” head coach Tony Shaver said. “They’re top 15 in the country in almost every defensive category you want to look at and we scored 38 second-half points against this team. It’s pretty amazing really. But we had a lot of mindless turnovers; and it really hurt us.” (More after slideshow).

Georgia State (20-10, 11-7 CAA) held a 13-point lead with 4:33 to play in the game, but the College stormed back, ultimately cutting the deficit to just three after junior guard Matt Rum buried a transition three-ball with 52 seconds to go. The Tribe then launched a full-court press, successfully guarding the inbound at first and forcing the Panthers to burn a timeout. But Georgia State got the ball in on the second try, and rather than trying to make a defensive stop and get the ball back in a one-possession game, Shaver called for an intentional foul, sending Devonta White, an 80.5 percent free-throw shooter on the year, to the line. White hit both, and McDowell missed from downtown on the Tribe’s next possession, effectively ending the game.

The improvement in the College’s play from the last time the two teams met wasn’t lost on Shaver or his players, though. Back on Dec. 3, the College was blown out by the Panthers in Atlanta, 66-34.

“We went head-to-head, toe-to-toe with one of the better teams in our league,” Shaver said. “One of the great gauges as a coach for your team is how much you’ve improved, and Dec. 3 we were absolutely embarrassed in that basketball game. We’re still not a complete team, but we certainly weren’t then, so I am proud of the improvement this team is making. … This last week is as close to being a complete team as we’ve been all year long.”

The two teams went blow-for-blow in the opening part of the first half. A 13-2 run gave the College a 15-10 lead at the 12:26 mark. The Panthers then rattled off six straight to take a one-point lead before senior guard Kendrix Brown blocked a Georgia State shot and hit a layup on the other end to regain the advantage. From there, however, the Panthers ratcheted up the defensive intensity, applying pressure all over the court. It worked, and over the next 6:37 the Tribe turned the ball over five times and went 0 for 6 from the floor. By the time McDowell stopped the bleeding with a three-pointer at the 2:58 mark, the damage had been done and Georgia State was up 31-20. The College went into the locker room down 33-22.

The Tribe shot just 34.8 percent from the floor — 2 of 10 from downtown — in the first period, while turning the ball over eight times.

“I told our guys at halftime, ‘There’s nothing Xs and Os I can tell you that’s going to help us win this game,’” Shaver said. “It wasn’t our defense, it wasn’t the plays we were running, it was our turnovers that were killing us.”

Still, the College would make some halftime adjustments, switching up defenses and holding the Panthers to just 35.7 percent shooting over the final 20 minutes.

“We mixed up defenses in the second half. We played a triangle-and-two for the good majority, and I think that gave them problems,” McDowell, who finished the game with a team-best 11 points on 3 of 7 shooting and nine rebounds, said. “Part of our game plan was to make them hit outside shots, but to give them credit, they did and that forced our hand to do something different … that worked well in the second half.”

The Tribe also cut down on the turnovers in the second half, finishing the game with 13, but it wasn’t enough to overcome the first-half woes.

Having played their final games at Kaplan Arena, McDowell and Brown reflected on their time in the green and gold.

“The last four years from a wins and losses standpoint have not always gone the way I envisioned,” McDowell said, “but I wouldn’t trade the last four years for anything. There’s definitely some sadness [in playing at home for the final time] but I guess they told me they weren’t going to let me come back.”

“I’ve learned so much and grown so much, from maybe the losses more than the wins,” Brown said. “I’m going to miss my teammates. Going through these four years with Quinn and JohnMark, I don’t think there’s any two guys I would’ve rather gone through this journey with.”

With the loss and a James Madison win, the Tribe slid to the No. 10 seed in the upcoming conference tournament, which means the team will play Northeastern Friday in Richmond. The College lost in Boston when it first took on the Huskies Jan. 14, 64-50. But Feb. 11, when Northeastern visited Williamsburg, the Tribe notched one of its most impressive victories of the year, blowing the Huskies out, 79-54.

Over the final two weeks of the regular season, the College went 2-3, including the four-point loss to Georgia State and a two-point loss at No. 1 seed Drexel.