Home Latest News TV is a Tri-cornered Hat With No Middle: The Conundrum that is...

There are a lot of ways a show can be called successful, and networks love to throw them out as sound bytes during promos. Surely you’ve heard them: “Winner of 3 Emmy Awards for Outstanding Comedy”, “The most-watched drama”, “with guest star, Academy Award Winner Blah Blah”.

Those are probably the most visible ways a show can be successful. It can be a critics darling and universally loved on blogs and trade magazines, it can be a ratings success and make the network millions, or it can be an awards success, winning every Emmy, Golden Globe and Screen Actors Guild award there is. The worst part is that shows are rarely, if ever, achieve all three. Even the most successful shows demonstrate only two, but most only ever manage one.

Let’s take the top five shows, ranked by total viewers. Though numbers vary from week to week, the top five don’t change much. In order: NCIS, NCIS:LA, Criminal Minds, Two and a Half Men, and Modern Family. Of those five, only the latter was nominated for a series Emmy last year. It’s been a full three years since Two and a Half Men has seen the short list (and rightfully so, thank you very much), and the only nominations the rest have gotten are for stunt direction and guest stars.

When ratings-successful shows do get nominated, such acclaim is rarely deserved. Two and a Half Men has never been funny or watchable enough to deserve an Emmy, and even Jon Cryer’s seemingly perpetual Best Supporting Actor nomination is widely considered to be a consolation prize for putting up with Charlie Sheen for eight years. You could try to convince me that anyone besides Chris Colfer deserves gold for Glee, but you’d fail.

So there are shows that get the numbers — the ones that draw your little eyeballs to the screens — but then there are the shows that critics absolutely adore, and unfortunately, overlap in this area is a rarity. Community is the current favorite, and the only Emmy it’s won is for Outstanding Animation for last season’s Christmas special. Arrested Development held the pedestal position in the past, and though it did win Emmys, it was cancelled after three years for dismal ratings. Friday Night Lights is another example, and though it was saved from the axe by an innovative distribution deal with DirectTV, it was only nominated once, in the last year of its five-year life.  Veronica Mars never saw the short list in its three years, and neither did Buffy the Vampire Slayer, or Pushing Daisies, or Firefly… the list goes on and on. Cougar Town is another critic favorite, and there’s a decent chance it’ll never touch Emmy gold (or unfortunately, a fourth season).

Next we have the award winners. These are the shows that continually show up on the short lists for the Emmys, the Golden Globes and the SAG Awards. 30 Rock is an award favorite – their nominations and wins read like a laundry list. Other favorites include Modern Family, Mad Men, and despite my begging and pleading, Glee is yet another.

The highest correlation between two categories is, undeniably, critics’ favorite and awards darling, but not always. Critics don’t decide the Emmys or the Golden Globes – that’s the Academy of Television Arts and Sciences and the Hollywood Foreign Press. In theory, the honored shows would be the cream of the crop, truly the best television has to offer. The actors would be the funniest, have the most range, and be the most talented. However, consider this: Steve Carell has only won one statuette, a Golden Globe in 2006 at the very beginning of The Office, for his role as Michael Scott. Alec Baldwin has eleven for his Jack Donaghy. You tell me — is Jack Donaghy really 11 times funnier than Michael Scott? If yes, are you watching a different version of 30 Rock and The Office than me?

In a perfect world, the shows we love would be the ones winning all the awards, without outstanding Nielsen ratings and all the critical acclaim they could handle. That’s not the way the television landscape is though. No, that landscape is rocky — a few high peaks, and a lot of valleys. Mostly, shows are trying to clamber to the top of whatever summit they can manage, all without hurtling gracelessly to their deaths.

Anyone in the industry will tell you that TV is a rough place right now. There are no guarantees, no one to lend a sympathetic ear, and there are nearly no second chances. Shows get struck down left and right without so much as a chance to find their footing or to become the very best they can be with the talent they have on board.

The internet has changed the way we do a lot of things, and that includes watching TV. As soon at networks can find a way to appropriately monetize (read: advertise), internet popularity will become another form of TV success. It’s the wave of the future, and it’ll open up so many different doors for shows that no longer have a place on broadcast networks. But until that happens, we’re stuck with what we’ve got.

As such, I’d like to enter a final plea: Please stop watching Glee. 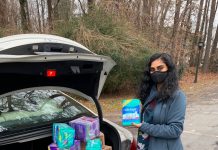