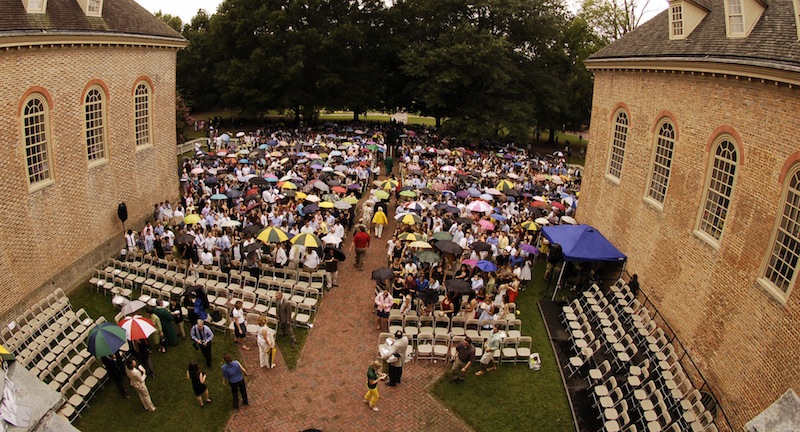 Newly admitted students are already making an impact on campus. The class of 2016 stands as the most diverse applicant group to the College of William and Mary, breaking applicant records for the eighth year in a row.

The College sent 4,250 acceptance letters for the class of 2016, anticipating a class size of 1,470. The Office of Undergraduate Admission handled 13,600 applications, a record number of applicants.

“We’re excited by all the possibilities that we see in this class,” Dean of Admission Henry Broaddus said. “Our job is about trying to look for glimpses of human potential, and those glimpses this year have been really exciting.”

The students admitted to the class of 2016 also set records as one of the most diverse classes. Almost 33 percent of admitted students are of color, which is an increase from last year’s 31.6 percent. Broaddus stressed that this will help increase diversity at the College, especially for underrepresented groups, and add to the experience of all students.

“In order for William and Mary to produce leaders and people who are going to [be influential] and to be sure that [students are] going to navigate an increasingly diverse world, we have to make sure that the college reflects that,” Broaddus said. “We want to seek talent from all quarters and all communities; the diversity that we see in this group is a very healthy indicator.”

International applicants, especially from western Asian nations such as China, also contributed to the growth in the applicant pool this year.

“We, and most universities, are seeing a growth in international applicants,” Broaddus said. “The emerging middle class in China is looking at universities in the United States, and we’ve found ways to attract that group.”

The Admission Office has found new ways to attract more applicants to the College, such as increasing the number of interviews available to potential students and, most recently, with their launch of the “Ampersand Box.”

“The Undergraduate Admissions office launched a few new initiatives this year. They expanded the summer on-campus interview program. They launched the popular ‘Ampersandbox,’ a new interactive view book. They continued to be active through social media, including blogs, Facebook and Twitter,” Director of University Relations Brian Whitson said in an email.

The increase in applications resulted in an increase in competition at the College. The admittance rate fell from 34.6 percent last year to 31.1 percent this year.

“The increase in the applicant pool has outpaced the growth in class size,” Broaddus said. “It does create challenges for our committee. We’re seeing more and more really high-achieving students, and we’re put in the decision of having to make more difficult choices between highly competitive students. It leads to a great deal of disappointment, and we’re greatly sympathetic to that. They were still exceptionable, and they will go on to have great college careers.”

The class of 2016 boasts strong academic achievements. Approximately 88 percent of admitted students finished in the top ten percent of their graduating class. SAT scores remained similar to previous years — the 50th percentile for SAT Critical Reading and Math scores was 1300 to 1510, as compared to 1300 to 1490 for the class of 2015. The median score was 1400, equivalent to that of the class of 2015.

Broaddus credits the number of strong resumes from applicants to the quality of education at the College.

“It’s the idea that at William and Mary you can get an academic experience that is on par with any that you can get nationally and superior to the vast majority,” Broaddus said. “You get that through the combination of access to a first-class faculty and the kind of human scale here — the fact that we continue to be so appealing has everything to do with how strong the experience is.”

“It strains what we do,” Broaddus said. “It has meant that assistant deans in this office are working longer hours and doing more reviews than ever before. But what is really great, is that the team that’s here in the Admission Office is very committed both to William and Mary and to the students who entrust us to make decisions on their college applications. We’ve got a staff here who works hard and doesn’t take short cuts despite the fact that we have so much volume.”

Broaddus emphasized that the extra work only signals great potential for the future at the College.

“That’s the very challenge that we have to embrace,” Broaddus said. “It’s the challenge that means we’ll bring that much stronger of a class through the [Sir Christopher] Wren building in the fall.”

The work will continue for the admissions staff as they prepare for the Day for Admitted Students, which will be held for the class of 2016 tomorrow. Approximately 3,000 visitors are expected to attend.

“We’re delighted with this group of admitted students,” College President Taylor Reveley said in a press release. “As usual, William and Mary has attracted an extraordinary group. This is an exciting time to be part of the College community.”