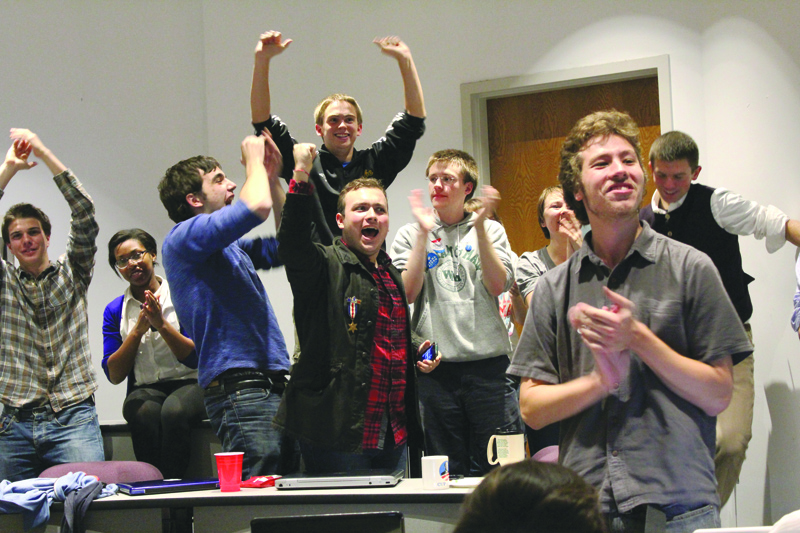 Late Nov. 6, members of the Young Democrats gathered in a room in Blow Memorial Hall to watch as the election results came in.

Cassie Berman ’14 attended the event after voting earlier that day and noted that attendees were on the edge of their seats early in the night.

“There definitely was an air of excitement,” Berman said. “Romney and Obama were still pretty tied up. People seemed pretty confident but not over-confident.”

Intense political fervor swept through the College of William and Mary on Tuesday, along with tidings of tremendous energy. Students with diverse political inclinations cast local as well as absentee ballots, lending their voices to the climactic conclusion of a heated 2012 election cycle.

More than 7,700 residents of Williamsburg came to the polls on Tuesday. More than 1,000 voters turned out for this election than in the last election cycle in 2008.

When Ryan Warsing ’15 made it to the polls on Nov. 6, he wasn’t prepared for the long wait.

At the College, the Student Assembly played an integral part in the efforts to get out the student vote at the College.  The Student Assembly’s Director of Voter Registration Zachary Woodward ’14 said that the SA distributed flyers with election information, provided rides to the polls and answered questions from students throughout the day Tuesday.

Woodward presumed that student turnout at the College was particularly high in this election.

Social media revealed a large amount of political expression leading up to the election. The community Facebook page “Overheard at William and Mary” showed over 30 posts about the election in just 24 hours Nov. 6.

“I was blown away by seeing the political involvement of my peers during the election process,” Gaspari said.  “While the [Facebook] posts and comments may have been irritating at times … I was impressed at the passion I saw underlying them.”

Political organizations like the College Republicans and the Young Democrats worked to inform and motivate voters on and before Election Day.

“We ran a great campaign, we ran an amazing campaign,” College Republicans member Evan Maraist ’14 said. “We put up record numbers here in the Newport News area. … I guarantee you we will win next time around. Today is Day One.”

“In the last two days alone, we made over 12,000 phone calls over cell phones,” Maraist said. “I’m extremely proud of every single one of my volunteers.”

All organized efforts to turn out student voters and facilitate voting on Tuesday aside, the College’s voice in the election ultimately came down to the actions and experiences of the individual student voters.

Jarrell Raper ’15 said that he had a wholly positive experience at the polls on Tuesday.

“It was my first time [voting], and it was exciting to know my vote was counted and helped Obama win Virginia.”

Gaspari walked away from the polls content with the experience.

“Winners and losers aside, this was the first election I was able to vote in, and it was a very rewarding experience to vote,” Gaspari said.  “I felt a sense of very real investment in my country and its future.”